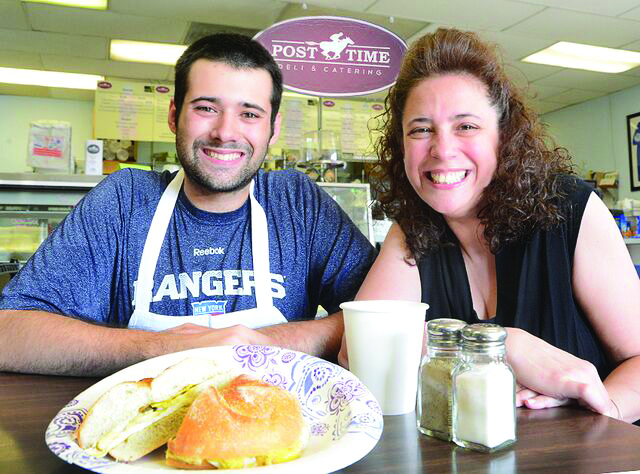 Â©2015 Saratoga Photographer.com Suzanne Pratt and son Thomas MacDonald are part of the new ownership of Post Time Deli and Catering in Gansevoort, where deli sandwiches, soups, burgers and fries are among the offerings.

Long-time Gansevoort restaurant Post Time Deli
and Catering is under new ownership. Husband and
wife Bernard and Suzanne Pratt, along with their
son Thomas MacDonald, assumed ownership of
the deli in May under the company TogaTown Inc.

The eatery, located at 654 Saratoga Road in
Gansevoort, has operated under several names,
opening in 1984 as Cannone’s Deli. Eventually the
Kelley family took over the business and it was
renamed to Kelley’s Deli. The business switched
hands again in 2009 and the name was changed
to Post Time Deli and Catering.

The Pratts have been coming to the establishment
for several years and for them, being owners of
this restaurant brings back memories of family
and friends.

“We’ve come here since it’s been Kelley’s,” said
Suzanne Pratt. “We would eat here or take out. The
breakfast sandwiches were very popular for us to
come in and order when we were running around
with the boys … This is our hometown, this is our
neighborhood.”

“I love coming to work every day with my family. It’s something to pass on to future generations,”
she said.
The Pratts want to bring the deli back to how it
operated as Kelley’s Deli. They believe that was the
height of its success and how so many customers
knew and loved it … The feeling you get when you
walk into your own kitchen. I couldn’t see it being
anything else.”

Breakfast sandwiches are one of the most popular
items on the menu, she said. Customers can get
sandwiches with egg, cheese, and meat. One of
the items is a “heart attack sandwich,” consisting
of two eggs, cheese, bacon, ham, and sausage, all
on a hard roll.

Post Time also offers catering. They cater for a
wide variety of occasions, from trackside parties to
backyard barbecues, to family reunions to bridal
showers. Available items include sandwiches, salads,
hot items such as sausage and peppers, chicken
fingers, French fries and more.