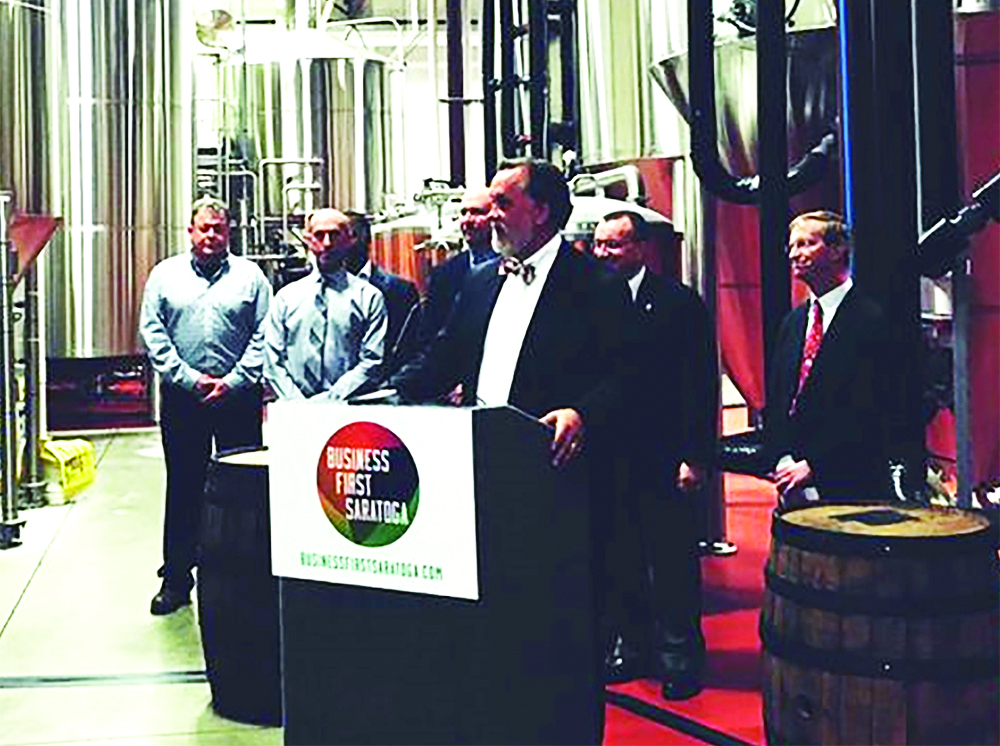 Marty Vanags, president of the Saratoga County Prosperity Partnership, speaks from a podium at Shmaltz Brewery in Clifton Park where the Business First Saratoga initiative was announced.

Through problem-solving and advocacy, Business First Saratoga serves local business owners by developing relationships to better understand the opportunities and challenges of doing businesses in our region, the three organizations said in a news release. Some areas that this program can assist businesses with are workforce development, financing, international markets access, government regulations, resources for small businesses, and utilities.

“When people think of economic development, they often think about the big attraction projects. While that’s incredibly important, we also need to pay attention to the businesses that are already here in Saratoga County, whether they’ve been here for a year or are a multi-generational business,” said Marty Vanags, president of the Saratoga County Prosperity Partnership. “A program like Business First Saratoga is an organized and deliberate way to build the foundation for our region’s future growth.”

The Partnership first outlined its intention to launch a business retention and expansion initiative in its two-year economic development plan, the Saratoga Strategy, released in December. In that plan, the Partnership also identified potential partners for the initiative and has since undergone training with both the Saratoga County Chamber of Commerce and Chamber of Southern Saratoga County.

“Our Chamber’s board of directors voted unanimously to approve our participation in the Business First Saratoga initiative because we believe in pulling out all of the stops to help local employers to succeed, grow and thrive,” said Todd L. Shimkus, president of the Saratoga County Chamber of Commerce.

“We believe working together with our partners in this venture and other organizations that might join us in the future will help us to open more doors and to close more deals creating more jobs and investment in Saratoga County.” he said. “To win in economic development these days, you must first win by helping existing local employers to take advantage of new opportunities or to overcome challenges individually and collectively and that’s what this initiative promises to do.”

Pete Bardunias, president and CEO of the Chamber of Southern Saratoga County, said the southern part of the county “will be well served by this initiative. Our business needs are often unique, and we need to fully understand the complex dynamic that makes our area a leading force in marine, manufacturing, agriculture, and transportation, among other important industries. Our geographic location straddling various supply chain routes, plus our proximity to urban centers which have given rise to a strong service sector, has helped fuel our chamber’s rise to third largest in the Capital Region, and positions us well to be an effective partner in the effort to help local companies thrive, expand and prosper.”

Saratoga County business leaders, some of whom have piloted the initiative, spoke about the value for businesses and encouraged their peers to participate.

“We share the challenges of workforce development and global markets,” Raj Ghoshal, vice president of Polyset in Mechanicville. “Saratoga County is home for us. We have very deep roots here. As our business continues to expand, we certainly want to focus first on expanding here in Saratoga County to help us serve the entire world.”

“While my business enables me to travel all over the globe for clients, I’m proud to say our headquarters is right here in Saratoga County,” said Nathalie Whitton, president of Site Solutions Worldwide in Clifton Park. “Business First Saratoga is a proof point that the Partnership and our chambers understand that listening to and assisting existing businesses like mine is essential to keeping Saratoga County viable. It is well worth a business owner’s time to sit down and speak with someone from Business First Saratoga.”

Shelby Schneider of Shmaltz Brewing Co. in Clifton Park, where the initiative was announced, said the initiative “is going to be critical in to help Shmaltz Brewing Co. stay connected with the public, private and academic sectors. On the day-to-day, we’re very busy doing our business, but it’s the local connections that help us grow. They help us grow jobs and help us make new investments in our company.”

“This is exactly the type of initiative I expect and welcome from my economic development organization,” said Tony Panza of Panza’s Restaurant on Saratoga Lake. “Saratoga County business leaders face unique challenges and I appreciate that someone is taking the time care and feed those of us who have already invested here.”

Saratoga Springs Mayor Joanne Yepsen said “it is imperative the city government include and partner with the private sector to build a successful, sustainable economy. Much of our pro-active economic development efforts rely on listening to and responding to small business needs.”

She said the initiative “shares our approach and is critical in our city’s long-range planning.”

“Business First Saratoga raises the bar for our market area by helping to make our companies agile, adaptive and able to compete locally and globally,” said Arthur “Mo” Wright, chairman of the Saratoga County Board of Supervisors.

For more information on the program, call 871-1187 or visit businessfirstsaratoga.com.