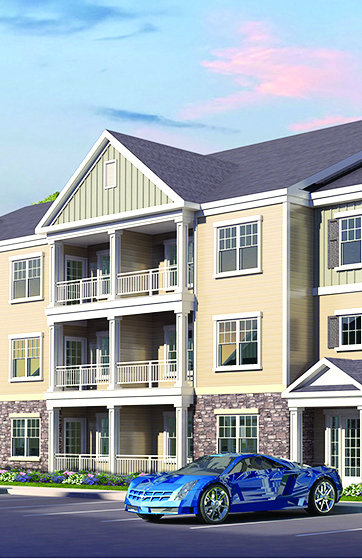 This is a rendering of apartments Conifer Realty plans to build on Route 67.

A 17-acre plot on Route 67 next to East Line Road will soon provide 163 apartments for people working in and around Ballston Spa, according to the developer, Conifer Realty of Rochester, which closed on the purchase of the property on July 1.

The land was purchased from Hal Schultz, a real estate developer who had been working to develop and market the property since 2007.

Brian Donato, project manager at Conifer, said his company paid approximately $2.5 million for the land that will become Blue Heron Trail, a four-phase residential development that may also include about 10,000 square feet of commercial lease space in the final phase.

That’s approximately $150,000 per acre and on the low side of market value, Donato said.

A good price was only one aspect that made this deal attractive to Conifer. The location is a busy corridor on the north side of Route 67 and a comfortable commute for the growing employment possibilities in the immediate area, including Malta's technology park businesses.

Moreover, the property was already zoned for apartments.

For some time, Conifer had been looking out for an ideal location for affordable housing and brokered the purchase through Re/Max in Clifton Park, Donato said. This is the first project in the Saratoga area in a while for Conifer, which specializes in workforce rentals as opposed to market-rate rentals, the type that comprise the bulk of the newer luxury apartments and townhouses in Saratoga County.

"Our rents at Blue Heron Trail will be lower than market," Donato said. "That is our niche."

By receiving funds from the state, Conifer and similar owners/developers are able to rent units at a variety of price ranges, Donato said. The state requires that the company research area rentals and match monthly rates to their research and to census data. Consequently the units at Blue Heron Trail will be home to a mixed work force.

Presently, the company is working through the approval process for phases one and two.

On the environmental side, the SEQR process has been completed and no issues were discovered, according to Donato. SEQR is the State Environmental Quality Review that identifies and mitigates the significant environmental impacts of a proposed development, per the state Department of Environmental Conservation.

Conifer has selected the architectural firm of Barton Partners of Philadelphia, which has partnered with Conifer in the past on affordable housing developments. The civil engineer on the project is Environmental Design Partnership of Clifton Park.