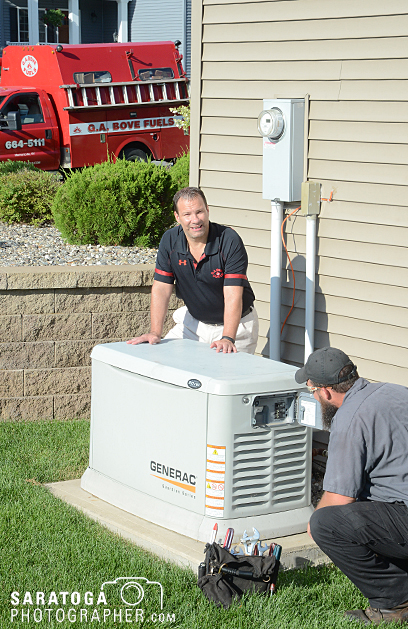 Trends in the heating, cooling and insulation fields and the sciences behind them project lower costs and greater efficiency, say the experts.

John V. Bove Jr., CFO of G. A. Bove and Sons Inc. of Mechanicville, said his company is experiencing an uptick in propane systems and delivery, especially in new residential construction.

“Propane is very versatile,” said Bove. “The fuel is very similar to natural gas, but gas lines have to stop somewhere.”

A new residential neighborhood may not have been piped for natural gas, although the utility may add lines later on. Meanwhile, propane gas has diverse uses, including heating, hot water, cooking, cooling, fireplace inserts, outdoor grills and fire pits, even for heating the pool, Bove said.

“It’s one source for winter, summer and everything in between,” said Bove.

Among older homes or businesses, it is an easy conversion to propane or natural gas as older oil furnaces reach their life expectancy.

“Schools used to use oil, but it was not good for the environment. You cannot retrofit an old number six boiler, so the schools converted to gas or propane, which was cleaner and cheaper,” Bove said.

Fuel pricing is a function of supply and demand; rates go down with use and up when the commodity becomes scarcer, and always in the winter.

Bove credits domestic production, specifically hydraulic fracturing, with keeping supplies healthy and rates reasonable. Fracking is controversial because it uses another precious commodity, water, to release oil or gas from deep within the earth and some believe contamination risk is too great to be an effective option.

"Five years ago the percentage of fuel consumed domestically and produced in the U.S. and Canada bottomed out at 26 percent. Today the figure is 60 percent," Bove said.

He said low fuel prices are 100 percent correlated with fracking. Like it or not, the process is one that helps alleviate foreign dependence on fuel.

Such foreign dependence, along with any instability in the political situation in the Middle East or South America (what if the Suez Canal shuts down, he asks), means that the fuel market becomes less controllable, which in turn translates to more risk, he said.

When Bove's grandfather started the company in 1930, he initially delivered coal and then home heating oil. Today, G. A. Bove delivers diesel blends, gasoline, winter blends, wood pellets, kerosene and propane, and has a large staff that services and repairs all kinds of heating and cooling systems.

"Service is set up to get to our customers the same day they call, and we will service natural gas systems or those we don't deliver fuel for," said Bove. "My father said, if someone has an emergency, we don't stop working until they have heat."

Growing up in the business, Bove has first- and second-hand knowledge of embargo, recession, and any number of pressures on fuel pricing. He predicts a small increase in crude oil prices this season. There will always be some daily volatility, he said, because fuel is not being stored in the quantities it used to. Half the terminals at the Port of Albany and Port of Rensselaer are closed.

The industry uses a "just in time" inventory method. Barges for Mobil, Exxon and Gulf used to arrive in summer and fill up the tanks for winter, he said.

"Now they bring what they think they'll need in the next week," said Bove.

Propane pipelines were introduced in the U.S. 50 years ago. But they only bring so much fuel to the area, he said.

"It needs to get here sooner and more efficiently," Bove said. "Lower fuel storage has to do with upkeep, cost and declining industry upstate."

Customers cannot control external forces, but they can elect to lock in prices before the perennial mid-winter increase by using one of the payment plan options Bove offers, he said.

Customers can do a fixed-rate budget over 10 or 12 months, clients' choice, based upon predicted usage. The other option is to make prepayments.

"You can lock in a price and the price actually go down in the winter, but 80 percent of the time it's a good economic decision to budget," he said. "Over the years, prices average out and clients get a better deal with a budget arrangement."

Businesses do it so they know what their expenses will be for their budget numbers, he said. Locking in is especially popular among agricultural clients.

"It is not that agriculture doesn't want the best rate for fuel. They don't want to budget $20,000 and then fuel costs are $30,000," he said. "Some have already sold their corn so they absolutely need to know their costs."

Like corn, fuel is similar in how it reacts to today's marketplace, Bove said. "It's not like the old days when you go to market and see what you'll get."

Gerald K. Davis said his company, Superior-Co-op HVAC in Ballston Lake, is trending with the popularity of geo-thermal heating and cooling, sparked in part by generous federal and state tax credits and National Grid rebates.

No fuel is necessary for these heat pumps, unless the back-up system of choice is gas or oil-fired. The ductless units he sells and services run on electricity and the back-up kicks in for a few hours if it gets too cold for the primary unit to operate, which is 15 degrees below zero, he said.

Popular now are ductless units that hang on the wall. There are different types of units, and Davis commented that none are manufactured in the United States. All both heat an cool. And all are far more efficient than traditional systems.

"The federal government requires central heating systems to have a minimum SEER of 13 and Energy Star starts at 16 SEER," Davis said. "Ductless systems have a 17 to 25 SEER, double that of traditional HVAC systems."

The beauty of ductless is that the homeowner or business can zone off different rooms and heat or cool as needed, rather than the whole house, he said. Theoretically, one room can be heated as another is cooled.

A heat pump is air conditioning in reverse," said Davis. "Air conditioning doesn't actually cool. It removes heat from inside." He likened heat pumps to an automobile geared to go forward and backward.

"Going forward, the ductless provides such great efficiency, especially in retrofits," said Davis. "If heating a house with oil, we try to get clients to convert to high efficiency models, which offer rebates and tax credits."

A tax credit is available up to a certain percentage and dollar limit. However, such credits are against an individual's income tax liability, which can be much less. But rebates from National Grid are not restricted by income.

Davis said his clients are not new construction. He offers "a higher-end product that is much better than builder-grade" and is very versatile, albeit more expensive.

"With ductless, we can put a bigger unit in a home for an open floor plan. Or we can put in one unit per room, which can be set to any temperature desired and close the door," he said.

Much efficiency is lost on any heating and air conditioning system if the house is under insulated or drafty.

Peter Collisson started his company, Affordable Energy out of Ballston Lake to help residences and small businesses tighten up, or vent out, their structures.

Collisson said he performs energy audits to find problems like mold and mildew, which are caused when a house is too tight, or drafts or other problems that result from poor insulation. Then he makes a recommendation to solve them.

"We do whole house diagnostics, from top to bottom, line by line," he said. "Mostly homeowners know when they're uncomfortable, but don't know why or where the problem is coming from. Things are hidden sometimes."

The trend in the building codes calls for making homes tighter and tighter, which can lead to moisture build-up and the consequential mold and mildew, he said. The problem is usually that the windows are too tight. The solution is often a heat recovery ventilation unit.

"The unit works through a heat exchanger to absorb some of the energy and filtrate the house," Collisson said. "All buildings need some air from the outside."

Collisson said strict construction codes require "everything to be air-sealed prior to insulating, so the house cannot 'breathe'."

The science of insulation has made it possible for homeowners to choose from a variety of types of insulation to improve on the home's ability to keep warm or cool according to the season.

There are four kinds of insulation materials and processes, from two-part spray foam to fiberglass to cellulose and injection foam. Each has it own unique properties and uses and costs, Collisson said.

One foam type is denser than another. Another type is for closed wall cavities and attics. Another injection type is used to increase the R-value of an already insulated wall.

"You can put cellulose foam in the attic, but there is a cost issue," he said. "It's less costly to use spray foam."

Many builders still use fiberglass insulation because it is the cheapest while meeting code. However, a house can't be made tighter with fiberglass, which is why some fiberglass companies are acquiring spray foam companies, he said.

Collisson said spray foams are a newer trend, "but still a chemical. Someone will develop something safer."

And if not applied properly, there may be a safety issue for the homeowner.

Older drafty homes can benefit from insulation around the sill plate and windows. Collisson's technicians regularly identify drafts in the hatch, plumbing chases and recessed lighting, and plug them up.

Moreover, today's high-energy appliances and hot water heaters use up an enormous amount of oxygen, he said, enhancing the need for ventilation.

"There are a lot of people in this industry now and it is good to have people doing energy audits," said Collisson. "But they can get in over their head with equipment costs and a lot of things can go wrong. It is a highly technical application."