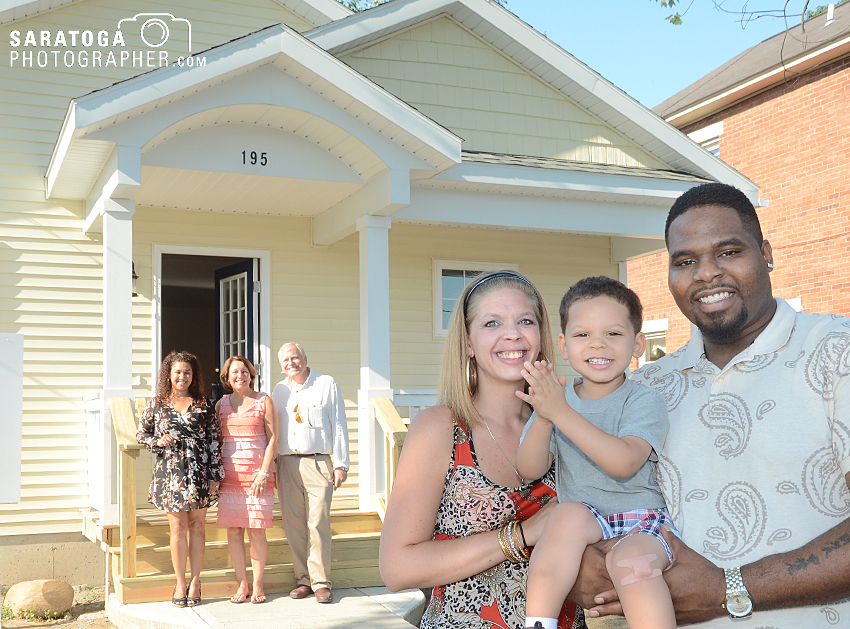 The Clements family of Saratoga Springs has occupied 195 Division St., a new construction carried out by Habitat for Humanity of Northern Saratoga, Warren and Washington counties.

Habitat for Humanity of Northern Saratoga, Warren and Washington counties is set to break ground on its second build of the year.

Officials said the build represents a “new period of growth for the affiliate,” as it sets a new record with the completion of two homes in one year.

Both homes are in Saratoga Springs. Officials said the Glens Falls area will be the location, yet unnamed, for a project in 2017.

“We’ve experienced an unprecedented amount of generosity this year, which has allowed us to expand our model to accommodate building multiple homes,” said Tammy DiCara, president of the local affiliate. “The people of Saratoga County have really come forward to address the affordable housing issue with some major donations of time, labor, materials, and land. It’s been a pleasure to see the community come together to support the advancement of our affiliate.”

The organization dedicated its 26th build, at 195 Division St. in Saratoga Springs, on Aug. 25 for the Clements family. The city of Saratoga Springs donated the property to Habitat for Humanity. Habitat partnered with the Saratoga Builders Association, Rebuilding Together Saratoga and community volunteers to build the home.

Earlier in August, the organization demolished a structure at 26 Cherry St. in Saratoga Springs for its 27th build.

Officials said that project is largely possible thanks to a $70,000 donation from Thrivent Builds with Habitat for Humanity.

Thrivent Builds, based in Appleton, Wisc., is a multi-year, multi-million dollar mission partnership between Thrivent Financial and Habitat for Humanity International. Excluding governmental funding, Thrivent Builds is Habitat's largest single source of funding, constructing and repairing more than 48,000 homes in the U.S. and around the world since 2005.

The new home at 26 Cherry St. will be a two-family townhome and is expected to be complete by the end of 2016, officials said.

"The relationship between Thrivent and Habitat is a tremendous blessing to our local Habitat affiliate," said Bill Bufkins, a financial associate with Thrivent Financial. "The financial support we are receiving comes at just the right time as we are making the move to serve multiple families each year and expand the good we do.

"The city of Saratoga Springs, Saratoga Builders Association and Rebuilding Together Saratoga deserve a lot of recognition as well. Without their help we would not be poised to turn what now stands at 26 Cherry St. into decent, affordable housing for two families this year."

Habitat builds and rehabilitates simple, decent homes in partnership with selected families. Houses are financed with affordable, no-interest loans and sold to partner families at no profit. The affiliate then reinvests the monthly mortgage payments, along with those from other families, to finance other houses.

More information on the organization is available at www.glensfallshabitat.org.