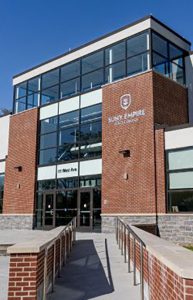 State University of New York Chancellor Jim Malatras has named SUNY Empire State College Executive Vice President for Administration and Chief Operating Officer Beth Berlin as officer-in-charge at SUNY Empire State following Malatras’ appointment as SUNY chancellor.
Working with senior leadership at SUNY Empire, Berlin will continue the work begun under President Malatras to reform and streamline the college’s operations to enhance the student experience, increase access to higher education for more students, raise the public profile of the college, and build a solid financial foundation for future growth, college officials said.The SUNY Empire College Council will begin planning a presidential search immediately.
Berlin brings extensive experience in education leadership, having served since 2013 as executive deputy commissioner of NYSED, before being named interim commissioner in 2019. She also previously served as acting commissioner in 2015. In that role, she managed the day-to-day operations of the Education Department, overseeing more than 700 school districts with 3.2 million students. She joined SUNY Empire in December 2019.
“Beth is an experienced educational leader who has immersed herself in the operations of SUNY Empire, a distributed college with 16,000 students and locations in every region of the state,” said Malatras. “She has my trust and the trust of the college community to continue to extend SUNY Empire’s unique, flexible, and adaptable model of higher education to more students around New York state and beyond. I look forward to working closely with her and SUNY Empire as we move the SUNY system forward.”
“The chapter always seeks a productive relationship with management,” said United University Professions Chapter President Pamela Malone. “We look forward to working with the administration and importantly, being involved in the upcoming search for a new president of one of the most important campuses in the SUNY system.”
“We’ve enjoyed a close working relationship with college administration and we look forward to continuing that as we work through this transition and the decisions we’ll face over the coming year,” said CSEA Local 641 President Debbi Staulters. “I know that we will continue to have a seat at the table to raise our concerns, be heard, and work toward productive solutions.”
“I look forward to working with our interim leadership team, building on the honest and open communication we’ve established as we carry this momentum forward and continue to serve our students and our mission,” said College Senate Chair Anastasia Pratt.