Wesley Health Care Center, a component of the Wesley Community, is the recipient of a $14,000 grant from the Arnold Cogswell Health Care Fund of the Community Foundation for the Greater Capital Region.

Wesley officials said the new equipment will assist the clinical care teams at Wesley Health Care Center in providing the highest quality of care to their residents.

“This new equipment is a wonderful addition to Wesley Health Care Center, and will further enable us to provide compassionate, quality care to our long-term residents,” said Brian Nealon, Wesley CEO. “We thank the Arnold Cogswell Health Care Fund of The Community Foundation for the Greater Capital Region for its contribution. It is an honor to be recognized by an organization which shares our commitment to enriching the lives of seniors.”

Audrey Mangini, owner of Bloom, A Movement Studio, offers a number of different classes at her 153 Regent St. studio to meet the needs of a diverse population.

Audrey Mangini, owner of Bloom, A Movement Studio, is someone who doesn’t like to be told “no.”

Mangini has been dancing since the age of two and she played soccer throughout her school career. When she suffered a knee injury requiring surgery at age 18, she was told that she would never be able to run again.

Within two months of the surgery, Mangini proved her doctors wrong. During that time, she also began taking Zumba classes to aid in her therapy and recuperation. She loved the classes and became an avid student.

When her father said, “You’re so good at this, why not just teach it yourself,” Mangini followed his advice and, within a few months, she became a certified Zumba instructor. But, she took her love of movement, dance, and fitness even further.

Bloom originally opened in 2005, under different ownership, at the Regent Street Arts Studio, 153 Regent St. in Saratoga Springs. The building has a long history as home to dance studios, and Mangini fondly remembered taking classes there as a young child. 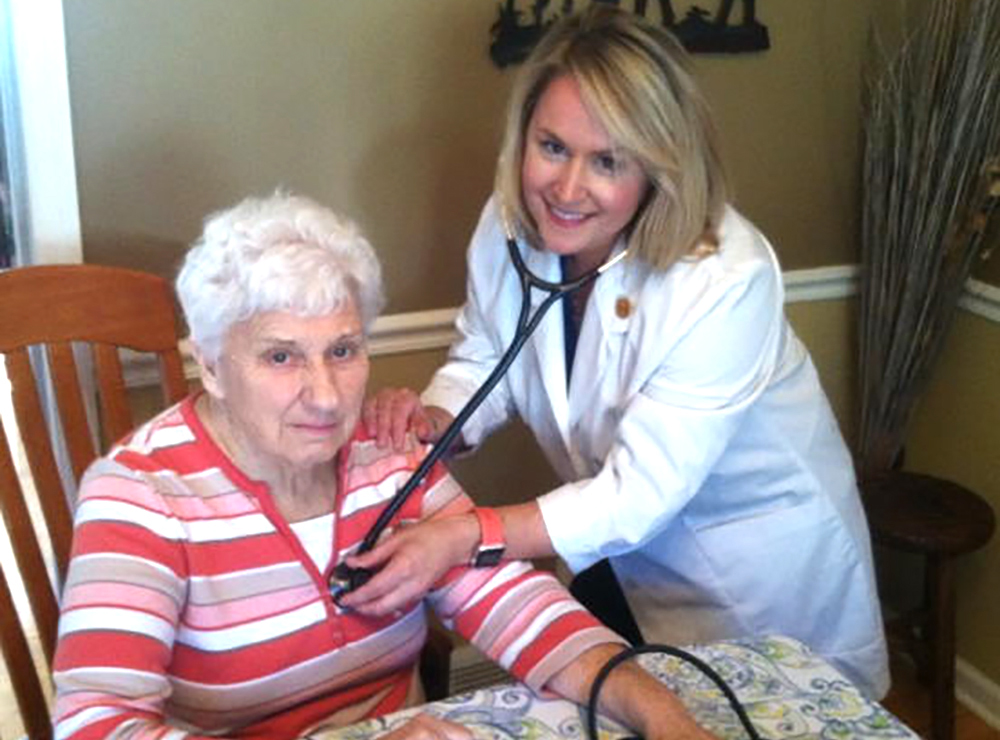 Nurse Practitioner Diana Miller examines Rose Capen in an effort to work with her and her family in evaluating her health care needs both in and outside of the home.Courtesy Capital Region NP Consulting

Diana Miller of Stillwater has always envisioned herself on the front lines, advocating for quality health care.

Since the passing of the state Modernization Act, permitting nurse practitioners to work independently, she has been able to turn her vision into a practice. She recently opened a practice that allows her to provide the care she feels so passionately about.

Capital Region NP Consulting in Family Health focuses on providing patient assessments for Medicare Advantage patients and in the comfort of their own home.

Miller said the focus area is to provide patient assessments for Medicare Advantage, in order to allow those 55-plus to age healthy in the home, with the objective to measure the appropriate care levels when there are requirements necessitating transition care management.

The state Modernization Act, having taken effect Jan. 1, 2015, is now resonating throughout New York State, with the greatest impact felt in rural areas like northern Saratoga and Warren counties. The legislation eliminated the requirement for experienced NPs to have a written practice agreement with physicians.

Rob Snell, financial advisor, Edward Jones Financial in Saratoga Springs BY ROB SNELL It probably doesn't show up on your calendar, but May is Disability Insurance Awareness Month. And you might agree that such a month is useful, when...

Ballston Spa National Bank is leasing space to Ellis Medicine in the BSNB Corporate Plaza at 990 Route 67, Ballston Spa. Ellis is leasing 2,904 square feet of office space and will open a primary care practice for patients...

The White House announced on April 1 that more than 7 million Americans have signed up for health plans under the Affordable Care Act. Congressional budget analysts had long forecast that 7 million people would get coverage this year...

The Stop the HIT Coalition, a broadbased group representing the nation's small business owners, their employees and the self-employed has raised concerns over how the new health insurance tax (HIT) will impact New york jobs following the release of...