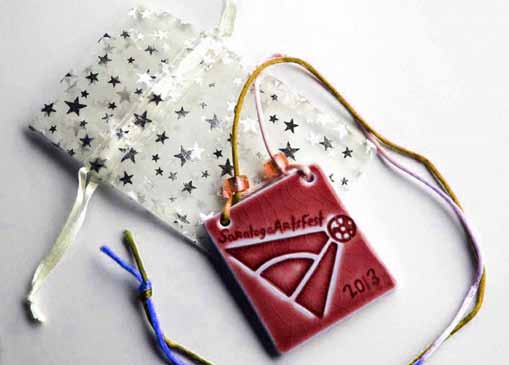 SaratogaArtsFest 2013 has awarded
grants to nine local arts organizations and
also announced a one-time promotional
price of $30 for ARTSPASS admission packages,
a $10 discount.

Planning is well under way for SaratogaArtsFest
2013, the seventh annual
citywide celebration of the arts scheduled
for June 6-9.
Each year, proceeds from SaratogaArts-
Fest’s fundraising event, Prelude, and a
portion of funds received from donors are
awarded to Arts Partners to help them SaratogaArtsFest 2013 has awarded
grants to nine local arts organizations and
also announced a one-time promotional
price of $30 for ARTSPASS admission packages,
a $10 discount.

Planning is well under way for SaratogaArtsFest 2013, the seventh annual citywide celebration of the arts scheduled for June 6-9. Each year, proceeds from SaratogaArts- Fest’s fundraising event, Prelude, and a portion of funds received from donors are awarded to Arts Partners to help them emphasize, once again, the value and richness of the arts in the Saratoga region.

This is reflected in the list of grantsupported performances: Albany Symphony Orchestra: The symphony’s Tiny Tots program will present Cowboy Dave, featuring the roughest, toughest cowboy conductor of all time leading children ages 2 through 8 on an action-packed, interactive musical trail-ride. Caffè Lena: Composer Elizabeth Woodbury- Kasius and Skidmore College theater students will collaborate in the creation of an original performance piece that evokes the last 150 years of Saratoga Springs history. Home Made Theater: Through a cabaret performance of songs and stories, eight thoroughbred “horses” will give sweet, funny, and endearing accounts of their lives in a “stable chat” titled Straight from the Horse’s Mouth.

Myers Dance Center/Northeast Ballet: The troupe will present a dance performance exploring the training and similarities between dancers and horses, and the athletic and emotional demands on humans and animals in their respective art forms. Opera Saratoga: In Opera 150, Opera Saratoga general director Curt Tucker will lead an informative talk about how opera has evolved over the past 150 years, with examples performed by members of the Opera Saratoga 2013 Young Artist Program. Saratoga Arts: In Gary Lucas and the Golem, musician Gary Lucas will perform to the 1920 expressionist film The Golem, the tale of a rabbi who made a man out of clay to save the Jewish community of Prague.

Lucas will also perform shorter pieces to recent film clips, followed by a discussion. Saratoga Chamber Players: 150 Years of Music and Art in Saratoga–a chamber concert with bassoon, violins, viola, and cello–will highlight works that audiences heard 150 years ago, as well as pieces composed by the principal bassoonist of the Philadelphia Orchestra, who performed at Saratoga Performing Arts Center. The concert will be accompanied by slides of 150 years of art in Saratoga.

Saratoga Children’s Theatre: The theater troupe will present various children’s performances at the Beekman Street Arts Fair. Program offerings will include an open-mic segment, various theater skits, and youth Elvis impersonators. Saratoga Film Forum: Yaddo, the venerable artists’ community in Saratoga Springs, has nurtured over 70 filmmakers. The Saratoga Film Forum celebrates Yaddo’s commitment to the art of filmmaking with three nights of Yaddo filmmakers showing their works and discussing them. Just in time for holiday shopping, SaratogaArtsFest is offering the one-time promotional price for an ARTSPASS admission package of $30.

An ARTSPASS provides admission to most festival events and discounted admission to the others. The ARTSPASS also provides discounts at Saratoga Springs restaurants and shops during the festival, as well as discounts throughout the year at area arts organizations. To purchase an ARTSPASS at the onetime price of $30, go to www.SaratogaArts- Fest.org, or to any participating local retail location. The special pricing is good through Dec. 31.

Passes may be purchased at three Saratoga Springs stores: Impressions of Saratoga and Mimosa Gallery, both on Broadway, and Saratoga Beads, on Henry Street. The passes will also be available at the Skidmore Shop on the Skidmore College campus. Advance ARTSPASS purchases at these locations may be made with cash or check only.

More information about the festival, including volunteer and sponsorship opportunities, is available at www.SaratogaArtsFest.org.