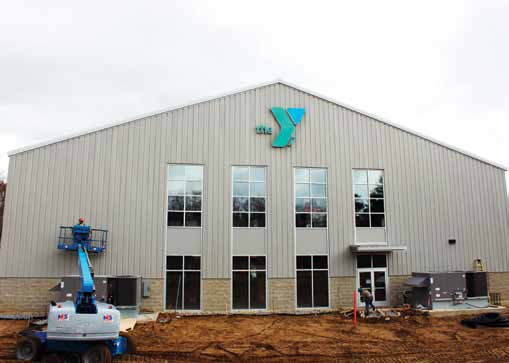 Saratoga Regional YMCA continues to
grow, this time with the expansion of its
Wilton branch.
Dec. 1 was the grand opening of the
enlarged Wilton YMCA facility, now one
of the largest YMCA’s in New York state.
The 35,000-square-foot addition includes a
gymnastics center, a studio for “warm yoga,”
new locker rooms, and expanded child care
facilities.
Also added were 187 additional parking
spaces.

The Wilton Y, at 20 Old Gick Road, opened in 1984 when the Saratoga Regional YMCA purchased a defunct indoor tennis facility. The original facility consisted of six tennis courts. Phase I of the building program converted two of those tennis courts to facilities for gymnastics, basketball and “all sorts of different things,” according to Jim Letts, Saratoga Regional YMCA CEO. Few YMCA facilities include tennis courts but, Letts said, “in this community, tennis works.”

The clientele includes a large number of tennis players and golfers. The first phase was financed largely by a $1 million donation from Skidmore College, a large donation from the Wright Foundation in Schenectady, and money raised by the tennis players. “The YMCAs are built with donors’ dollars,” Letts noted, “Membership won’t carry it.” In particular, “million dollar donations are very key in getting you to your goal.” Phase I was also fi nanced, in part, by a mortgage. That was paid off before Phase II began. As a matter of policy, “before we begin a new project, we pay off the old one,” he said. Phase II also has its major donors, including a $1 million gift from Bill and Susan Dake and Philly Dake.

The organization incurred a $1.3 million mortgage as well. The new two-story building includes facilities for spinning (stationary bicycles) basketball, fi tness classes (some attracting as many as 50 students), and massage as well as the yoga, childcare, locker rooms and gymnastics facilities. At some 100,000 square feet, it is now one of the largest in New York State. Wilton is one of the few YMCA’s to offer gymnastics. While primarily for children and youth, adults are also taking gymnastics classes at Wilton.

“It’s a different kind of workout,” Letts said, and he sees it as “an avenue for growth” for the YMCA. The 8,000-square-foot facility will be used exclusively for gymnastics. The Glens Falls YMCA also offers gymnastics. For “warm yoga,” the studio is maintained at 88 degrees, not as high a temperature as a facility for “hot yoga” but warmer than the usual yoga studio.

Once Phase II has been paid for, a third, and fi nal, phase will include renovation of the original building. Letts expects the expanded facility to attract new members and he also expects 5-6,000 members to move to Wilton from the overcrowded Saratoga Springs facility. He has been CEO of the Saratoga Regional YMCA for almost 10 years. The region comprises the Saratoga Springs and Wilton YMCA’s and satellite facilities in Malta, Greenwich, and Corinth. For the region as a whole, Letts said, “growth has been very healthy.”

He is watching now to see where employees coming to work at GlobalFoundries in Malta decide to live. The expected infl ux of workers and their families provide potential growth opportunities. “Eventually, we will build a YMCA when we see where they will live,” Letts said. The phone number for the Wilton YMCA is 583-9622.