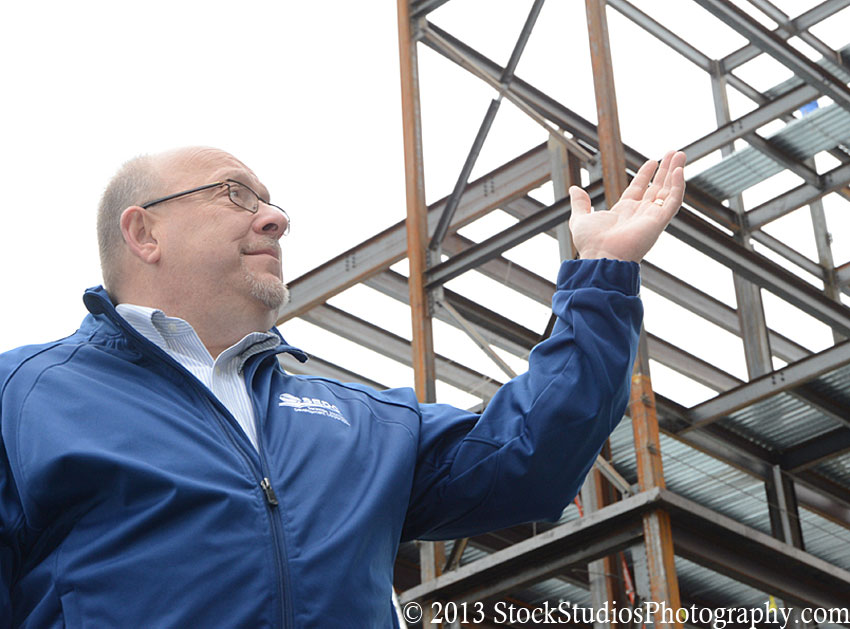 Looking at recent growth in commercial
real estate development in Saratoga County,
Jim Angus, vice president of the Saratoga
County Economic Development Corp.,
wants even more.
It’s been our opinion for a long time that
there is not enough,” he said.

He sees a particular need for “flex-space”
buildings that can be adapted for offices,
warehouse space or assembly space. When
such a building is completed, it fills up fast,
he noted, pointing out that a 40,000-squarefoot
commercial building in Clifton Park
was completely leased before it was even
announced.
Much of this development comes in response to the GlobalFoundries computer chip factory in Malta, he admitted.

“I don’t think we have begun to see the full impact of that development,” said Angus.

He pointed out that the so-called Fab 8.1 plant “has only had approximately $2 billion of its tools installed, of approximately $6 billion.” So far, that machinery has been serviced by its manufacturers but, typically, when the relatively short warranties expire, other companies take on the job of servicing the equipment. Some of them are already in the area. Others will be needed. So will building space.

“There will be a real quick ramp-up in suppliers,” he predicted.

“Saratoga County, like many other communities, went through a very bad spell,” Sleasman said. “The good news is that it has recovered very nicely. Much of that is a normal market recovery process in a marketplace that was healthy to begin with.”

He sees the influence of the Global- Foundries development primarily on the adjacent Saratoga Technology and energy Park. That park is owned by New york State energy Research and Development Agency (NySeRDA) and has been developed by Jersson Brothers, who own the building. Approximately, half the space in that park is occupied by GlobalFoundries. The rest- -some 20,000 square feet of office space and 43,000 square feet of “high base space” (think warehouse or manufacturing space)- -is still available. In other words, the very type of flex space that Angus sees a need for is waiting for tenants.

“The expectation of a quick in-fill by GlobalFoundries has not been met yet,” he said. For now, he feels, the GlobalFoundries development is “important but not significant” to the local commercial real estate market.

Lindberg said users want the space but they are not ready to commit to long-term leases. Some companies have leased for two or three years, finished their work, and left. For now, she says, “they have to take what we have” to offer. Once they decide they want to stay, developers will build.

At the moment, she said, there are several hundred thousand square feet of commercial space on the market. It is receiving a “mixed reaction.” Some fills up quickly; some buildings are “still waiting for their first tenant,” Lindberg said.

GlobalFoundries was a “cash transaction” undertaken in the midst of a deep recession, Angus noted. Smaller developers hoping to feed off that factory complex have to find financing, which can still be difficult. Sleasman pointed to financing as one of two factors limiting commercial development. The other is insufficient demand. “The demand is not enough to get excited about,” he said.

While the eDC is not involved in retail development–stores, restaurants, etc.– Angus is sure “there will be a need” and has seen that new restaurants, bars and stores are “very busy.”

People coming to work at GlobalFoundries have chosen to live “all over,” he said, including Malta, Clifton Park, Saratoga Springs, communities outside Saratoga County.

Angus said the growing commercial development is “definitely a good thing.” “We need to see new businesses invest and existing businesses re-invest in order to keep an area strong,” he observed, “Without continuing investment, an area dies.” From the point of view of the community- -and its tax base–“you need the commercial development that does not have a school bus stop out in front,” Angus said, referring to buildings away from residential areas.

He said owners of commercial property pay taxes to help support the services the rest of the community needs. Manufacturers are particularly beneficial, he feels, because their investment tends to be larger and longer term.

On the other hand, all the commercial development requires improved and increased infrastructure. Angus sees “two challenges” facing commercial developers in Saratoga County and the Capital region in general: electricity and gas.

“There is not as much power available as we would like,” he laments. “It all seems to go around the [Adirondack] Park rather than through it,” he noted. Consequently, “There is just not enough here.” Lindberg agreed that utilities, especially water and electricity, are issues. Demand for both will increase exponentially with additional building. On the other hand, she said, the highway system has been overdeveloped for a long time. In time, there may be a need for better access, perhaps another Northway exit, but nothing major.

Despite their caution, Sleasman and Lindberg describe themselves as “absolutely upbeat.”

“This is a great time to be in business up here,” Sleasman said. Lindberg noted that “these towns have protected themselves pretty well” in terms of preserving greenspace and open space in the face of rapid development.