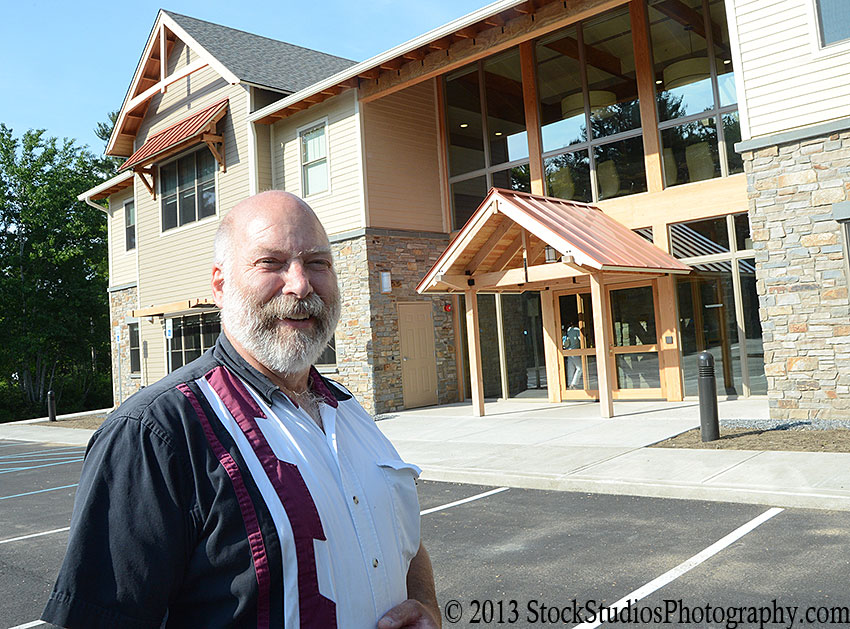 Don McPherson, associate principal at
The L.A. Group, a landscape architecture
and engineering firm in Saratoga Springs,
acknowledges there is a greater awareness
among people these days of “green”
— environmentally and ecologically friendly
— design and construction practices.

Green processes are being used more and
more by builders a a result of this awareness
by not only customers, but within the
industry itself.

McPherson, a mechanical engineer, holds the designation of being a LEED-accredited professional. LEED is the acronym for Leadership in Energy and Environmental Design, a certification point system for sustainable, energy-efficient, earth-friendly construction projects developed by the U.S. Green Building Council.

A project for which LEED certification will be pursued needs to have explored from the outset exactly what that certification would entail in terms of design, additional engineering studies, building placement and orientation, materials (down to the kinds of paint and carpets that will be used), and additional time and administrative costs, including the fees of more experienced highly trained professionals, he said.

In effect, said McPherson, “every facet of design” for the entire project needs to be considered in advance. LEED accreditation and its silver and gold levels have become the benchmarks for green building.

But McPherson said it is “in the owner’s court” to decide what they can afford and the level of certified greenness, however admirable a gold-level LEED certification might be.

HRCCU chose not to pursue certification, but there were a number of green processes used, including a geothermal heating and cooling system.

Project architect Scott Townsend of 3t Architects in Albany said geothermal systems use deep wells to take advantage of the earth’s constant temperature of around 50 degrees Fahrenheit below the frost line, using air at that constant temperature to provide “a head start” for heating and cooling a building.

Additional energy efficient aspects of the project include a skylight that sends daylight into an atrium and adjacent office spaces and high R-factor windows around the perimeter of the building, designed to let in lots of light while avoiding energy loss from heating or cooling.

Townsend said spray foam insulation used in the building is at least 30 percent more efficient than building code requires. Radiant heat in the floors in the atrium permeates the building’s common areas. Sustainable cork flooring is seen in the common areas. Care was taken to include native species in the landscaping plantings.

Frank Alessandrini, principal of construction company F.H. Alexander Inc., was the builder for the Corinth project, and also for an HRCCU office in Troy a couple years ago that got LEED certification. He and McPherson passed along information regarding some of the stipulations for LEEDS certified projects.

In order to ensure that wood materials used in a project meet optimal sustainability criteria, the Green Building Council has established a chain of custody system from harvesting site to building installation.

Documentation must be signed as the materials are passed along from loggers to shippers to retail sources and any other stops along the way until the material has actually been installed in the project. If any gaps exist in this chain of custody, however, the points toward certification that would have been earned are forfeited.

For example, LEED-certifiable lumber from forest owners with the Forestry Stewardship Council may be found in some big box home centers and lumberyards, but, said Alessandrini, if the store is not a participant in the council’s chain of custody for that product, the lumber’s use does not contribute toward LEED points.

Chain of custody documentation for an order of lumber would indicate such factors as sustainable harvesting practices (no clearcutting of forests), distance the lumber has had to travel to the building site (a partial indication of the carbon footprint entailed in the transportation of the order) and respectful treatment of indigenous people in the area where the wood was harvested.

Alessandrini said situations have arisen where chain of custody documentation was not available on a needed size of building trusses for a project. Thus, chain-of-custody certified lumber had to be delivered to the truss manufacturer so that the trusses could be created in a manner to have LEED points eligibility. Not all wood used in a LEEDS certified project has to come through chain of custody, but the more of that wood there is in a project, the more points the project earns toward certification.

According to the LEEDs program, points are earned for such factors as interior air quality (ensured in part by duct work sections being delivered to the building site with both ends sealed until the moment of installation), how the placement and construction of the building take advantage of natural lighting, and energy efficiency with regard to heating and cooling systems. LEED certification may be awarded in a variety of categories including renovations, core and shell (just the windows, roof and insulation of a project), neighborhood development (ensuring that a project upon completion will encourage people who inhabit or frequent the site to access such green transportation amenities as bike racks and access to public transportation) and college campuses or single college buildings. Innovation is another factor that can earn a projects LEEDS points.

Low-impact site design is a factor as well, said McPherson, with a sensitivity observed toward wetlands and water runoff from slopes on site and adjacent areas. The American Society of Landscape Architects has, according to McPherson, just completed its own pilot certification program just for landscaping projects.

Completed LEED building projects undergo a commissioning period for several weeks once they are in use to provide some extra monitoring on the functionality of the building, particularly in terms of heating, cooling and water systems. Follow-up studies to monitor the long-term functionality of buildings.

The operations center was built to house operational staff that was working in three separate office locations and to accommodate future growth. The building houses 39 employees.

“We are so pleased to have finally completed this significant undertaking for our credit union,” said HRCCU Chief Executive Officer Sue Commanda. “The completion of this building and the consolidation of our staff will increase our operational efficiency and further position our credit union for future growth.”

A community open house is being planned for later this year.