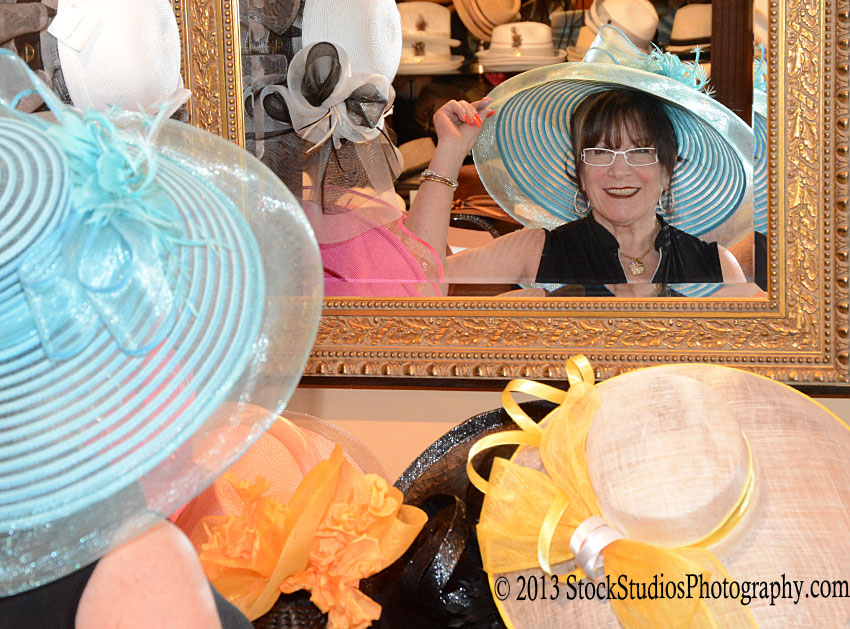 Joyce Locks, owner of Hatsational, is already making hats for the upcoming Saratoga Race Course season, but can design hats for any outfit or any type of event

“Bring in your dress and we will complete
your outfit for you,” offers Joyce
Locks, owner of Hatsational, a new shop in
Saratoga Springs. “We will finish your look.”

When it comes to hats, “We have everything
except baseball hats” for women,
men and children, she said, and in all price
ranges. There are fancy hats, everyday hats,
straw hats, boaters, pork pies, panamas,
dress hats in Shantung silk, and more.

“I believe a store should have something
for everyone,” she said. Prices range from
$40 to one-of-a-kind hand-sewn hats at
$1,000 or more. People visiting for the first
time “are in awe of the amount of selection,”
she said.

In addition to hats, Hatsational sells purses, sunglasses, belts, jewelry and other accessories. Everything, she said, to get you “derby ready” (or, presumably, ready for the Travers). She recently outfitted a Massachusetts woman for a visit to Royal Ascot, she said, and some of her hats appeared at the Kentucky Derby.

Since the shop opened in March, business has been good, Locks noted.

“We’re selling a lot of everything,” she said. Dress hats for the track have been big sellers recently. So have panama hats for men and women. For people looking for a sun hat, there are more than 20 styles to choose from.

Locks, who also owns race horses, got the idea for the shop when she was at the Gulfstream track in Florida on a “seriously bad hair day” and could not find a hat. She began with a home-based business, selling hats at shows and parties, some of them at the Saratoga and Belmont racetracks.

The business kept expanding until “the house was full of hats,” she recalled. At about that time, she realized that there was no hat store in Saratoga Springs.

This is not her first business venture. Locks has been in the interior design business since 2000, as well as the horse business, and has had other businesses as well over the years.

She spent several months stocking the 18-feet by 70-feet showroom at 510 Broadway, near the Saratoga City Center. There are now four part-time employees working with Locks and she is “starting to groom additional employees for the (horse racing) season.”