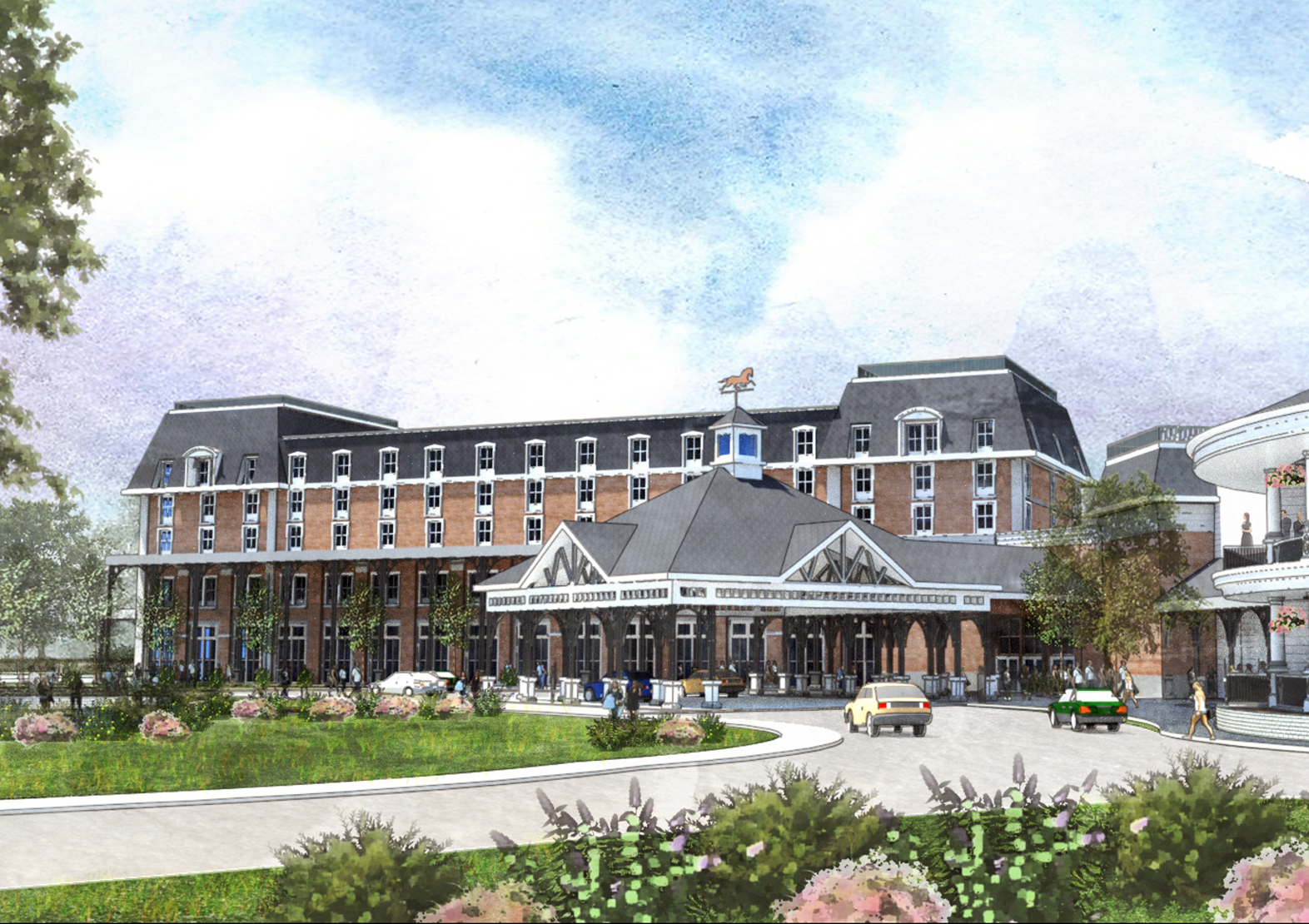 This architect rendering of the completed $30 million Saratoga Casino and Raceway expansion shows the new hotel that will be part of the project, expected to open in 2015

Saratoga Casino and Raceway have plans to
expand that will give the facility a new look and
feel, including a hotel where guests can stay and
a swimming pool.

As it approaches its 10th year of operation,
officials made the announcement on May 28. The
$30 million project includes a 120-room hotel
with guest spa, indoor pool and lobby bar, a 24,000
square-foot, multi-purpose event center, and a
signature fine dining restaurant.

Officials said the plans are the most significant
expansion ever done at Saratoga Casino and Raceway
and represent the transformation of the facility
into an international resort destination.

Officials said Saratoga Casino and Raceway employs over 600 team members and had payroll expenditures over $18 million in 2012. The expansion plans include the creation of 260 additional jobs at the facility, and an additional $9 million in annual payroll expenses, bringing the total number of employees to 900 and yearly payroll expenses to $27 million.

The property underwent a $15 million renovation and expansion prior to opening in January 2004. In 2007, $25 million was spent to add 400 slot machines and electronic table games, Vapor Night Club and the Garden Buffet.

Officials around the state, including Saratoga County, have been awaiting word from Gov. Andrew Cuomo about the possibility of a state constitutional amendment getting on the ballot this November that would open the door to having as many as eight large casinos built around the state. The locations would be determined by the Legislature.

But this expansion project is not related to that. “The expansion plans unveiled will take place regardless of what happens with the proposed constitutional amendment,” a spokesperson said.

Owners unveiled architectural renderings of the project, a construction timeline and an economic impact study demonstrating the significance of the project to Saratoga Springs, Saratoga County and New York state.

“Since opening in 2004, we have seen tremendous growth and are very proud to have generated in excess of $111.3 million for our horsemen and $601.2 million for education in New York state,” said Jamie Hartman, executive vice president and chief operating officer of Saratoga Casino and Raceway.

“Our proven track record of growth, job creation and revenue generation for all our stakeholders is one we look forward to improving upon with this plan.”

Saratoga Casino and Raceway has welcomed more than 19.2 million guests since its 2004 opening, including 2.2 million in 2012 alone, according to casino officials.

“We are looking forward to bringing these new entertainment and hospitality amenities to our guests. From the beginning, we have worked closely with our local leaders to drive increased tourism to our community and are excited to be able to use these plans to bring more focus to Saratoga as an international resort destination,” said Rita Cox, senior vice president of marketing. “With these plans, we will be expanding our marketing efforts to attract visitors from areas outside the Capital District and throughout the entire Northeastern Region.”

The construction timeline anticipates work beginning in spring 2014 and the opening of the expansion project in spring 2015.

“We look forward to undertaking this plan and are pleased to be able to move forward,” said Hartman. “We are also excited to create more than 300 union construction jobs and $21 million in payroll to the Capital District when jobs are so sorely needed by all upstate communities.”

Todd Shimkus, president of the Saratoga County Chamber of Commerce, said the expansion “is yet another example of how Saratoga County is leading the way encouraging private sector investment and job creation across a wide range of key economic sectors. This project will be great for local construction workers and when completed will create more than 260 new full and part-time jobs of benefit to our local residents and our local economy.”

He added that the casino “helped to revitalize the local harness racing industry and they provide essential support our area’s agricultural sector too. They’ve been outstanding partners with the Chamber and others to promote and market Saratoga as well as generous contributors of their time, expertise, leadership and money to many local charitable organizations.”

The $30 million expansion is estimated to generate more than $53.4 million in New York’s statewide economic output and $1.75 million in state and local tax revenues.

In the first full year after the expansion project is completed, Saratoga Casino and Raceway’s operations will generate an ongoing increase of $1.7 million in support for New York’s racing and breeding industries as well as an increase of $10.1 million in New York state’s share of the revenues and $1.75 million in state and local tax revenues, officials predicted.

A total of 405 additional jobs and $19.2 million in wages and salaries will also be created, officials said.

“The $1.2 billion in revenues already generated by Saratoga Casino and Raceway should be considered to be the beginning of what can be accomplished by this world class team,” said Hartman. “We believe that we’re at the beginning of a transformation that will ensure significant long term economic benefit for New York state and our horsemen as well as for our community and our employees.”

“As the Saratoga County economy continues to expand, so do its venerable entertainment institutions,” said Chamber of Southern Saratoga County President/CEO Pete Bardunias. “This is another example of why so many people choose our region as their place to live, work, and play.”