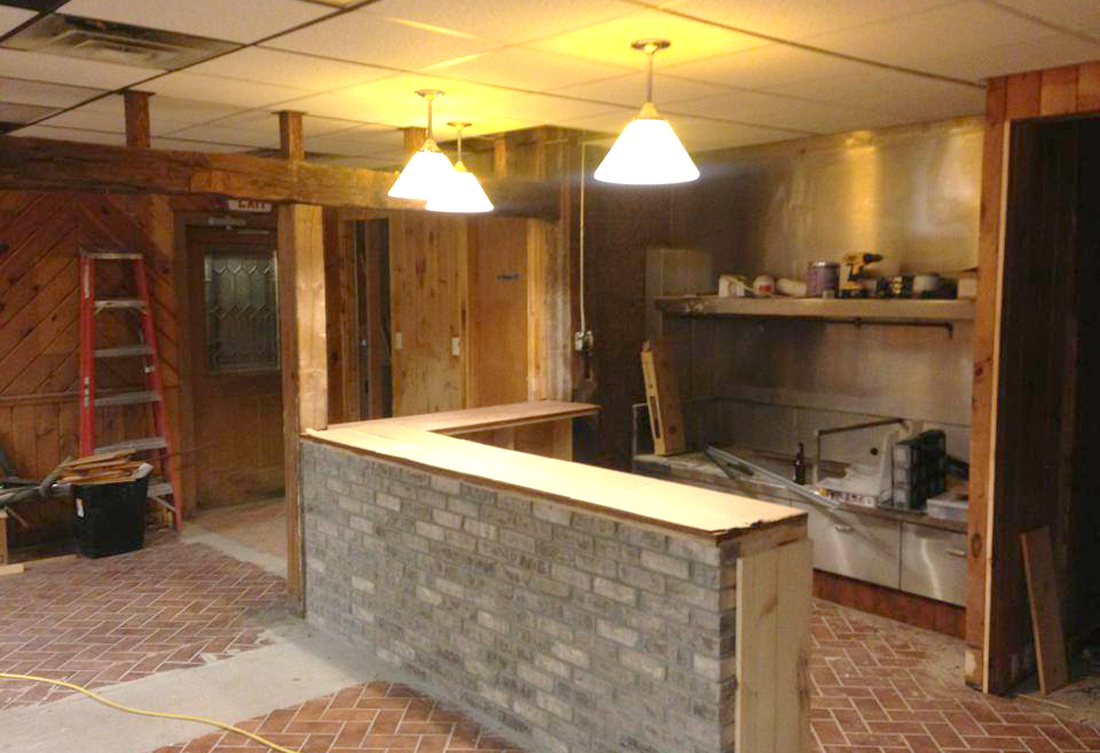 The building that was once Mario’s Ice Cream parlor on Route 50, a portion of the interior shown here, is being renovated into a distillery that will make whiskey, vodka and gin.

Mid-2014 will see the arrival of a new micro-distillery in Ballston Spa.

The High Rock Distillery is the concoction of Jacob Hewson, whose family has had a farm in Hoosick Falls since 1908, first in dairy, but now growing corn to help meet its tax burden, and Peter Hatalyk Jr. whose family owns a non-working farm in Stillwater, but who grew up working on farms. Their distillery will produce whiskey, gin and vodka.

Hewson and Hatalyk will occupy 2,800 square feet of property of space that was once Mario’s Ice Cream parlor (more recently known as Christy’s Cones) on Route 50. They also purchased the neighboring vacant property.

It is named after the historic High Rock Spring in Saratoga Springs.

“We believe the whole purpose of our craft distillery is to create products with local ingredients,” said Hatalyk. “We want it to be a taste of Saratoga. A large part of that taste has everything to do with the great water we have here and that we’ll use in the process. High Rock Spring happens to be very large part of the area’s history.”

The idea of a distillery grew from the frustrations of trying to find creative ways to utilize their respective family farms, to help pay what they describe as debilitating taxes on farmers. Settling first on the idea of growing hops to pay land taxes, the idea of the distillery project was born.

“New York has been really hard on farmers with property, material, and equipment tax, to name a few. The few grain farms left in New York are trying to make the most money off of the grain they grow, which happens to be corn at the moment,” said Hatalyk. “For farmers to invest operating capital in grains that have less return, makes no sense for them. And that puts a strain on the New York’s distilleries.”

The partners have been in preliminary discussion with Grand View Fence and Farm from West Hoosick to purchase grains they need.

They hope for a late May or early June grand opening.

Hewson and Hatalyk both have backgrounds in construction, and combined with help from friends and family, are undertaking 85 percent of the work themselves, they said. A new roof was a priority and that was completed by Hopek Roofing from Mechanicville. The job of painting of the property is in the hands of Fresh Start Painting Services from the Hoosick Falls area.

Discussions are ongoing with a few different manufacturers for the larger stills, and they partners have also spoken with a few, local copper and stainless steel fabricators in regard to designing smaller batch stills. Black Swan Cooperage, a family-run business in northern Minnesota, will provide the barrels.

“At High Rock, we feel producing small batches gives us the ability to continually make different products, for example, wheat, or rye, barley or multiple grain whiskeys,” said Hatalyk. “We’d like to try making some smoked whiskeys. We want to run some small batches of potato or corn, or multi-grain vodka and gin. Our whole approach is to test small batches and to bring the community in for each batch testing.

“Each small batch would yield 50 to 75 bottles. We would have a tasting party every month to see what people think. If it’s a winner, we run the mash on the big stills for large production runs. We’ll keep our staple whiskeys, vodkas, and gin readily available, but we just don’t want to stick with three products. We want everyone to be waiting for the next batch of whatever goodies we are making for the week. That is what we think a craft distillery is and that is what High Rock is all about.”

Selling and distribution of their yield will happen on premises for the first couple of years, as permitted by their distilling license. Thought has already been a given to forging alliances with other local business, such as joining forces with Amerivape, the cigar shop in Ballston Spa, to host events for whiskey and cigar enthusiasts. The two are also considering opening their facility for local charity events, as well as hosting smaller events on their vacant property.

High Rock Distillery, currently being renovated, is located on Route 50, at 1321 Saratoga Road. More information can be obtained at 369-6132, and updates, latest news and photos of ongoing progress can be found on Facebook.