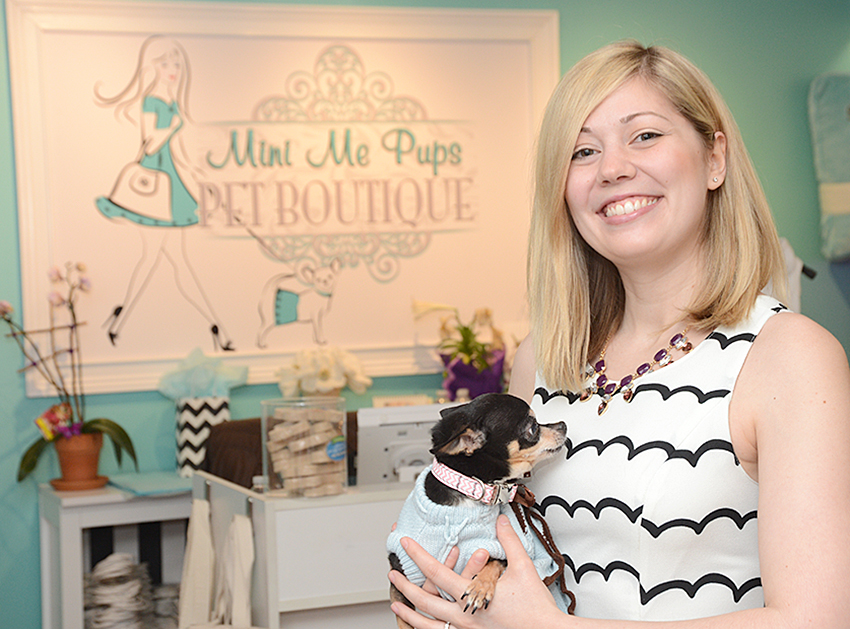 ©StockStudiosPhotography.com Jill Rodriguez, proprietor of Mini-Me Pups Pet Boutique in Saratoga Springs, calls her shop “a lifestyle boutique for people and their pets.”

Mini-Me Pups Pet Boutique, located on
the lower level of the Downstreet Marketplace
at 454 Broadway, in Saratoga Springs,
is “a fashion fusion of moderately priced
apparel, bags, accessories and treats for
pets and their people,” according to owner
Jill Rodriguez.

The boutique had a soft opening in
early April and a grand opening on April
26. “Mini-Me” does not refer solely to small
dogs, said Rodriguez, but rather to the notion
that people and their pets are said to
resemble each other.

Rodriguez has a background in fashion
and retail. She was educated at New York’s
Fashion Institute of Technology in both
fashion merchandising and in pet products
design and merchandising.

She worked previously at Bed, Bath & Beyond’s corporate headquarters in New York, but moved to the Saratoga area when her husband’s employer moved him upstate.

Rodriguez spent two years working in a veterinary clinic while trying to figure out employment more in line with her training. She decided to establish “A lifestyle boutique for people and their pets.”

The shop features collars, clothes, beds and fancy treats for dogs. Owners can get shirts to match their critter’s clothing or with a picture of their dog’s breed on it. They can also purchase candles and aromatherapy oils that are not irritating to their pets.

She said buddy belts have been popular items. They are harnesses constructed so as to not strain dogs’ necks when they are being walked. A variant is a hidden harness, which combines a jacket, harness and leash all in one item at what Rodriguez says is a good price point.

Bakery treats for dogs include doggie cheesecake and treats shaped like mustaches. Mini-Me sells a fetch stick that combines features of a stick and a tennis ball. They sell particularly durable rope toys.

The shop sells a line of collars from Harry Barker, said to stand up to pooches who have tended, up to now, to need frequent collar replacements. Dogs of larger breeds who may not appreciate the notion of wearing clothes can still be decked out with bow ties for the males’ collars and flowers for the females.

Rodriguez enjoys sharing her designs with customers. She’s happy to share information from her time working in a veterinarian’s office that may be beneficial to pets and their owners. She enjoys researching new fashions for her two- and four-footed customers. (Dogs are allowed not only in Mini-Me, but in the rest of Downstreet Marketplace as well).

Rodriguez has also introduced the Italian line of I Love My Dog merchandise to Saratoga.

Rodriguez has four dogs of her own that are testers for products in the store. She is very excited that Mini-Me has been invited to participate in local fundraisers, including the Cocktails and Couture event at Prime at the Saratoga National Golf Course for the Juvenile Diabetes Research Foundation, the HOPE Walk for Homes for Orphaned Pets Exist, and the upcoming fundraiser at Javier’s for SPCA of Queensbury.

Mini-Me’s website address is www.minimepups.com. They can also be found on Facebook, Twitter, and Instagram. The shop’s phone number is 306-1121. The shop is open 11 a.m. to 6 p.m. Sunday through Wednesday; and 11 a.m. to 7 p.m. Thursday through Saturday.