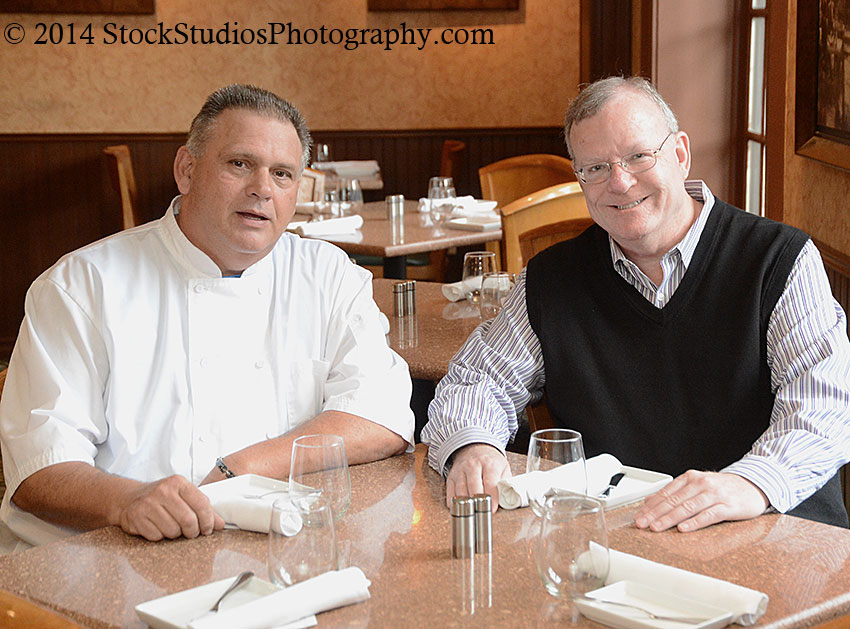 Bill Donovan, right, owner of Maestro’s at the Van Dam, and executive chef Danny Petrosino sit in the Saratoga Springs restaurant that is opening a new room on the second floor

When Maestro’s at the Van Dam restaurant
reopens on Oct. 23, it will feature some
additions to its menu, with input provided
by a new chef.

The downtown Saratoga restaurant will
also be expanding — upward — with a new
banquet facility being built on the second
floor. Bill Donovan, owner of the popular
353 Broadway establishment, said the new
room will seat up to 120 people and should
be completed in November, in time for use
when the restaurant puts together special
Thanksgiving Day dining plans.

The restaurant was set to close Oct.
11. When it opens again, new chef Danny
Petrosino will unveil a menu that keeps
many of the great dishes customers have
enjoyed in recent years, but with additions
he hopes people will grow to love,
Donovan said.

Petrosino replaces John LaPosta who
was a part-owner and head chef at Maestro’s,
but who has moved on to pursue
other opportunities.

Petrosino was owner of Mia Posto restaurant
in Saratoga Springs but sold it prior to
his move to Maestro’s. He was once executive
chef at the Glen Sanders Mansion in
Scotia and food and beverage manager at
Saratoga National Golf Club.

“There’s been a lot of concern about
changes at Maestro’s,” said Donovan.
“But it’s not our intention to redesign the
restaurant. It’s been a success, to a large
degree because of the menu. So the core
menu, that’s not changing.”

He said the menu will have some Mediterranean
dishes and perhaps some with
Asian influences. “As opposed to being just
an American bistro, we’ll be more of an
international bistro,” Donovan noted. But
the basic menu of the past “won’t see very significant change.”

Also during the brief hiatus, Maestro’s
will get some fresh wallpaper and carpeting
in the restaurant and bar/lounge areas,
as well as some new furniture, the owner
said.

The second-floor events room will be
called the Empire Room, said Donovan. It
can be rented for weddings, business luncheons
and dinners and “a whole plethora
of entertainment activities.”

Bruce Levinsky of Merlin Development
in Saratoga Springs, an owner of the 179
year old building that was once the Van
Dam Hotel, has announced plans to build
upward and make it a six-story luxury hotel
with some 176 rooms.

Donovan, who is leasing the extra
second-floor space from Levinsky, said if
the hotel plans move forward, it would be
from the third floor upward, and not effect
the expansion of Maestro’s.
“Bruce has been very supportive of our
efforts in the building,” said Donovan.

Donovan is also part owner of Harvey’s
Restaurant and Bar located nearby on
Phila Street, Saratoga Springs. He said
Petrosino has also been working with
staff at Harvey’s to develop some new and
interesting menu items.

When Maestro’s reopens, he noted, there
will be an expansion of the “be my guest”
rewards program for people who are repeat
customers. Points earned for those programs
at either restaurant will be able to
be interchangeable between the two sites.
“We’re pretty excited about that,” Donovan
said.

Maestro’s also has a new logo, and
website, that will be unveiled upon the
reopening on Oct. 23.