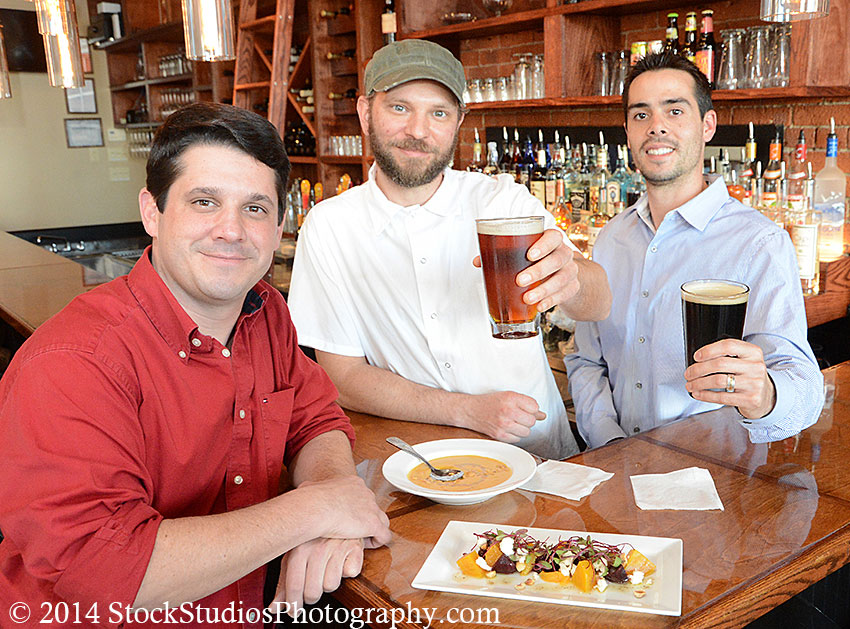 Chef Jeff Strom stands between the co-owners of the Next Door Kitchen & Bar in Ballston Spa, Chris Fignar, left, and Matt Hall. The duo also owns the Front Street Deli

A pair of delicatessen owners have opened
a second business, this one a restaurant in
Ballston Spa.

Matt Hall and Chris Fignar have owned
Front Street Deli, 39 Front St., Ballston Spa,
since 2005. Prior to that, both of them had
worked in many dining establishments. When
the restaurant two doors down from the deli
recently became available, they seized on the
opportunity to open the space as a dining establishment
with a neighborhood feel.

The Next Door Kitchen & Bar, 51 Front St.,
opened in October. Chef Jeff Strom showcases
locally and organically produced foods.
Strom has over 15 years of cooking in restaurants
in the Denver area.

The restaurant décor includes barn boards
reclaimed from local area barns. It features
table seating for 38, with room for another 13
at the bar. The works of a local glassblower and
copper craftsman are on display. The carpentry
work was done by local carpenters.

The “next door” and local themes carry over
into the menu. Much of the produce comes
from the owners’ Next Door Garden, located
on Science Street in Ballston Spa. Other area
farms whose products are sold at Next Door
Restaurant & Bar are in Schuylerville, Salem,
Schaghticoke, Galway, and Newport, N.Y., along with a cheesemaker from Cohoes.

The draft beer selection is strictly New York
state-sourced. Spirits are from local distilleries
when possible, including one located in
Greenfield. The wine list includes New York
state selections, but features wines from all
over the world, with an emphasis on smaller,
family-owned vineyards.

Hall said one of the beverages most requested
by customers is a sangria that includes
Protocolo rose, St. Germain, lemon juice, and
cucumber. Other customer favorites have
included beer and wine flights, with opportunities
to sample four varieties.

The double-cut pork chop with ginger
applesauce, maple bacon, sweet potato hash,
cilantro, and fresh apples is a much-requested
entree, he said. Customers have become fast
fans of the flourless chocolate cake and of a
plate that allows three small samples of various
desserts.

Hall said the menu changes every two weeks
according to availability of fresh local ingredients.
Daily specials are posted on Next Door’s
Facebook page.

Hours are 5-9 p.m. on Wednesday and Thursday,
5-10 p.m. on Friday and Saturday, and
5-9 p.m. on Sundays. Reservations are recommended.
They can be phoned in at 309-3249 or
emailed to info@eatdinnernextdoor.com.