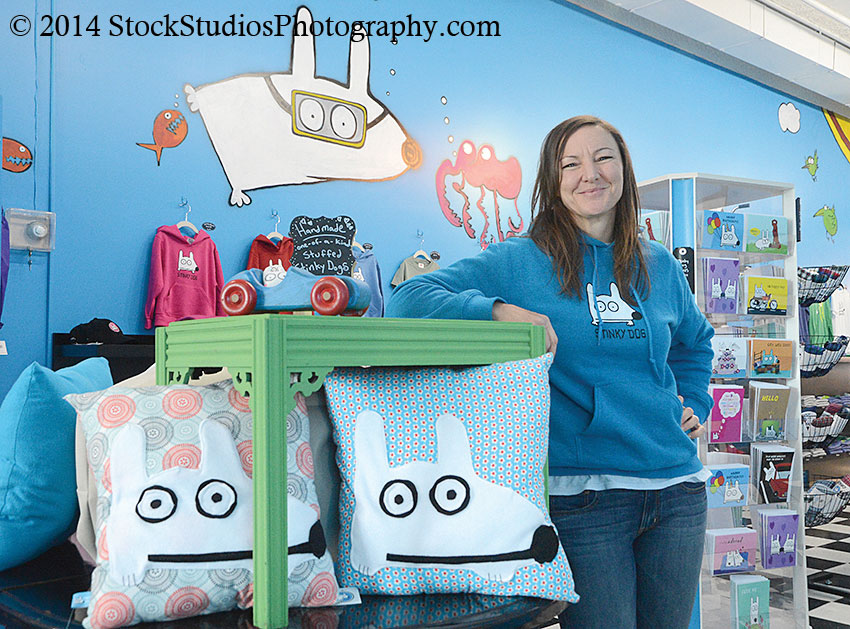 Samantha “Sam” McCullough owns and operates Stinky Dog boutique, 488 Broadway, where she sells a product line based on a character she created while living in Oregon

Broadway in Saratoga Springs became
home to a new gift shop in October.
Samantha “Sam” McCullough opened
Stinky Dog boutique at 488 Broadway, a
couple of doors down from City Hall.

Stinky Dog is a one-woman operation,
with support from McCullough’s husband
and sons. The products are fashioned according
to the Stinky Dog theme that was
developed in an odd fashion.

McCullough said that growing up she
had about 50 different addresses. She was
born in England. Other homes included a
sailboat in San Francisco, a dorm house
in Yosemite National Park, the barrio in
Los Angeles, and a mansion in Newport
Beach, Ca.

Later, she traveled in India and Nepal.
Back in the United States, she met the man
in Portland, Ore., who would become her
husband. The man had a dog, rescued from
the pound, that was inclined to activities
like chewing buttons off from coats and
frequently rolling in various odoriferous
substances, earning itself the nickname
of Stinky.

When the man’s birthday arrived, McCullough was short of cash and, for a gift
chose to sew him an effigy of Stinky, fashioned
from a discarded tweed coat.

For friends who were enchanted with
the stuffed Stinky, McCullough began to
make doodles and cartoons with the Stinky
image. She said they convinced her that
she could make money with her Stinky
art and she began to sell items with the
Stinky image at the Portland Saturday
Market in Orgeon, where Stinky Dog’s
popularity spread.

McCullough and her family moved east
and settled in Northville, in nearby Fulton
County. She wanted to continue selling art,
but she puzzled over how to create a lucrative
market for her goods in Northville. She
had meanwhile started to produce t-shirts
with a caped Super Stinky image.

McCullough opened the Stinky Dog Co.
store in Northville in 2007, but eventually
closed the store. She said friends suggested
she start selling Stinky goods on
eBay, where sales were successful, but she
found her house was becoming overrun
with Stinky merchandise.

It was suggested she try marketing
Stinky Dog products at Saratoga’s Art in
the Park. The Saratoga market seemed to
enjoy Stinky Dog, which lead to the development
of the Broadway store.

Stinky Dog can be found online at
stinkydog.com.