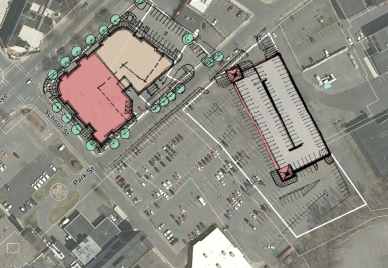 Saratoga Springs-based developer Sonny
Bonacio has turned his attention to Glens Falls,
with a $25 million project that is being called
“transformative” for that city’s downtown.

Bonacio, whose Bonacio Construction is responsible
for several residential and commercial
projects in Saratoga, and the Rotterdam-based
Galesi Group have purchased property from Glens
Falls Hospital and will spend the $25 million to construct a six-story, 150,000 square-foot mixeduse
building there.

Plans call for a grocery store, office space and
80 market-rate apartments on the parcel at 14
Hudson Ave., east of the hospital. The property
currently holds a parking lot.

The plan also calls for the construction, by the
Glens Falls Industrial Development Authority, of
a 500-540-space parking garage on Park Street, behind the six-story building. The IDA received
$3 million from the state to support that project,
which has a total price tag of about $6 million.

“I would classify this as really a major, transformative
type of project,” said Edward Bartholomew,
who heads the IDA as well as the Economic Development
Corp. of Warren County. “We are taking
a very under-utilized piece of property–which is
off the tax rolls right now–placing it back on the
tax rolls and having a mixed-use commercial retail
and residential project go up on that property.”

The project will not contribute to the tax rolls
immediately, however. The IDA, on Nov. 13, approved
a 15-year tax abatement for the property.
The full value of improvements will be exempt
from property taxes for the first 7.5 years. For
the next 7.5 years, it will be taxed at 50 percent
of the value.

Larry Novik, director of business development
for Bonacio Construction, said the project would
not be possible without the tax abatement.
“The simple reason being, these buildings cost
the same whether you build them in Saratoga
Springs or Glens Falls, but the rent structure, the
income potential, in the building is different just
because of the different price points in the city,” he
said. “Obviously, Glens Falls has a somewhat lower
price point than Saratoga and we have to try to
make up that difference to make a viable project.”

According to the website MyApartmentMap.com, the average apartment available for rent
in Glens Falls in November was $1,200 a month,
compared to $1,800 in Saratoga. Furthermore,
property taxes are higher in Glens Falls.

Bonacio and Galesi last teamed up on Market
Center, a mixed-use project on Railroad Place in
Saratoga Springs. Market Center includes the
Price Chopper Limited small-format grocery store
as well other retailers and 124 apartments ranging
from one to three bedrooms.

Novik said the company is doing its first project
in Glens Falls because it was drawn to the city’s
“really nice sense of momentum.”
“When you start to see the streetscape get
more developed and nice businesses moving in
and people walking the downtown and enjoying
the amenities of downtown it’s a great feeling,” he
said. “And we’d like to be part of that.”

The first floor of the building–which at the
moment is simply being called “14 Hudson”–will
contain 40,000 square feet of retail space, most
likely containing a grocery store like Market Center.
“We do not have a commitment from a supermarket
yet,” Novik said. “We are working with a
number of potential tenants and entertaining a
few possibilities for the anchor. We work really
hard to find the right fit that blends well with the
urban environment and our upstairs tenants and
what their needs are.”

The other five floors will each measure about
22,000 square feet. Novik said plans call for about
half of the second floor to contain office space “and
we are somewhat flexible in how that configures.”
The remainder of the second floor, and the
entirety of the other floors, will provide space for
80 residential units ranging from one to three
bedrooms.

Novik said more than half of the units–44–
will be one-bedroom dwellings. The exact
breakdown of the remaining units is still being
determined, but Novik said at this point the plan
is for 26 two-bedroom and 10 three-bedroom
apartments.

“We are trying to create good, market-rate
housing,” he said. “Our units are fairly upscale.
We have granite countertops, stainless steel
appliances [and] wood floors throughout the
common areas.”

The IDA’s parking structure will be built first, to
ensure the needs of Glens Falls Hospital are met
before the parking lot at 14 Hudson is removed.
Bartholomew said the IDA hopes to break ground
in the later part of this year or early in 2015. He
projected it would take six to eight months to
build the garage.

Novik said Bonacio and Galesi will be ready to
start their project as soon as the parking garage is
completed next summer. He said the mixed-use
building should be up in about a year, although
some interior work might take longer than that.
That would put the opening in mid-to-late 2016.

Bartholomew said the city has been working
with Bonacio for a while now, trying to find the
right concept for a downtown project.
“I think we hit on the right formula,” he said.

“There are a lot of positive things occurring with
that project. It will provide jobs and parking, not
only for the hospital and [the tenants in] the
Bonacio-Galesi building, but also for downtown
shopping, restaurants, the Civic Center and the
Wood Theater. Hopefully this development will
lead to subsequent other development projects
in our downtown area.”