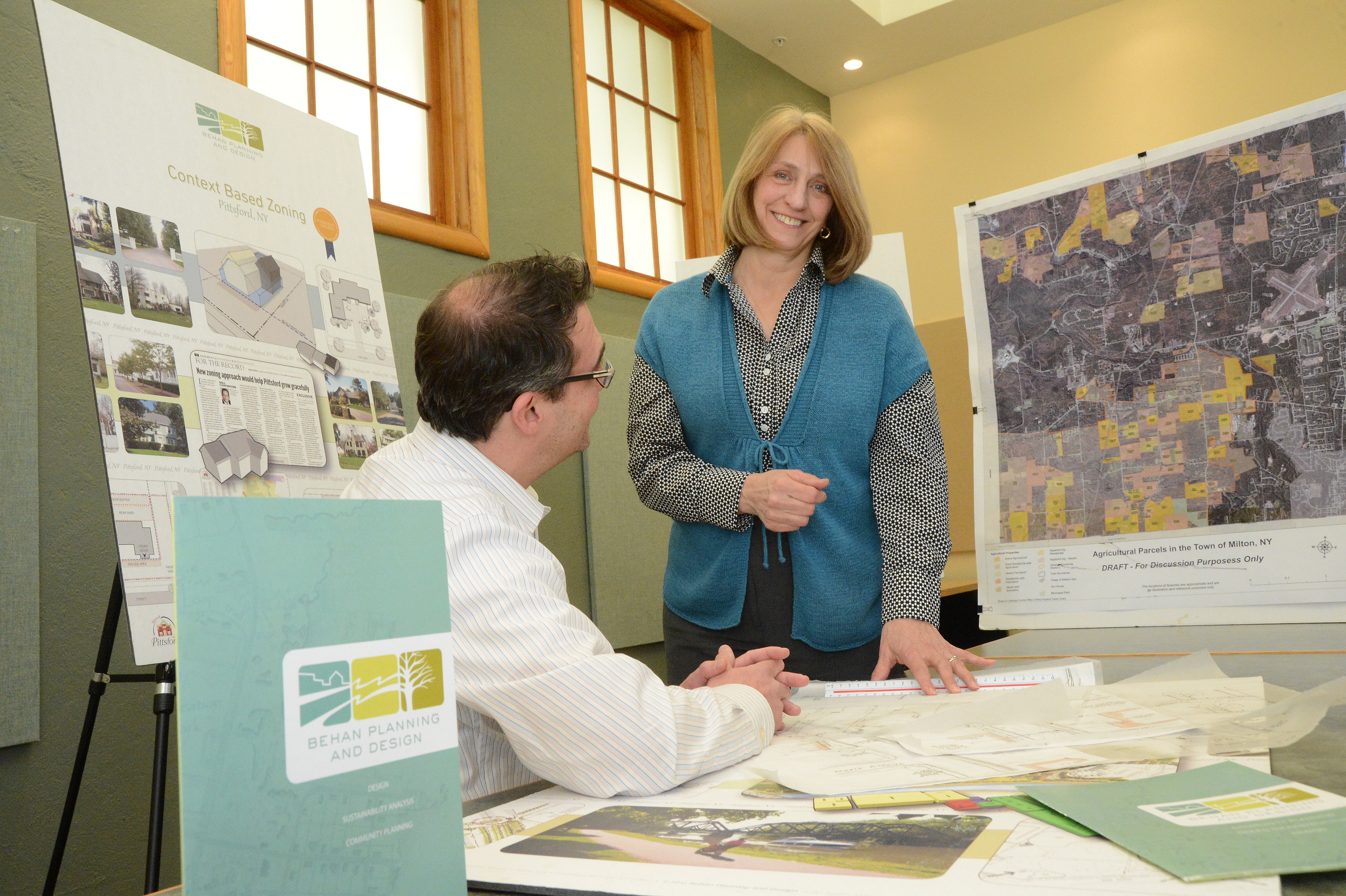 Cynthia Behan, a principal in Behan Planning
and Design, DPC, eased into full-time
responsibility slowly, working part-time from
home when she had small children.

Today, with the children in their 20s and
only one of them still at home, the landscape
architect and designer is a principal in a
business with nine employees and offices in
Saratoga Springs and New City, Rockland
County, New York.

She began helping with her husband’s
business, Planning Associates, formed some
20 years ago in Saratoga Springs. Later, she
created her own company, Behan Design. The two merged to form Behan Planning
and Design, a design professional corporation
(DPC).

They recently added a professional engineer
with experience in subdivision planning and
project management to their staff with a view
to expanding into that area as well.

The firm’s design of the South Main
Streetscape Project in New City received the
2014 Merit Award of Achievement from the
New York Upstate Chapter of the American
Society of Landscape Architects. That award
joins many others on the walls of the firm’s
offices.

Behan grew up in Newburgh, N.Y., the
home of Andrew Jackson Downing, Frederick
Law Olmstead’s mentor. If Olmstead is the
father of landscape architecture in the United
States, Downing has to be the grandfather,
Behan said. A park in Newburgh, designed by
Olmstead, is dedicated to Downing’s memory.

Landscape architecture must have been in
the air in Newburgh. When she was in ninth
grade, Behan’s guidance counselor told her
that she should be a landscape architect.
Unfortunately, neither the counselor nor Behan
knew exactly what a landscape architect
does, she recalled, and “there was no Internet
to look it up.” However, for the daughter of a
civil engineer father and an artistic mother,
it turned out to be a good fit.

Her work is not just picking out plants but
has many other components, she explained,
including community planning, street design,
redefining what a street looks like, including
such factors as parking and traffic circulation.
In fact, she is “not a great gardener,”
although she has a strong interest in plants
and gardens, “but not enough time to do it
myself.”

She finds that being a woman has not been
a factor in her professional life, at least not
lately. “I’m glad the world has changed and
women are accepted in professional roles,”
she said, “I am no longer the only woman at
the table.”

The staff of Behan Planning and Design has
a good balance of men and women, she noted.
On the other hand, she thinks that women
often have a different way of looking at things
than men do. “It’s hard to define,” she noted.

There have been challenges to working
with her husband, she said, but would not
elaborate. “He is supportive and helped me
all along the way,” she said, and helps with
his share of the housework as well.

Two of their children have gone off into different professional directions: one is in
medical school and the other works in finance
in Chicago. The youngest one, however, a
community college student, is interested in
sustainability and some of the things the firm
does, she said.