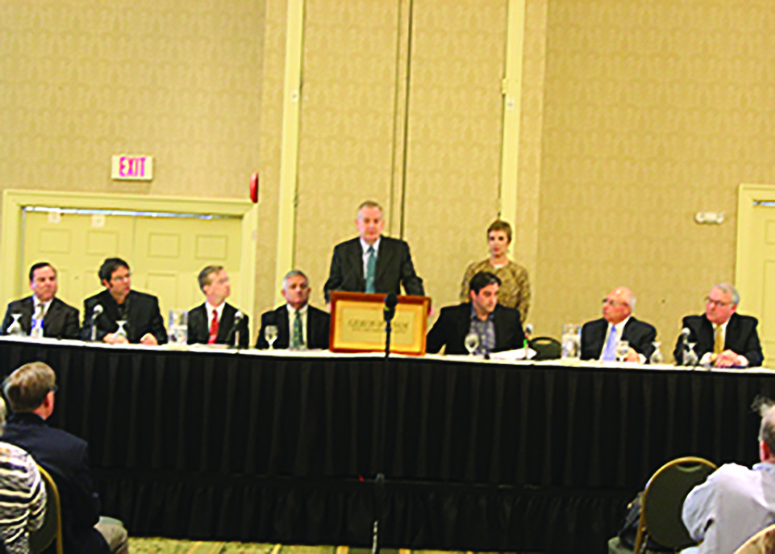 Officials of the Saratoga County Chamber of Commerce, Saratoga National Golf Course and others discuss a development project at a recent session at Gideon Putnam Resort.

A proposed major development at Saratoga
National Golf Club on the east side of Saratoga
Springs is being touted by its supporters as a
major economic boost to the city, providing
amenities that will continue to boost the area’s
robust tourism.

Supporters also say the project–which includes
a five-star “boutique hotel,” cottages for
out-of-town visitors to use for extended golfing
excursions, and residential units–will be in
keeping with the “green belt” nature of the property
on the east side of the Northway. However,
they need special approval from the City Council
before proceeding with the green-friendly plan.

The council is nearing a decision, but Mayor
Joanne Yepsen said at press time, there would
be no decision at the April 7 meeting. Yepsen
said there will be at least one more workshop
on the matter held before a decision is made.
“There’s a whole process,” she noted, regarding
any such change.

It was outlined on March 16, where plans were
discussed at an event hosted by the Chamber at
the Gideon Putnam Resort and Spa.

Opposed to the idea is a group called Sustainable
Saratoga, a nonprofit organization that
promotes sustainable practices and the protection
of natural resources in the city. The group
was invited to the March session, but declined,
saying in a statement that they viewed it as “a
marketing event to launch a specific development
project which is exactly the opposite of the
comprehensive perspective we find appropriate
for this level of planning.”

Officials presenting the plan, including the
owner and architect, said that while it would
turn the site into a five-star destination golf resort–
something they say is needed in the city–
it will also be “green space” friendly and will
ensure that 97 percent of the 550 acres could
not be developed in the future and would remain
green open, recreational space. Mike Toohey,
an attorney for the project, said it actually is in
line with green belt principles and ensures that
growth in the area will be controlled–most of
it staying green for perpetuity.

The golf project is also tied to the creation of
the Saratoga Springs Green Belt Trail, a recreational
trail for bicycles and others that would
make many of the key attractions of the city accessible
through one connected trail for walkers,
cross-country skiers, runners and bicycle riders.

Jeff Olson of Alta Planning + Design, said the
trail would be a major step in linking many of
the city’s major amenities and destinations and
is an important part of the “city in the country”
concept the city has been trying to foster.

Proponents of the golf project hope the city
will approve the “resort overlay district” proviso
that would allow the project to move forward.

Toohey said under current zoning, the course
owners could go ahead and build residential
homes on the property, with little regard to
whether they might be close to the road or
unsightly in some people’s eyes. That is not
what the owners want, he said. That would be the urban sprawl that the owners and designer
want to avoid. The proposal calls for the development
to take place on only 10 acres that are not
currently developed, and the buildings would be
some 3,000 feet from a roadway.

Toohey said that the proposed arrangement
is a solution to green-space concerns, that also
allows the golf course to improve. That improvement,
officials said, will benefit the entire city,
including the downtown business district, by
bringing in more tourists. People on golf outings
will look to take advantage of local restaurants
and shopping while they are in the city.

Tourism Bureau President Todd Garofano
said the area lost out on a potential $7 million in
extra business last year because it does not have
a five-star golf course. He said 20 large groups
were searching for a four- or five-star golf resort
destination and wound up going elsewhere.

Tom Newkirk, Saratoga National CEO, said
the project is a “once in a lifetime opportunity”
and would make the golf course and its amenities
a major economic driver for the city.

Michael Phinney of the Phinney Design Group
in Saratoga Springs, said they would like “to
take what is a jewel of a landscape and use it
to benefit Saratoga Springs and make it truly a
destination” for worldwide tourism.

It’s designed in four phases. The first is a
practice facility and golf academy. The second is
expansion of the clubhouse to include an event
pavilion and meeting space. The third would be
the 100-room , five-star hotel, with a wellness
center and spa, along with cottages for small
groups. The fourth phase is 100 residential units
and connecting the Green Belt Trail.

Toohey said the expansion would generate
nearly $1.5 million in new property taxes, about
$420,000 in hotel occupancy taxes annually.
Employment numbers would be hiked by 260
jobs. It currently employs 432 people.

Proponents are hoping for open discussion of
the project at the city level. Several people in the
audience lauded the project during a question
and answer session.