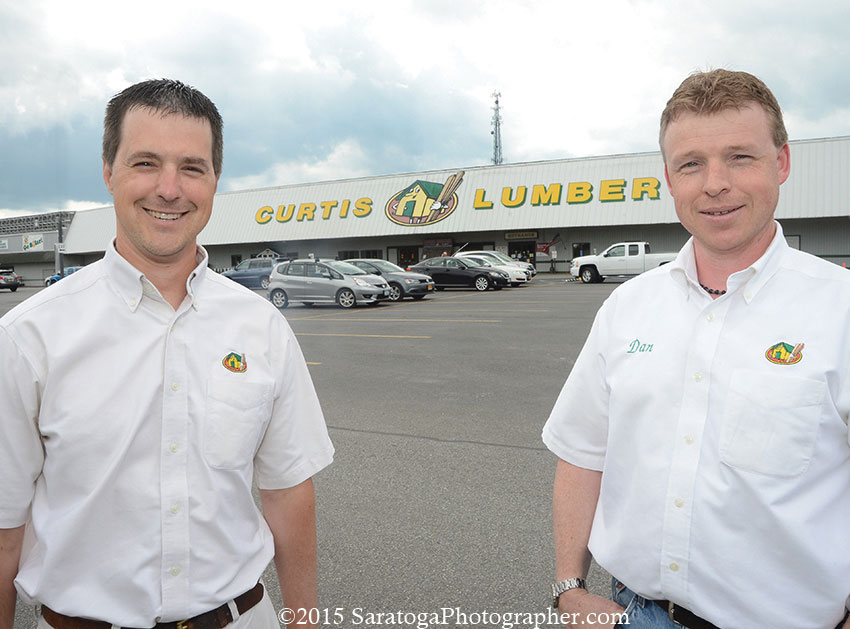 Bob Eakin, left, and Dan Nelson, employees at the Curtis Lumber, stand outside the store in Ballston Spa. The business now has grown over 125 years and now has 21 stores in its fold

Curtis Lumber, a well known lumber yard for
contractors and do-it-yourselfers, is celebrating
125 years in business.

Founded in 1827 by Captain Isaac Henry Curtis
as a sawmill, the family-owned independent
company has bloomed into a 21-store operation
employing around 570 people full-time.

“The two biggest things driving our success in
the region are people and customer service, said
Doug Ford, general manager of the Ballston Spa
location. “Curtis Lumber has a habit of hiring
good people and keeping them. My average staff
member has been here over 15 years. Many have
been here over 30 years. Curtis Lumber has a
philosophy of listening to our customers. We pay
attention to what works and don’t try change
the game all the time. We are consistent.”

Ford has been with Curtis Lumber for 19
years. Prior to Curtis, he worked for 17 years
with Grossman Lumber. “Prior to that, I went
to school to be a high school math teacher and
ended up in the lumber business by default,”
he said.

Jay Curtis, CEO of the company, is the fifth
generation in the Curtis Lumber lineage. His
son and daughter both work for the company
and represent the sixth generation. Curtis
became president of the company in 1992, assuming
ownership of nine stores from his father
and expanding to additional stores shortly after.

Ford said that, while there has been an increased
demand for green and energy-efficient
building products in recent years, consistency
in customer service is what has driven the company’s
success. He said part of good customer
service is equipping employees with knowledge
and ability.

“Customers are always looking for good service
and that’s something that we give them. We
deal with middle and higher end products. We
don’t try to play down our price with imports
and low price-point items like our competition.
We carry quality products, brand names. We
invest in customer service. We spend a lot of
money training our employees so they can do
more than just find something on a shelf for a customer,” said Ford.

Curtis Lumber is involved with many area
organizations, including Rotary, local chambers
of commerce, business associations and
homebuilders organizations. The Ballston Spa
location hosts a farmer’s market every Friday,
as well as Lion’s Club events, a yearly car show
and a Pet-A-Palooza pet adoption event. Jay
Curtis is an avid animal advocate.

All stores are involved with their respective
communities.
“One of the big reasons we’ve been so successful
is that we are willing to get involved in
the communities our stores are in. We are encouraged
from the top down to be involved, not
just come to work, do our job and go home–we
want more than that,” Ford said.

Said Ford, “As far as future plans go, Curtis
is always looking to grow. It has to be the right
opportunity and the right market. We are a
community-driven company, so we look to be
in communities where we are welcome and we
provide a value to the community.”

The Curtis Lumber timeline for its history in
the area includes:

1955 – Store rebuilt in Charlton. Expands into
hardware with 11 employees.