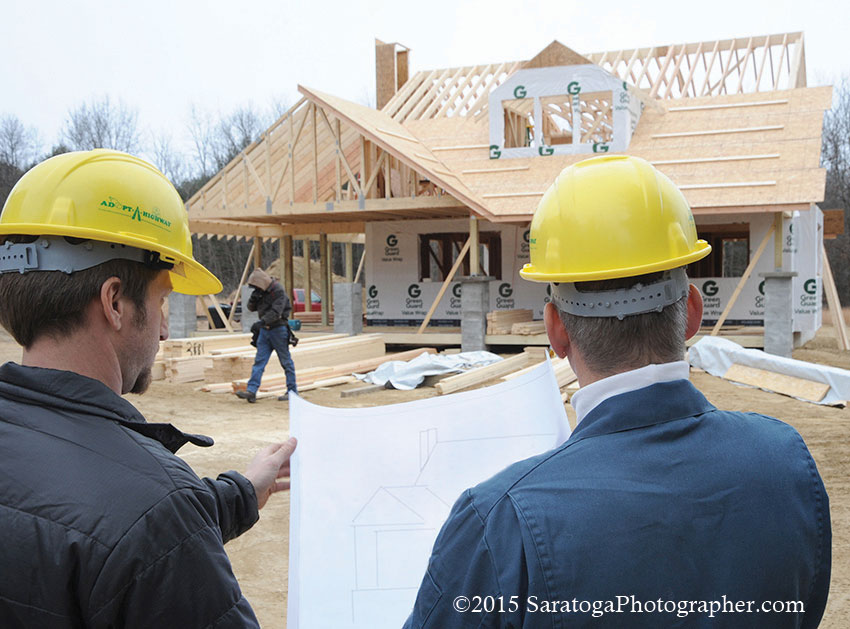 Construction projects like this one in Saratoga County are keeping people in the building trades busy. A regional union official says wages are high and the industry is currently strong.

Construction workers in the region are
finding plenty of work and modest increases in
wages as the business recovers from a “rough
winter,” according to Jeff Stark, president of
the Greater Capital Region Building and Construction
Trades Council, an AFL-CIO union
representing some 22,000 workers. Most of the
trades, he said, are at or near full employment.

He estimated that union workers earn 20-30
percent more than non-union workers and enjoy
health insurance, retirement benefits and other
types of insurance jointly paid for by the union
and employers.
“Right now, we are doing pretty well,” he said.

For employers, the extra money paid in wages
and benefits means more efficient and better trained
workers who end up costing contractors
less in the long run, according to the union
president. “We build more efficiently and we’re
better at it,” Stark said. “We don’t let a guy on
the job without skills.”

He said union workers spend four or five
years as apprentices in a formal program of
instruction and mentoring by skilled journeymen
and are required to pass a series of exams
before they are ready to work on their own. He
noted that the council’s apprenticeship program
is recognized by both the state Department of
Labor and the state Education Department and
compares it to a college education.
“We are a leader in the industry,” he said.

Graduates of the union’s apprenticeship
program are well prepared and well equipped
with the tools of their trades, he noted. “It comes
down to efficiency.”

On the other side, the union works with
“contractors who are extraordinarily good at
what they do. They pay their bills. They obey
the law,” Stark said.

The union contracts separately with different
employers. In particular, they negotiate wages.
Wages, according to Stark, depend upon how
much work a contractor has and how much
money they are making. “Right now, they are making money,” he commented. They also
negotiate the amount of contributions to various
benefit program and how those funds will
be allocated.

Another benefit for employers who use union
labor, Stark said, is “if they call the union hall
when things are tight, they are assured of finding
workers.”
He estimated that 90 percent of the construction
in the greater capital region is done by
union employees.

The union represents workers in 14 building
trades in a geographical area stretching from
Columbia and Green Counties in the south
up through Washington and Warren Counties.
Membership has been growing “modestly” for
the last decade, according to Stark.

While he boasts of the efficiency of the union
workers, Stark also points out that “this is the
only job in the world where the better and
faster you work, the quicker you work yourself
out of a job.”

Stark has been president of the Greater Capital
Region Building and Construction Trades
Council since 2011. He was elected to a second
three-year term in 2014. He pointed out that it
is an unpaid position to which he was elected
by his peers.

The group is an affiliate of the New York State
Building & Construction Trades Council.