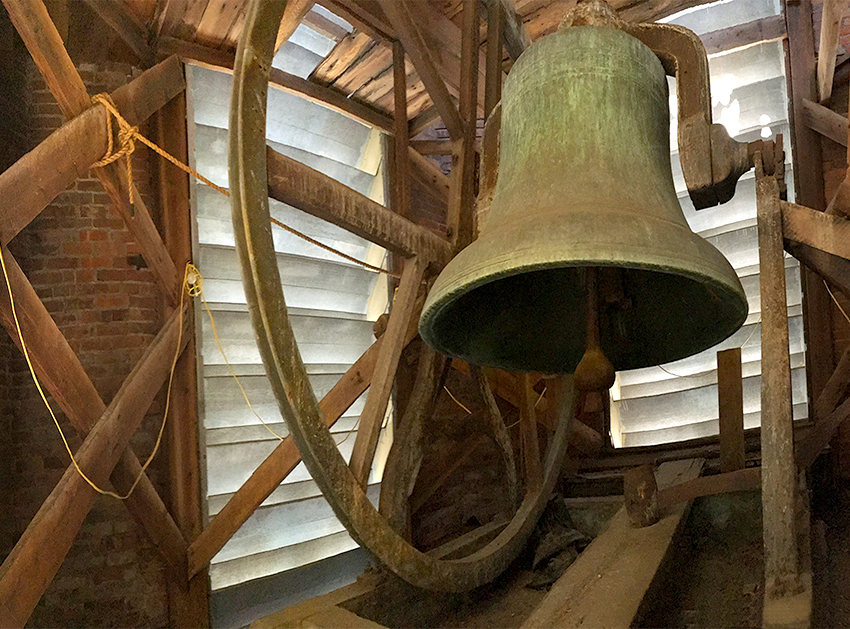 This bell is part of the historic Universal Preservation Hall building being renovated into a
performance venue. The facility is getting a state grant to hire a director to oversee the restoration.

The Capital Region economic sector, which
includes Saratoga County, was not selected in December
as one of the three winners of the Upstate
Revitalization Initiative, a $1.5 billion, five-year
economic development competition that would
have brought $500 million in state funds to the
region for various projects.

But the Capital Region received $98.1 million
in aid for projects this year, of which about $2.1
million is specifically earmarked for projects in
Saratoga County.

The winning regions in the competition were
the Finger Lakes, the Southern Tier and Central
New York.

However on Dec. 10, Gov. Andrew Cuomo
announced the awarding of $2.25 billion in
economic and community development funding
through Round V of the Regional Economic
Development Council initiative and the Upstate
Revitalization Initiative.

“Over the past five years, the Regional Councils
have become an integral part of generating economic
opportunity in communities statewide,”
said Cuomo. “By removing barriers to growth,
controlling spending and cutting taxes, we have
laid the groundwork for our Regional Councils
to pursue projects in key industries that have
turned their communities into local economic
engines. This year’s round of awards demonstrates
the progress that has been made in changing the
trajectory of our economy and continues our
commitment to investing in the future of New
York state.”

The Regional Councils were established in 2011
to transform the state’s approach to economic
development from a top-down model to one that
is community-based and performance-driven.
The initiative empowers community, business,
and academic leaders, as well as members of
the public in each region of New York state, to
develop strategic plans specifically tailored to
their region’s unique strengths and resources in
order to create jobs, improve quality of life and
grow the economy.

This year, the 10 councils once again competed
for funding and assistance from up to $750 million
in state economic development resources
as part of Round V of the REDC competition.
Additionally, a new competition, the Upstate
Revitalization Initiative, awarded $1.5 billion to
three regions, which will help to transform local
economies by providing $500 million over the
next five years to support projects and strategies
that create jobs, strengthen and diversify
economies, and generate economic opportunity
within the region.

Lt. Gov. Kathy Hochul, chairwoman of the
Regional Economic Development Councils, said.
“I have watched how Regional Councils have
helped communities put their best ideas into
action. Economic development is more than just
dollars and cents. It’s about restoring hope and
optimism to communities yearning for a brighter
future. This year, there are no losers. Non-winning
regions this year will receive more funding than
top performing regions last year. ”

Since 2011, the Regional Council process has
awarded nearly $3 billion to more than 3,100 job
creation and community development projects
across the state, supporting the creation or retention
of more than 150,000 jobs, according to
state officials.

The Capital Region was awarded $98.1 million
supporting 114 projects for this year. The
governor’s office said in a statement that as the
Capital Region transformed into a global center
for nanotechnology research, development and
manufacturing, downtowns in communities
across the region are experiencing revitalization
and a growing tourism industry.

This year, the REDC focused on projects and
strategies that have the potential to add 40,000
more jobs to the local economy, attract and retain
10,000 new residents, employ 4,500 residents who
are currently unemployed, and lift 20,000 local
residents out of poverty, according to the governor.

The Saratoga County projects that received
awards were:

â€¢ Universal Preservation Hall in Saratoga
Springs, $49,500. The hall will hire a full-time
executive director to oversee the restoration of
the facility and grow the organization’s fundraising
capacity.

The organization also received $800,000 to
fund a partnership with Proctors in Schenectady
to finish restoration of the historic property into
a performance venue.

â€¢ The Saratoga Rowing Association received
$35,000 to upgrade the Saratoga Regatta Spectator
Experience by making significant improvements
to how spectators are able to view the regatta.
Improvements include adding the use of drones,
large screens, bleachers, a pavilion, and land and
facility upgrades to stay competitive with other
out of state regatta venues. Saratoga Rowing Association
also will use a bus to provide shuttle
service to downtown Saratoga Springs aiming
to increase attendance, provide a significant
economic impact on local industries, and make
Saratoga a premiere regatta destination.

â€¢ Mohawk Gateway Streetscape Project,
$370,000. The Town of Waterford, in partnership
with the Village of Waterford and the Waterford
Historical Museum, will implement the Town/
Village Local Waterfront Revitalization Program
by improving the southern gateway corridor and
Northside Historic District. The projects will include
design and construction of signs, sidewalks,
street trees, landscaping, lighting, furniture and
green space; road repairs to facilitate park and
museum access; and a museum enhancement
feasibility study.