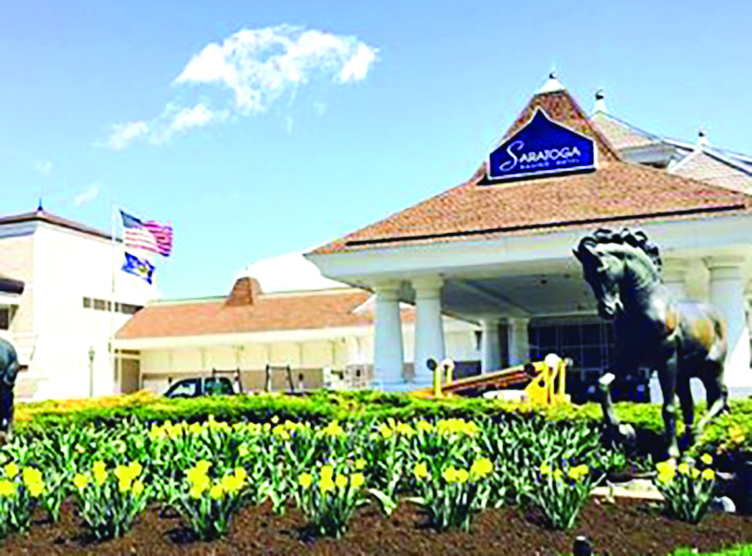 A new sign, ‘Saratoga Casino Hotel,’ was erected at the casino on Jefferson Street in Saratoga Springs. The casino is rebranding itself in anticipation of opening its new hotel in June.

The change took place immediately, in advance of the anticipated opening of its new 117-room hotel expansion.

Officials said the brand change reflects the casino’s transformation into a comprehensive, modern destination that offers something for everyone.

“The addition of the hotel and its amenities, including Morton’s The Steakhouse, creates an entertainment experience unmatched in the region,” said Rita Cox, senior vice president of marketing at Saratoga Casino Hotel. “Our new brand is a product of this transformation, highlighting that we are a complete entertainment destination within the already world famous tourist destination that is Saratoga Springs. First-time and repeat guests alike will find new reasons to visit, and to keep coming back, for all that we have to offer.”

Featuring 117 luxury rooms and suites, the hotel will be located just steps away from the casino floor and harness track. The hotel’s premium rooms and suites are named after the raceway’s founders and longtime President, Roland Harriman, Dunbar Bostwick, and Ernest Morris. Suites feature large bay windows, and many overlook the harness track. Additionally, guests will be able to watch and wager on live harness racing from every room in the hotel.

“We view the hotel as a natural next step for this property,” said Cox. “Racing began here 75 years ago, and we haven’t stopped growing and evolving since then. Our new brand reflects our commitment to providing new amenities and entertainment opportunities for our guests, with racing always at the core of who we are.”

A full-fledged rebranding campaign for the casino is now underway, including a newly designed website. Revamped TV spots, radio ads and billboards for Saratoga Casino Hotel are part of the effort.

Cox said more than 100 new jobs will be created as a direct result of the hotel expansion. A job fair will be held on May 16 inside the Vapor nightclub space from 2-6 p.m., which will provide more information on the newly created positions.

Openings will include banquet staff, cooks and wait staff at Morton’s The Steakhouse, hotel front desk staff, and room attendants. On-the-spot interviews will be offered for prospective candidates.

Also in April, the casino it generated $244 million in statewide economic output last year, according to the New York Gaming Association’s 2015 annual report, .

Local racing also benefited tremendously from the output at Saratoga Casino Hotel, with racing and breeding industries receiving over $16 million in funding.

Saratoga Casino and Raceway also paid out a total of $19.2 million to their 561 employees.

“We’ve worked very hard to attain these results and are extremely proud of the economic output we provide the Capital Region,” said Tom Wiedmayer, general manager of Saratoga Casino Hotel. “We’re looking forward to carrying this momentum into the opening of our hotel this summer and into the latter half of 2016.”

Statewide, NYGA facilities have been a strong source of economic activity on both the state and local levels, providing funding for public schools, tax revenue for local governments, capital investment that generates construction jobs, and support for businesses, including the local tourism and hospitality industry, officials said.

In the annual report, findings for the nine NYGA facilities in the state include:

â€¢ $40 million in capital investments to NYGA’s facilities in 2015, and $1.5 billion since building the original facilities.

â€¢ $27 million for breeding and agricultural related businesses such as family farms, feed producers and veterinarians.