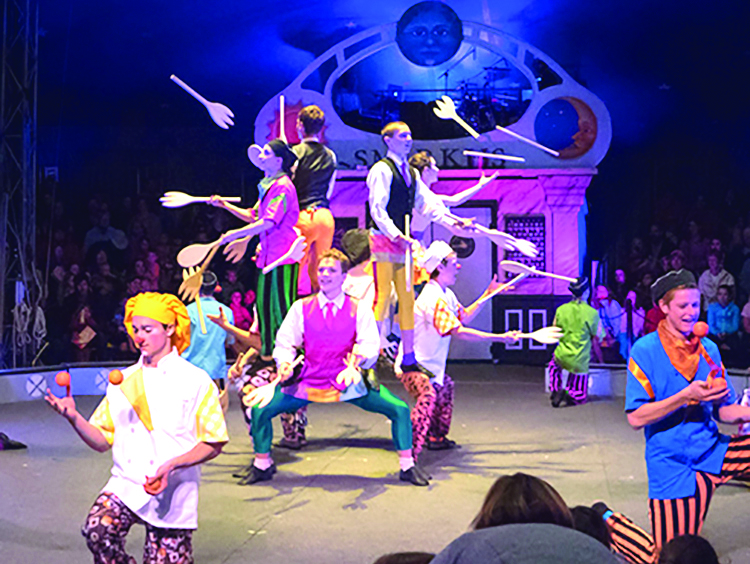 Thirty performers ages 11-18 comprise the Circus Smirkus that returns to the outdoor polo field at Saratoga Casino Hotel for four performances this summer.

The performances on July 8 and 9 will benefit the Waldorf School of Saratoga Springs.

The Waldorf School of Saratoga Springs first brought Circus Smirkus to Saratoga in 2007 as a fundraising and outreach event.

“We have valued our partnership with Circus Smirkus over the past 10 years and can’t wait to present this year’s colorful production to the community,” said Anne Maguire, administrator of the Waldorf School of Saratoga Springs. “The Waldorf School and Circus Smirkus are a natural combination. We share the core values of dedication and hard work to help children realize their unique potential.”

The show features aerials, acrobatics, wire walking, juggling, clowns, live music and an array of costumes. Circus Smirkus is the only American youth circus to put on a full-season tour under its own big top, a 24-meter, 750-seat, one-ring tent in the European style, according to circus officials

Tickets are $25 for adults 13 and older and $23 for children 2-12. Children younger than two are free on an adult’s lap. Tickets are available starting by calling 1-877-SMIRKUS toll-free or visiting www.smirkus.org. They are also available at the Children’s Museum at Saratoga, 69 Caroline St. and at Crafters Gallery, 427 Broadway.

Circus Smirkus is a nonprofit international youth circus founded with the mission of promoting the skills, culture and traditions of the traveling circus and inspiring youth to engage in life-changing adventures in the circus arts. The 2016 Circus Smirkus Big Top Tour will include 67 performances this summer between late June and mid-August. Now in its 29th year, the Vermont-based organization has raised over $2.5 million for non-profit partners.

Currently entering its 33rd year of operation, the Waldorf School of Saratoga Springs educates children from pre-school through the 12th grade. For more information, visit www.WaldorfSaratoga.org.