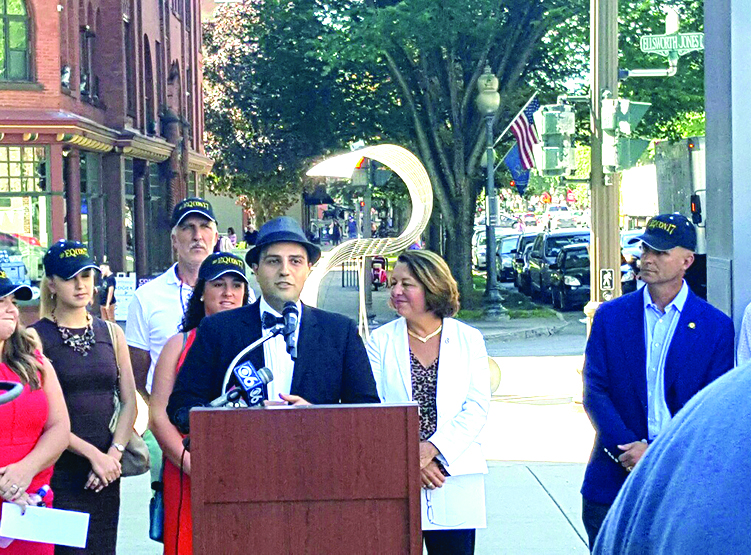 Saratoga Springs has been selected to be the host city next year for a first-ever international horse racing convention and industry trade show.

The inaugural event–called Equestricon– will bring together fans, horseplayers and stakeholders from every corner of the sport in an atmosphere of non-stop entertainment and lively discussion, organizers said.

Equestricon LLC., the group producing the show, announced the event on Sept. 2 outside Saratoga City Center in Saratoga Springs.

Equestricon 2017 is scheduled to kick off on Sunday night, Aug. 13 and continue through Tuesday, Aug. 15. It will be held at the Saratoga Springs City Center.

“Above all else, we are focused on one thing–the racing fan,” said Dan Tordjman, co-founder of Equestricon and correspondent for America’s Best Racing. “Equestricon is committed to creating an extremely fun and unprecedented outlet for any and all racing enthusiasts to engage with the sport like never before.”

He said the preliminary schedule for Equestricon 2017 includes plans for several entertainment areas, include a racing arcade and bar, live music, around-the-clock autograph signings, meet-and-greets with current and past racing stars, a fashion showcase, product and technology demonstrations, rows of exhibitor booths and more.

Saratoga Springs Mayor Joanne Yepsen was among the speakers and reflected on the impact the first-ever racing convention of its kind will have on the city.

"There is no better place for this one-of-a-kind celebration of the sport than Saratoga Springs," Yepsen said. "We are excited to write the newest chapter in this city's rich racing history and we are confident that Equestricon will bring together local businesses, our residents and the larger racing community."

In addition to Tordjman, Equestricon is being spearheaded by horse owners and breeders Kathryn Sharp and Justin Nicholson. Sharp and Nicholson founded the highly successful Ninety North Racing partnership in the spirit of attracting new owners to the sport of racing.

"On a grand scale," Sharp said, "we're building the foundation upon which the industry can unite, meet face-to-face with its fans and end users, and present the sport of racing as a cohesive entertainment industry. Long term, we envision Equestricon becoming the ultimate showcase for, and celebration of, advances in the areas of aftercare, technology, marketing, fan development and more."

Todd Garofano, president of the Saratoga Convention and Tourism Bureau, said "When we first sat with the organizers of Equestricon, we felt this was a home run. To bring together the many facets of the horse racing universe here in Saratoga Springs, while the most popular summer meet in the country is taking place, further shines the light on racing's most iconic and enduring destination."

Equestricon also announced that the Thoroughbred Aftercare Alliance (TAA) will be its official charity partner. The TAA is a nonprofit group that accredits, inspects and awards grants to approved aftercare organizations to retire, retrain and find homes for thoroughbreds using industry-wide funding.

"In forging such a significant immediate partnership, Equestricon is making a bold statement about its core values and the essential role of aftercare in racing," said Stacie Clark Rogers, TAA operations consultant.