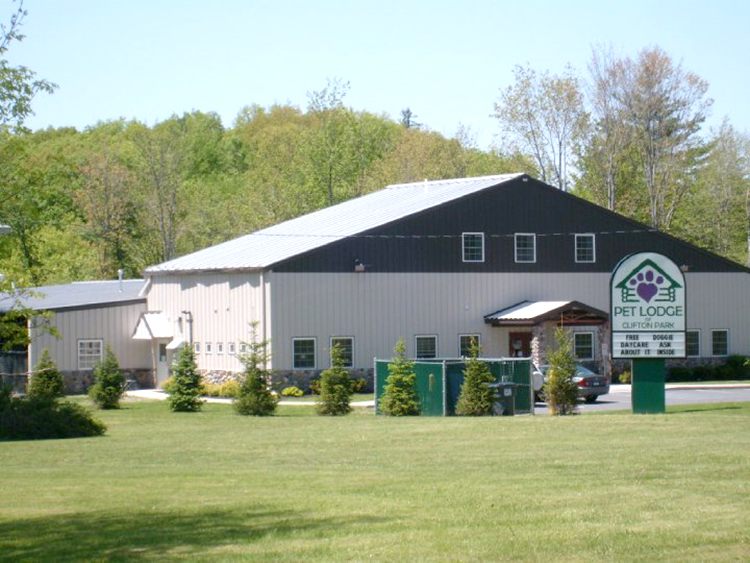 This is the Pet Lodge facility in Saratoga County, located in Clifton Park. The company is making plans for a new building in Saratoga Springs, which would be its sixth overall.

Pet Lodge, a dog day care and boarding company, is seeking to establish a sixth location, this time in Saratoga Springs.

The owners have proposed a plan to construct a new facility at the southern end of the city.

The company started in 2012. Currently there are locations in Clifton Park, Latham, Glenville, Plattsburgh and Williston, Vt.

“We love Saratoga. We think it is a perfect place to open a business,” said Matt Sames, managing partner of Pet Lodge. “People have been asking us for years if we would open a location in Saratoga.”

Sames and his business partner, Dr. Tom Brown, are proposing the construction of a new building on Route 9, South Broadway, next to the Hibachi Sushi Bar restaurant. The building would be approximately 3,000 square feet.

Pet Lodge is in the process of meeting with Saratoga Springs officials to get approval for construction. Sames said if approved, construction could start in early 2017. He plans on having the facility constructed by the middle of next year.

He said each Pet Lodge location offers state-of-the art, luxury kennels that have monitoring systems so owners can see their dogs while they are away. There is a large yard at each location for dogs to get exercise. Those will also be features of the proposed Saratoga Springs location.

Sames said there are a lot of benefits to placing a dog in a day care or boarding facility.

"It gives the dog socialization, so they aren't just sitting at home by themselves all day. Instead they are playing with other dogs. They also get to exercise," he said.

"It's a great location," said Sames of the South Broadway site. "There's state land on one side, which can't be developed. The location makes it easy for people to come in, drop off and leave. It's very convenient."

Sames said the proposed property is relatively isolated from other buildings, making it perfect for their dog day care and boarding use. "We shouldn't bother anybody."

Pet Lodge started in 2005. Sames and Brown were interested in the pet lodging industry and saw a need in the area.

"We saw trends. It was a growing industry. It was popular out west, but not back east. We wanted to bring this model to Upstate New York," said Sames.

"There's really not many other places around here that are similar to this," said Sames.

Sames is also owner of Sames Media Group, a television advertisement company. Some of his clients include RealtyUSA and Northeastern Fine Jewelry.

For more information about Pet Lodge, including updates on the proposed Saratoga Springs location, visit www.petlodges.com.