This kid has serious speed, and can prove it. 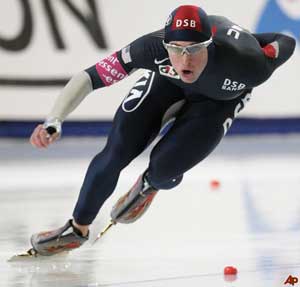 Marsicano will compete in the following events:

Read Marsicano's Journey to the Olympic Games Below:

SARATOGA SPRINGS NY - Trevor Marsicano is now officially a member of the U.S. Olympic Team. Originally from Ballston Spa NY, Marsicano grew up playing hockey; however, had switched over to speedskating about six years ago which was just the right move in fulfilling his goal of some day heading to the Olympics.

The 20-year-old made his way on the U.S. Olympic Speedskating Team for long-track speedskating, but has not always competed in the distance races. He started off on the short-track when he took up speedskating at the age of 13 with the Saratoga Winter Club, and it has been a rollercoaster ride ever since.

In 2004 a serious injury hindered Marsicano's goals, testing his determination. He had collided with another skater during a short-track race, the other racer's skate cutting his thigh to the bone. Training could not continue for several months after that. This was a definite challenge to overcome, though he did not let his injury set him back. In 2007, Marsicano proved his talent and fortitude by winning the 3K race at the World Junior Championships in Austria and taking home the bronze medal overall.

It is only three years later, and Marsicano has been on a long road to the Olympics. He has trained in Salt Lake City and Milwaukee, and had a pinnacle performance in March of 2009 setting the world-record for the 1,000 at a World Cup final in Utah, just an hour before his teammate broke the record again by four-tenths of a second. Like most hurdles in his career, this quick take-over of the world-record didn't stop him. The subsequent weekend, he won a gold medal in the 1,000, silver medal in the 1,500 and bronze in the 5,000. His collection of medals is likely to continue its growth with his trip to Vancouver. After all, he is a favorite to win.

All of his hard work and dedication has paid off. He is now a team member, and also competitor, to some of his speedskating idols. He hopes for nothing more than to make a difference and enjoy his experience - medal or not.

Tune in to watch Marsicano compete in the 2010 Olympics beginning February 12, airing live from Vancouver.

Another local athlete to watch out for is John Napier of Schenectady in bobsledding. Also meet the many athletes from up north, Lake Placid NY - learn more about them here!