Sponsored by The Gideon Putnam

Have you heard the news? On Tuesday, May 1, The Gideon Putnam in Saratoga Springs will reopen after some major renovations! The interior of this local landmark has undergone a complete modern makeover during the past few months, from the lobby to the guest rooms, the restaurant, and more. Not only are they offering several specials in celebration of this occasion, but you can learn all about the exciting changes below. 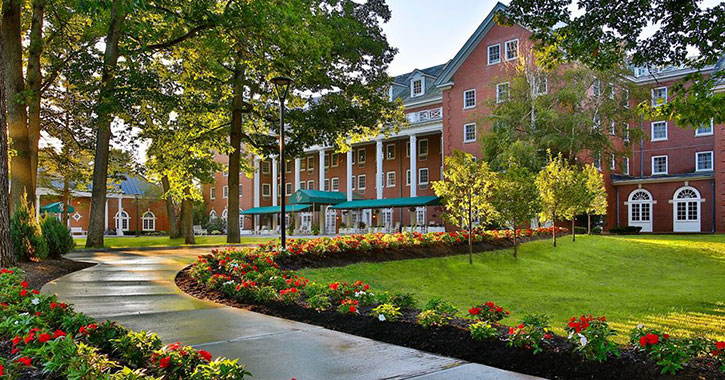 Making the Most of the Opportunity

The Gideon Putnam closed back in mid-January due to a water main break that resulted in basement flooding and damage to some of the operational and electrical systems.

While making the necessary repairs, Delaware North, the acclaimed hospitality and food service company in charge of operating the hotel for the New York State Office of Parks, Recreation and Historic Preservation, decided this was a great opportunity to accelerate the ongoing multimillion-dollar restoration of The Gideon Putnam.

After working hard to fully renovate The Gideon Putnam’s interior, Delaware North is now ready to reveal the transformed hotel.

Step Inside the Transformed Gideon Putnam

From the moment you approach The Gideon Putnam, there has always been a feeling of excitement as the elegant building comes into full view. Built back in 1935 as a wellness retreat for those seeking rest and relief at the nearby spa, the site is widely recognized as the “Jewel of Saratoga,” a historic hotel in Saratoga Spa State Park.

However, while The Gideon Putnam still looks just as impressive as it always has on the outside, you won’t believe the changes that have taken place inside. When you step into the lobby for the first time after their reopening on May 1, you’ll feel a renewed energy in the room as you see the new color scheme, new area carpeting and gleaming floor, and other restorations.

Take a Tour Through the Refreshed Guest Room Corridors 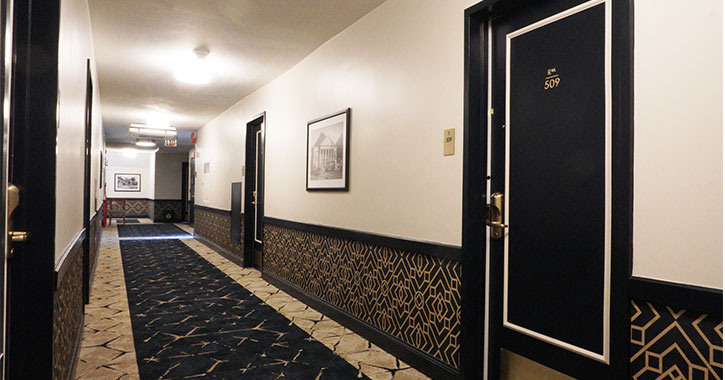 The energetic experience will continue as you move from the lobby into the guest room corridors that have received a similar makeover. The new carpeting, wall coverings and paint, and light fixtures have made the halls much more inviting as guests walk through the hotel.

Indeed, all of these changes have given the guest corridors a much more modern appearance and updated look. The new color scheme (as seen above) now incorporates an Art Deco geometric design that serves as a connection to the hotel’s history, which originally featured a similar design. 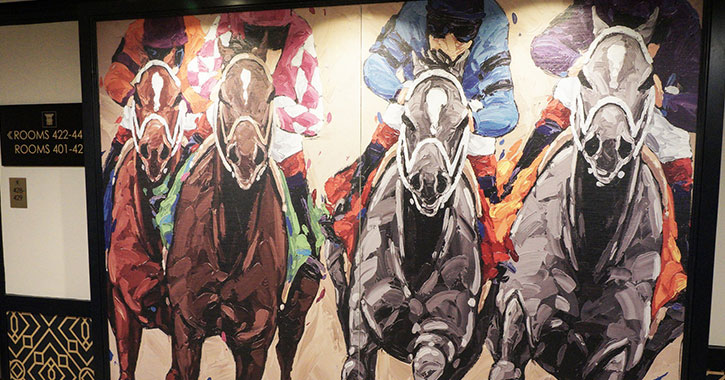 As part of the redesign of the guest room corridors, Delaware North has installed beautiful artworks by local artist Frankie Flores. His amazing pieces reflect what makes Saratoga Springs a special place, such as the historic Saratoga Race Course.

To complement these stunning, hand-painted works of art, there are also historic photographs adorning the corridor walls that each give a glimpse into Saratoga’s storied past. The photos below are just two that you’ll see as you walk around, and there are more located inside the guest rooms. 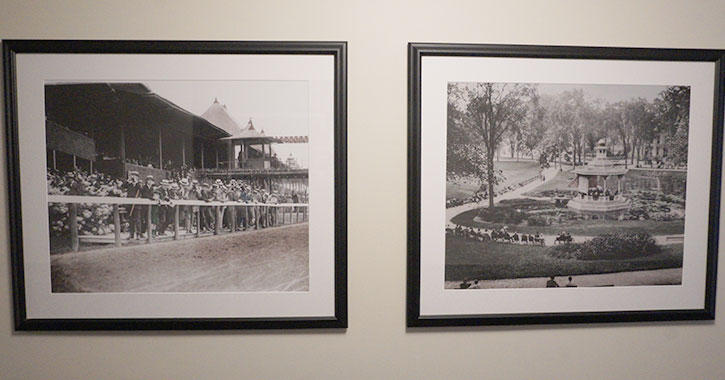 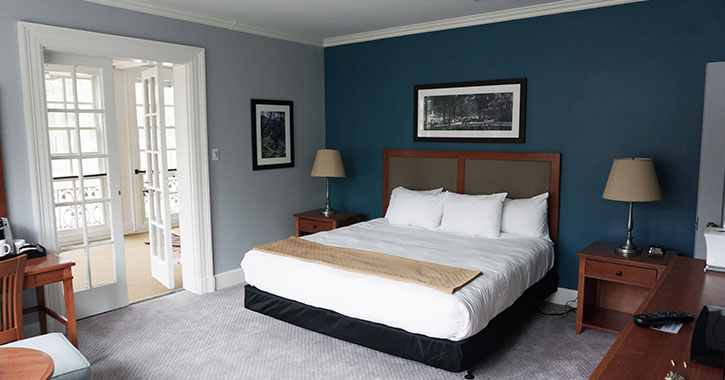 One of the biggest renovations to the hotel are the updated guest rooms, as all 124 rooms have been given a contemporary makeover. Guests will find that their room has new carpeting, blinds, repainted walls, and overall offers a more welcoming and bright atmosphere.

In the coming months, the hotel plans to finish their renovations to the guest room bathrooms and ensure they have new bathtubs and fixtures. 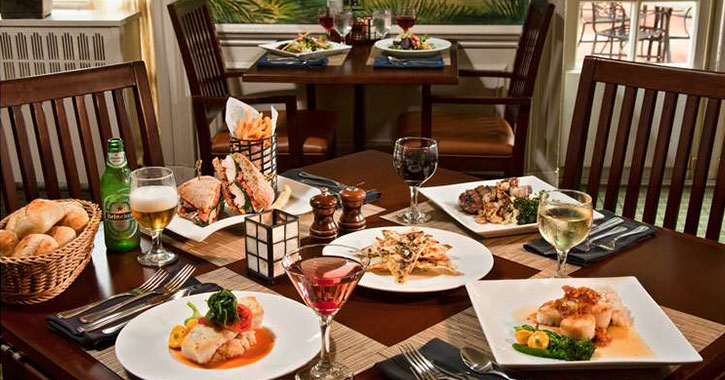 Outside of the guest room area, the hotel’s on-site dining establishment, Putnam’s Restaurant, has been enhanced to provide an even better experience for guests looking to enjoy a memorable meal. The restaurant now has new carpeting, upgraded fixtures, and beautiful murals too!

If you stop by after the hotel reopens, you’ll be excited to learn that the menu has been refreshed as well and includes a number of outstanding and creative dishes prepared by their expert culinary team.

Looking Ahead to the Future 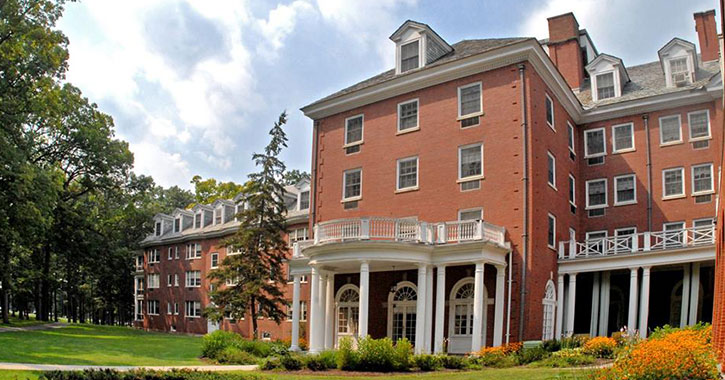 Since 2008, Delaware North has made significant improvements to The Gideon Putnam’s rooms, corridors, meeting spaces, restaurant, lobby, and operational systems, and the aim is to continue to provide exceptional guest experiences year after year.

When asked what makes it such a special place in Saratoga Springs, The Gideon Putnam’s Director of Sales & Marketing, Robert Sgarlata, said it’s a combination of factors that have turned it into a one-of-a-kind hotel. “Unlike other hotels, The Gideon Putnam lets you get away from the city and experience a relaxing atmosphere in a beautiful building.”

New and returning visitors are drawn to the hotel’s unique location in Saratoga Spa State Park where they can enjoy the peaceful setting and participate in wellness activities. When they’re ready to explore the region, the hotel offers a shuttle service to downtown Saratoga.

To celebrate the hotel’s reopening on May 1, The Gideon Putnam is offering a spring stay package to guests that includes up to a 25% discount on rooms, $20 in free play at the Saratoga Casino Hotel, and admission to the nearby Saratoga Automobile Museum or National Museum of Dance and Hall of Fame.

But that’s not all! Since Mother’s Day is right around the corner, The Gideon Putnam will be hosting an extra special brunch this year. On Sunday, May 13, every mom who attends the Mother’s Day Brunch will receive a 10% off voucher for services at Roosevelt Baths & Spa (good any Monday through Thursday), and they will be entered in a drawing for a chance to win a Total Body Bliss spa package.

Excited to see the newly renovated Gideon Putnam? Learn more and book your stay at the hotel today >>