For those of you who don't know, a little bit of down-state flavor was brought up-state when Glenn and Mary Ann Guerriero moved to Saratoga, and brought Brooklyn Attitude with them, opening the salon in 2003. They are not just hair stylists; they are creators of their profession. They are unique in their style, attitude and talent. All you have to do to know that is look in their salon on Ballston Avenue in Saratoga Springs. If these walls could talk, they would have a lot to say.

Awards, photographs, certificates, magazine covers and articles are all proudly displayed showing the road the Guerriero's have traveled to get to where they are today.

Brooklyn Attitude has been recognized for being a top salon both locally and nationally. In 2010, the Saratogian's People's Choice ranked them "Best Hair Salon" of the year; they were ranked in the top 100 salons in the country by "Salon City" 3 years in a row (the first New York salon outside of New York City to be recognized in the top 100 list). Being recognized nationally and having clients who travel to get their hair cut at Brooklyn Attitude are their proudest moments of the Guerriero's career, as they should be.

Glenn's goals are to be "leaders in the profession and proactive in the community." Brooklyn Attitude has worked with many non-profits in the area, including Adirondack Save-A-Stray, Women's Shelters of Saratoga, and SPAC. They have even sponsored fund raisers for Hurricane Katrina and donated clean cut hair for the Gulf Oil Spill. Glenn finds it important to bring both professionalism and a consumer aspect to their business. Glenn is even trying to get a state legislation passed to create a training program, which will produce local jobs in the salon industry. 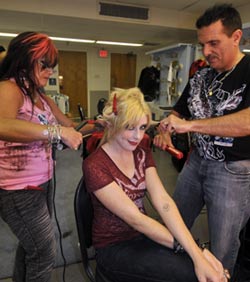 Another top goal is to bring a national "buzz" to Saratoga. They have had a good start in "putting Saratoga on the map for hair," and they continue to travel around the country working with top stylists, proudly stating that they are from Saratoga Springs.

They have been asked to work with over 150 bands all over the world and have worked with many celebrity clients, including Motley Crew and Godsmack at SPAC for Crue Fest. They were even just asked to do a show with Eminem, Blink 182 and Kiss.

"People ask us 'why travel?' It is to create a buzz and bring back the buzz, attention, and ideas to the area. We want to brand Saratoga along with the salon," Glenn said.

They have trained with top stylists in the world, and have learned from them taking their philosophies and techniques, then making them their own. "You have to take a chance and challenge yourself. Step outside the box," Glenn said.

They appreciate the power of branding and creating a niche. Being unique and having a different approach than other salons is important to the Guerriero's. "I was told, 'Fads fade, so don't become a cookie cutter," Glenn said, and they live true to this advice.

Even in the midst of her career, Mary Ann continues her certifications and to set goals for herself. She recently became certified in permanent make-up, and is the only stylist in the 518 area-code to be certified to do Cinderella hair extensions. She is committed to the profession. They have a consultation before they meet with every client, looking at their face, eyes, skin tone and lifestyle all to determine a look a personalize the cut. Mary Ann says her secret is all about the technique and her hair cuts last months because of it.

So what does the future hold for Brooklyn Attitude? Just continue to do what they do best and remain leaders in their community. There was talk of a Brooklyn Attitude product line, as well!

"We are more than just a salon. We create stories, and work with other people and other groups." Brooklyn Attitude is full of energy, it is like a home, and that is how they want people to feel when they walk in. "You never know who is going to walk through your door," Glenn said, "You never know what tomorrow will bring."