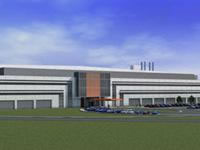 Malta, NY -- Construction of the GlobalFoundries $4.2 billion semiconductor facility is now underway on 223 acres of land at the Luther Forest Technology Campus in Malta. GlobalFoundries is a partnership of Advanced Micro Devices, Inc. (AMD) and two Abu Dhabi investment funds, which will own and operate the fabrication plant upon its completion.

In July 2009, Rick Whitney, president and CEO of the US unit of M+W Zander, visited Malta and gave a detailed presentation on what goes into building a chip fabrication plant.

The entire Fab 2 plant will be built upon a solid mat of concrete, three feet thick, to stabalize the building and control vibrations. Whitney explained that 75-80% of the entire project investment would be used for process tools, which are pieces of manufacturing equipment that are expected to take up about 200,000 square feet within the plant.

These production tools must operate within sterile "cleanrooms" - which Whitney speculated were 100 to 1,000 times cleaner than an operating room.

Job creation through the length of the project is expected to be a great benefit to the local labor force. Jobs will include contract labor, maintenance services, landscaping, security and various other labor needs, as well as tech-trained personnel and management staff to run the facility.

"We believe we will totally consume the local labor force in the region," Whitney said.

In addition to creating jobs, the building project is expected to boost real estate sales in the region, as remote laborers move into the area. The majority of the workforce is, however, expected to be regional labor.

With an expected completion date of 2 years, Fab 2 will be located about 15 miles north of Albany NY in Malta. Businesses who want more information on getting involved in the GlobalFoundries Chip Fab project should contact .

Stay up to date on Globalfoundries progress by clicking here!

<< Back to Saratoga News