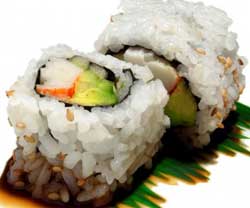 Mino's Japanese Bistro reopened on Maple Avenue in Saratoga Springs NY after the restaurant was closed in January by tax authorities. The restaurant had shown intentions to open Mino's on Front Street in Ballston Spa, but there are no signs of the restaurant moving.

Mino's is well-known in the Saratoga Springs area for it's sushi creations, prepared by chef-owner Mino Kamugauch. When it first opened its doors in the Spa City in, Mino's was originally located on Caroline Street. A few years later, the restaurant closed to move to Central Ave in Colonie. But the popular sushi restaurant could not stay away from Saratoga for long! Mino's moved back to Saratoga Springs in summer 2007 to a new location on Maple Avenue, where they have operated since (with the exception of this recent closure).

What's next for Mino's? The restaurant had shown intentions to move to Front Street in Ballston Spa, but there are no signs of the restaurant making this move. Guess we'll just have to wait and see if they will stay in Saratoga or move elsewhere!

In the mood for dinner out tonight? Grab a bite to eat at Mino's, or try another one of the many great Saratoga restaurants!