Visit Saratoga.com For Everything Saratoga
Enter Giveaways Advertise
Home  »  Events  »  Everything You Need to Know for Travers Weekend in Saratoga

It’s here, finally! Saratoga has been buzzing all week in anticipation of one of the biggest events of the year: The Travers!

This year is definitely special in comparison to past years, with Triple Crown Winner, American Pharoah, racing in the 146th running of the Travers. With such exciting news comes a lot of changes to take into consideration when heading to the track this weekend! Luckily for you, we’ve rounded up everything from fantastic celebrations to new security protocols you should be aware of.
Whether this is your first time attending or you’re a seasoned vet — take a look at our Travers roundup: 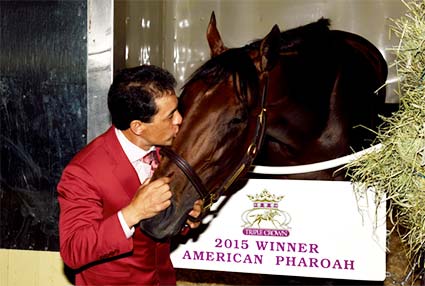 The annual Travers Draw took place on Tuesday on the patio of Druthers. American Pharoah drew the second post and made the 1-5 first choice in the morning line odds. The rest of the 10-horse field is Keen Ice (12-1) in post seven, Upstart (15-1) on the rail, Smart Transition (20-1) in post 10, Frammento (30-1) in post five, Tale of Verve (30-1) in post eight, Mid Ocean (50-1) in post three and King of New York (50-1) in post nine.
Travers 1864 Restaurant Week
If you haven’t already been out for Travers 1864 Restaurant Week, Thursday, August 27th is your last chance! Enjoy a prix-fixe three-course meal for the incredible cost of $18.64, the year of the inaugural running of the Travers, the oldest major stakes race in the country for three-year-olds. Take a look at the participating restaurants.
The 2015 Travers Celebration
The Travers Celebration will be held in support of the Backstretch Employee Service Team, Saratoga WarHorse and the Times Union Hope Fund at Saratoga National Golf Course on Thursday, August 27th at 7:00 PM. There will be outdoor cocktails, a seated dinner catered by Mazzone Hospitality and live entertainment from the Times Square Orchestra.
The 17th Annual Travers Wine Tasting
Head to one of Saratoga’s most anticipated charity events of the summer season. The 17th Annual Travers Wine Tasting will be held at the Fasig-Tipton on Friday, August 28th. The gala will feature wine and food tastings, live entertainment, live and silent auctions and more! Ring in Travers Day in style and get your tickets today.
Dairy Haus Free Keen Ice Cream Promotion
The Dairy Haus ice cream shop at 476 Maple Avenue in Saratoga Springs will offer children 12 and under free “Keen Ice Cream” cones in honor of Keen Ice’s participation in the Travers. The custom made green and yellow-swirled cones with green and yellow sprinkles (to reflect the silks colors of Keen Ice’s ownership group) will be available while supplies last.
Travers Festival
There’s a wide variety of events happening at the historic Saratoga Race Course this week leading into Travers Weekend! Take a look at the line-up.
Travel Delays
Fans are strongly advised to plan ahead and build significant time into their travel to and from Saratoga Race Course on Saturday. Gates will open at 7:00 AM for ticketed patrons, with a first race post time of 11:45 AM. The Travers will post at 5:46 PM and will be broadcast on NBC as part of a special two-hour live broadcast beginning at 4:00 PM.
Similar to any other large sporting event, delays should be anticipated when entering and exiting the property. Fans are encouraged to arrive to the track early and stay late. The Fourstardave Sports Bar, as well as The Post, will feature live music until 9:00 PM.
Preferred parking is available for $15, trackside for $20 and valet for $50 on Travers Day. Free parking is available on a first-come, first-served basis in the Yaddo and Flatland lots. A free shuttle service is available for those who park in either of those parking lots.
Travers is Completely Sold Out
Fans without tickets should not travel to Saratoga Race Course on Saturday, August 29th. Tickets are completely sold out, and none will be available at the gate. Clubhouse and grandstand season passes are valid and will be accepted.
Patrons with previously confirmed dining reservations are encouraged to purchase their Travers Day admission in advance of August 29 by visiting the NYRA Box Office at the track. NYRA officials will continue to contact each reservation holder to facilitate payments and arrange for advance ticket pick-ups.
Don’t have a ticket but still want to catch the race? Check out this list of viewing parties taking place in Saratoga!
New Security Rules
All track goers are subject to enhanced magnetic screening upon entering Saratoga Race Course. Those attempting to enter with prohibited items will be asked to throw them out or put them back in their car.
Re-entry on Travers Day will be limited to only the Clubhouse gate on Wright Street, off Nelson Avenue.
No coolers larger than 12-by-18 inches will be allowed on the trackside apron or Top of the Stretch. No coolers of any kind are permitted in the building or Clubhouse. Glass containers of any kind are prohibited. Breakfast on the Clubhouse porch and backstretch tram tours will not be available on Travers Day.
NYRA is also coordinating with law enforcement professionals, transportation planners, and first responders at all levels of government. All are playing a role in the development of traffic management and operational contingency plans.
Happy Travers, Saratoga!
Editors Note: Information about the Dairy Haus Keen Ice Cream promotion was added after the article was originally published.