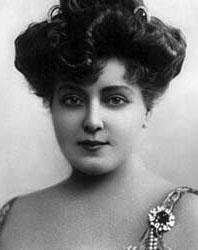 Actress and opera star Lillian Russell was among the rich and famous who flocked to Saratoga in the late 19th century.

Russell was born Helen Louise Leonard in Iowa in 1861 and was raised in Chicago. When she was 16 or 17, Russell moved to New York City with her mother and landed her first stage role a year or two later. Comic opera was her speciality, and as she rose in popularity, she travelled all over the world performing in operettas and theatre.

Russell was first seen in Saratoga in the 1880s and returned to the Spa City quite often with companion Diamond Jim Brady. She typically caused quite a scene, riding down Broadway on her gold-plated bicycle with handlebars that bore a monogram encrusted in jewels.

She was well known for her amazing stage presence and beautiful singing voice, but Russell had many other passions off the stage. She was an advocate of women's suffrage and gender equality, and donated money to causes close to her heart.

Lillian's Restaurant - a downtown Saratoga mainstay for more than four decades until its closing in 2015 - was named in her honor.