Home / Events / Military Appreciation Day
PLEASE NOTE:
The information you are viewing for this event is from Thursday, Aug 25, 2022.
Please check back for updates.

Saratoga Race Course will pay tribute to active military members and veterans in appreciation of their sacrifice and service to our nation. The West Point Parachute Team, Color Guard and...

All veterans and active-duty military members will receive free grandstand admission with proper identification. Gates open at 11 a.m. and first post is at 1:05 p.m.

NYRA will pay tribute to its own service member and veteran employees with a special ceremony in the winner's circle following the National Anthem, which will be performed by SSG Francisco Aisporna from the West Point Band at 11:30 a.m.

Veterans will be recognized during the third race of the day, including two members of the Schenectady Marine Corps League: 83-year-old Bob Becker, who served from 1960 to 1968 and formed the Electric City Detachment #222 of the Marine Corps League in 1973; and 94-year-old Al Shemo, who served from 1945 to 1951 in World War II and the Korean War. Prior to the third race, Mr. Shemo will ring the bell seven times at 17 minutes to post to signify when the horses have entered the paddock.

The fifth race of the day will honor active-duty members of the New York military services, including Naval Support Activity (NSA) Saratoga Springs and the National Guard. Prior to the fifth race, National Guard service members from New York will announce the ceremonial call for “Riders Up” in the Saratoga paddock.

One of the many highlights of Military Appreciation Day will be the West Point Parachute Team. Members of the team will perform a pair of jumps onto the infield at 11:45 a.m. and, then again, at approximately 4:40 p.m.

Operation Adopt A Soldier will collect monetary donations at the Community Outreach Booth. The organization supports U.S. soldiers worldwide by sending care packages, gifts and letters to provide them with a sense of home while stationed overseas.

The National Guard and NSA Fleet and Family Support Center (FFSC) will each have a presence at the Jockey Silks Porch. The FFSC at NSA Saratoga Springs provides support services to members of the naval forces within the Capital Region. 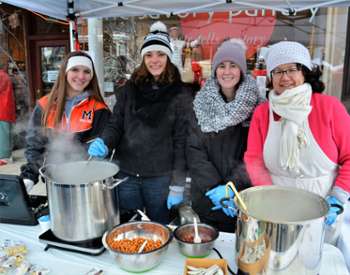