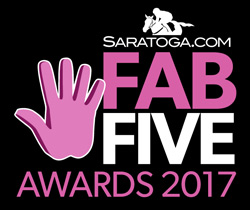 Have a favorite restaurant, hotel, or attraction in Saratoga? Make your voice heard, and show those establishments the love they deserve!

Voting for the 2017 Fab Five Awards is now closed.

The Fab Five Awards are sponsored by Saratoga.com

NOTE: Each survey allows you to vote once. When compiling the final vote, log files will be used to discard duplicative votes.