Home / Things to Do / Business Success in Washington County

Finding Business Success in the Historic Countryside of Washington County

The historic countryside near Saratoga Springs isn't just home to miles of rolling hills and striking landscapes. Throughout the region, the small business community has continued to grow with new restaurants, breweries, shops, and more opening up each year. If you've ever wanted to learn more about how these local businesses got their start, then take a look at these stories of success from Washington County.

Who doesn’t love pizza made with fresh, high-quality ingredients? At Stumpy’s Pizzeria in Fort Edward, you can order a wide range of delicious specialty pizzas, Italian entrees, and more.

Stumpy’s was established in February 2017, and they officially opened their doors on August 4, 2017 - the birthday of owner Amy Stumvoll! Born and raised in the Village of Homer in Central NY, Stumvoll has loved pizza and the craft of pizza making from an early age. She grew up around her best friend’s family’s pizzeria, and then began working in a pizzeria starting in her late teens.

Almost instantly, she was hooked. In the following years, Stumvoll learned the art of pizza making and rose through the ranks from delivery driver to pizza maker and eventually manager. She worked at pizzerias throughout NY State, and then in 2006, moved to Saratoga Springs for a position at Caputo’s Pizzeria.

As she continued to hone her skills, an opportunity arose when Stumvoll found out that a building had become available in her community of Fort Edward. This was a chance for her to not only open her own pizzeria, but also to help support the village’s growing business community.

Since then, Stumpy’s has acquired a very loyal customer base around the area. Although it was a rollercoaster ride in getting the business started, Stumvoll looks forward to her restaurant evolving while staying true to their core values. 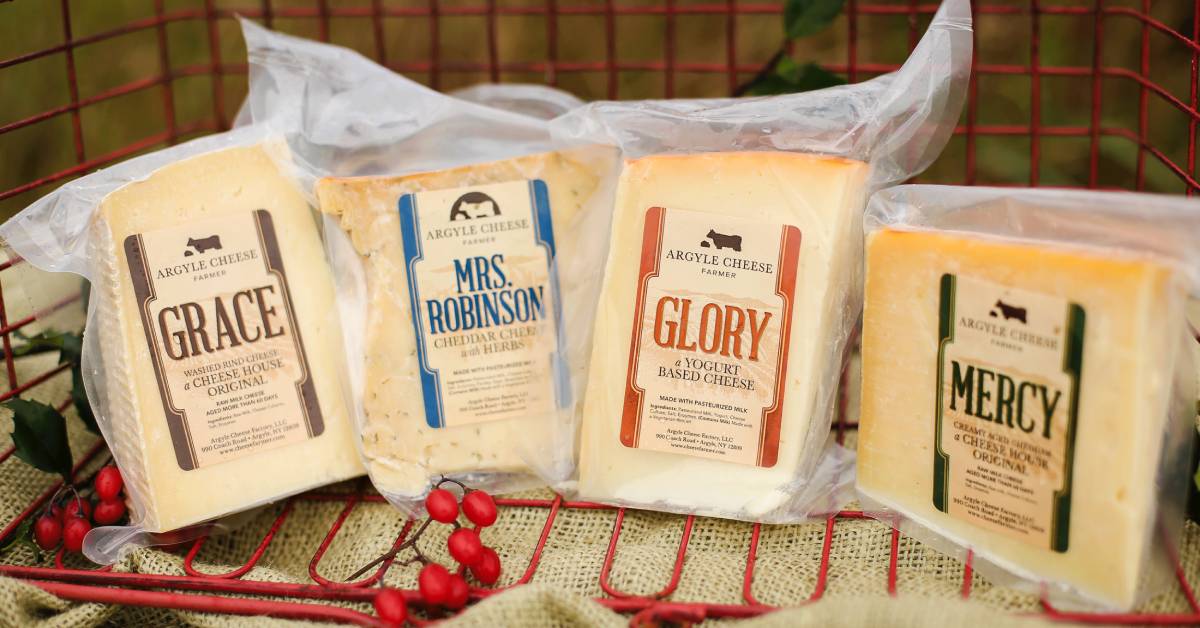 If you're a fan of artisan cheese in the Saratoga area, then you've likely heard about Argyle Cheese Farmer. Commonly seen at local farmers markets, Argyle Cheese Farmer is a cheese-making business that is owned and operated by husband and wife team Dave and Marge Randles.

Established in 2007, the Randles' cheese farm facility is located in Argyle on a 225-acre family farmstead that dates back to the 1860s. Dave and Marge decided to move into the cheese-making business as a way to help the farm achieve a greater and more controlled rate of return. They use milk that is produced from the farmstead's herd of cows to make high-quality cheese, yogurt, and buttermilk.

Since opening, Argyle Cheese Farmer has continued to grow and now offers over 12 different cheeses, including the fresh cheese Quark and the 18 month aged Amazing Grace. In 2020, Dave and Marge opened a second location in Hudson Falls called the Argyle Cheese Farmer Store & Bakery. This store makes it even easier for customers to purchase Argyle Cheese Farmer products and other items, such as beef, pork, baked goods, and take-and-bake pizzas. You can also step inside the store's observation room to watch cheese and yogurt being made.

Craving some delicious cheese? Head over to Argyle Cheese Farmer and see what they have to offer. 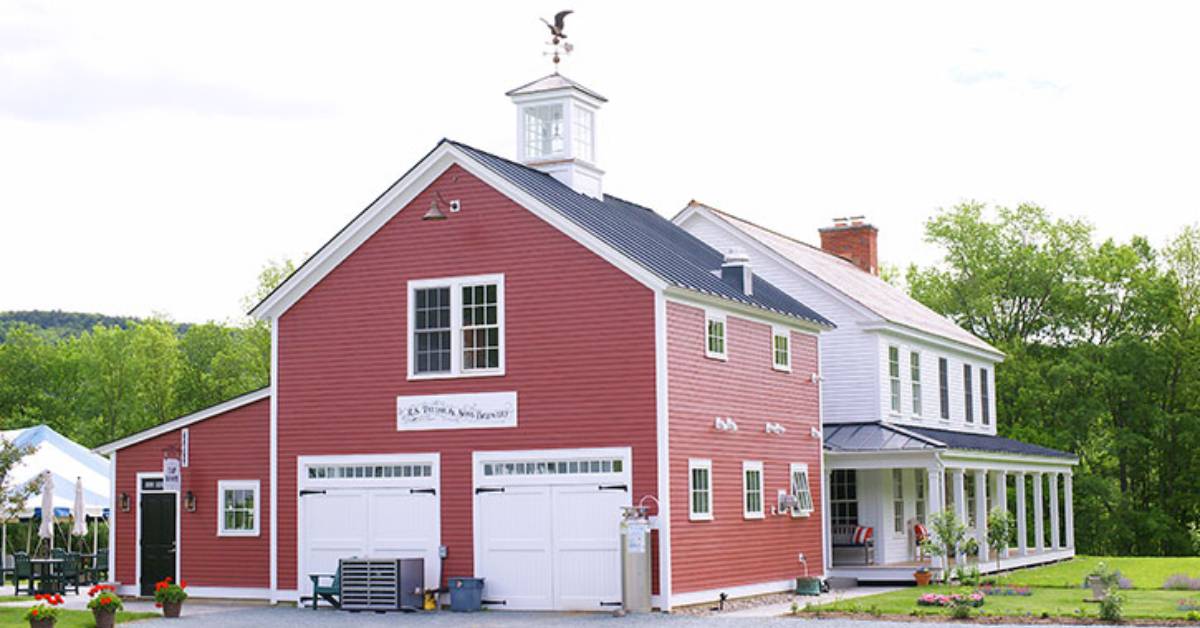 For farm-fresh beer brewed right in Washington County, R.S. Taylor & Sons Brewery is an excellent choice. Featuring a selection of British-style ales, the story behind this business is a tale of two individuals who left behind their suburban lives to open a microbrewery in the countryside.

Owners Kelley and Richard Taylor lived in McKownville for 25+ years after originally meeting in college. Kelley grew up in Montgomery County, and Richard grew up in Albany County.

For business reasons, the couple lived in the suburbs of Guilderland for a while, but they always dreamed of living in the country. When a small farm property became available in Salem (near Hebron), the Taylors purchased it, hoping to make it a place where they could retire in the future. However, at the time, they didn’t know this would become the home of their new farm brewery.

The idea surfaced when their older son began homebrewing around 2010, and Richard Taylor acquired an interest in the craft. The Taylors then started growing hops at the farm, which led to some delicious brews. When NY State passed the Farm Brewery bill, they decided this was an amazing opportunity to live in the country and establish a farm brewery.

From there, the Taylors dedicated their lives and spent many hours to make R.S. Taylor & Sons the most beautiful farm brewery in America. With the support of a core group of local residents, this microbrewery has become well known across the entire region. Through it all, they have been unwavering in their commitment to bringing brewing back to its agricultural roots right here in Washington County! 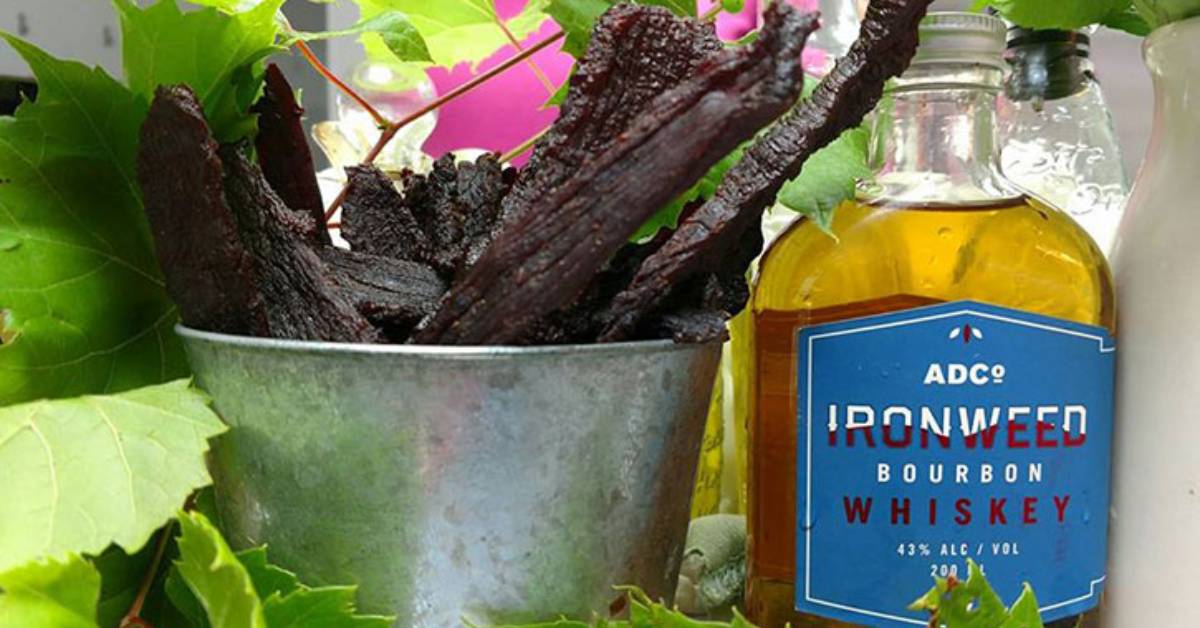 From teriyaki to mesquite and hickory to sriracha, the selection of mouthwatering beef jerky at Muddy Trail Jerky Co. is second to none. Based in Washington County, this family-owned business was established back in 2015.

The story of Muddy Trail Jerky Co. begins with the owners, Mary and Rene Lussier. Mary came up with the idea to start making homemade beef jerky for her husband, and she experimented with recipes and invented her own. After sharing with family and friends and realizing how much they enjoyed it, Mary decided to leave her career in retail and move into the jerky making business with her husband.

The first step was to purchase their dream farmhouse and farm property in Salem and buy some cows. After they established the business in 2015, the next step was to make the jerky and sell it locally, such as at farmers markets and craft fairs.

A year later in 2016, the company expanded and Mary and Rene Lussier purchased a small shop in Granville where they would be able to sell jerky and other products, as well as operate a commercial kitchen. Most recently, in early 2021, Muddy Trail Jerky Co. moved their shop to a new location in Greenwich where they continue to sell an ever-growing variety of beef jerky, snack sticks, spices, dip mixes, and more. 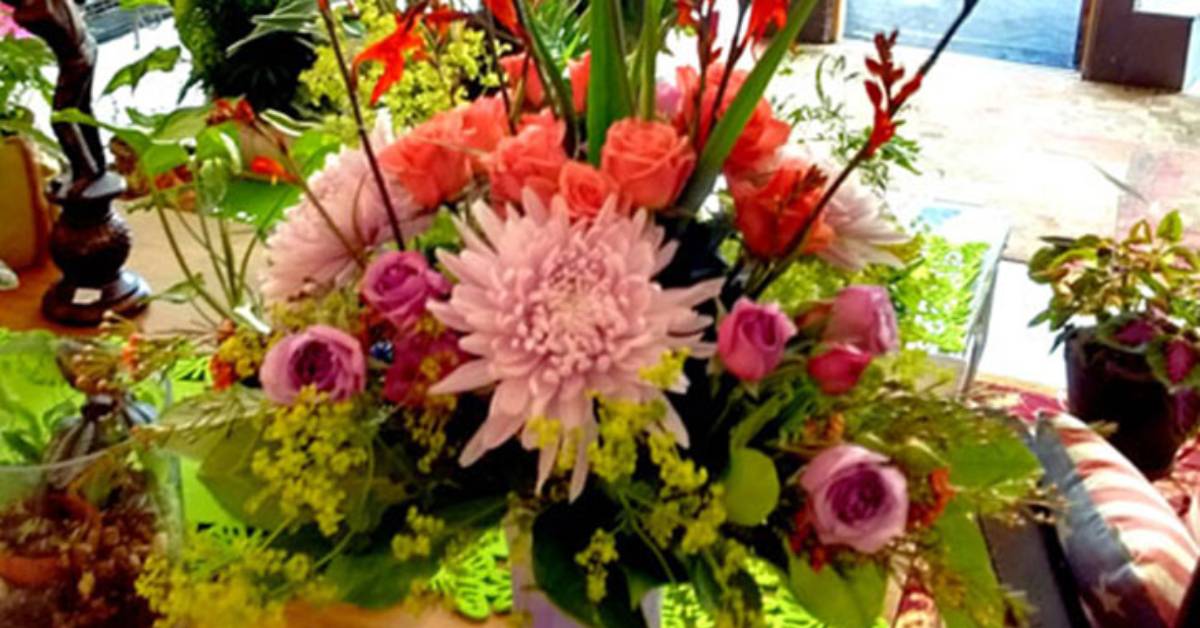 Whether you’re looking for annuals, perennials, herbs, baskets, or beautiful flower arrangements for a special occasion, Laura’s Garden has exactly what you need. This homegrown Salem business features a retail flower shop nestled directly on Main Street and greenhouses that are open seasonally at a separate location.

In the mid-2000s, Salem resident Laura Dunham and her husband began to wonder what “retirement” would be like for them once she had decided to leave her job. After they formed an initial plan to build greenhouses on their property and sell flowers, Laura began sowing the seeds of Laura’s Garden right after finishing her last day of work.

The husband and wife team built their greenhouse business from the ground up with help from family and friends when needed. Although they faced some difficulties, Laura’s Garden was established in 2008, and after just three years, the business took off.

A key part of their early success was the support of the local Salem community, which really helped them develop their flower enterprise. When they received an offer in 2012 to lease a storefront on Main Street in Salem, it was a no brainer for them to accept and open a second location - The Flower Shop @ Laura’s Garden.

Compared to when they first started out, Laura and her husband now know so much more about managing the business, and are always checking out new plants to grow and gifts to carry.

The Inn on Lake Champlain: Stay at a Historic Victorian Farmhouse

Featuring majestic views of the lake and surrounding countryside, The Inn on Lake Champlain in Putnam Station is the perfect B&B for a private getaway. The historic farmhouse is owned and operated by Karl and Lani Ohly, who purchased the property in 2016.

Although they originally lived in Ohio, Karl and Lani Ohly finally made the decision to move to the Adirondacks after purchasing The Inn on Lake Champlain, which was up for sale in 2016. From 2016-17, the couple focused on restoring the property and relocating their livestock and farm equipment from Ohio to Putnam Station.

In addition, the Ohlys reopened the c.1870 Victorian farmhouse as a B&B that offers guests a retreat from the modern world. From the moment you step inside, you'll be immersed in timeless elegance, from the original woodwork to the lovely antiques and cozy bedrooms.

Guests can also make the most of their country getaway with a scrumptious farm-fresh breakfast, afternoon tea, on-site horse riding, and so much more. It's truly a one-of-a-kind experience, and the Ohlys plan to continue honoring the legacy and preservation of this farm property.

Lavenlair Farm: Explore the Fields & Pick Your Own Lavender 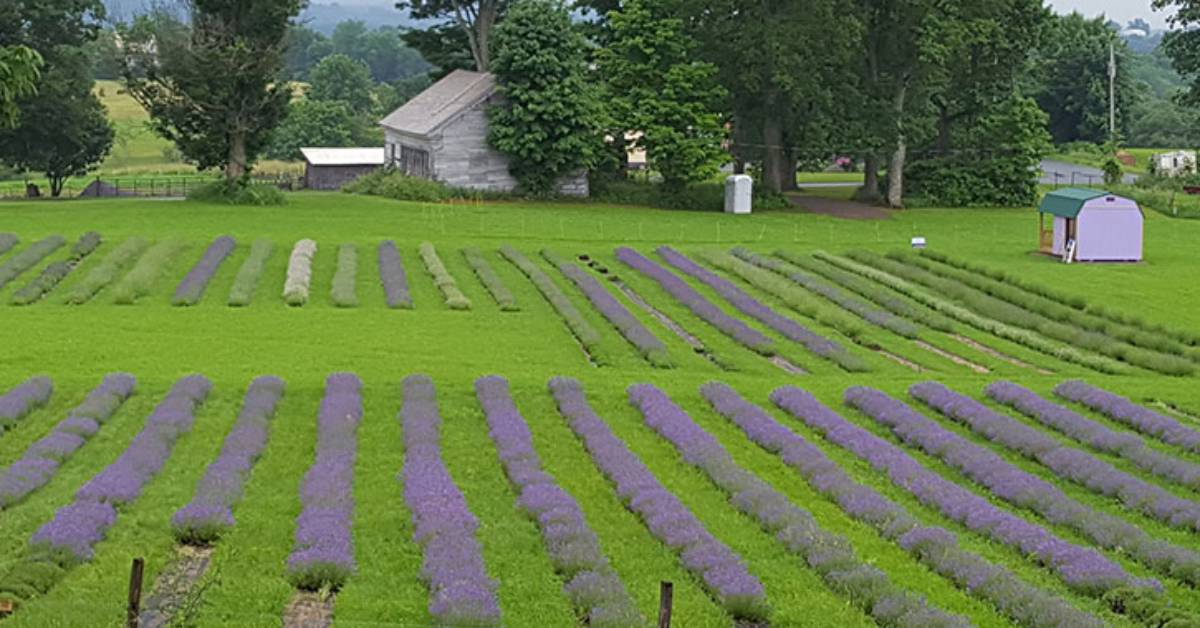 Editor's Note (5/17/2021): The farm is currently closed to all visitors due to the COVID-19 pandemic. Please order online for all products.

If you'd like to wash away the stress of everyday life for a while, then check out Lavenlair Farm in Whitehall. Owned and operated by David and Diane Allen, this lavender farm is a place where visitors can experience a meditative walk in a Laverinth (lavender labyrinth), pick lavender, and shop for unique products.

So how did the Allens choose lavender as their main crop? It all began when the two first met on greensingles.com and discussed a shared desire to live in a stone cottage in a meadow. After marrying a year later and starting a life together in New Jersey, this dream stayed with them through the years.

One day, while driving through the North Country, David took Deweys Bridge Road and spotted a stone house for sale; six months later in March of 2013, the couple purchased their new home. The Allens then made plans to start farming on the property, and make a living while making a life worth living.

At first, they tried planting everything from annuals and perennials to fruits and Christmas trees. During one trip to a plant nursery, the owner mentioned there was a lavender plant they were throwing away. With encouragement from Diane, David climbed into the dumpster to retrieve the lone lavender, and then they planted it back at the farm. As it turned out, deer would soon eat all their trees but leave the lavender, which encouraged them to plant more.

After deciding on lavender, Lavenlair Farm began to grow and take shape. Thanks to help from family, friends, neighbors, and the community, the Allens cleaned up the property, added green utilities to the renovated stone house, and planted a lot of lavender. Today, the farm is home to over 4,000 lavender plants, and David and Diane are busy nearly every hour of every day with new products, projects, plantings, and more.

Want to see more of what these local businesses offer? Plan a visit to them today!