A longtime landmark, the 24-hour Saratoga Diner on South Broadway recently closed, without warning or word about reasons why. 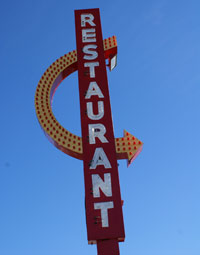 Many locals were disappointed to hear the news. Saratoga.com’s own Ashley Dingeman, author of “Eat Your Heart Out”, said the diner had been around as long as she could remember.

Without an official reason and no talk about reopening, we can only speculate why the restaurant with the recognizable giant red pillar and colt statue had to close.

Perhaps the best idea is offered by Todd Shimkus, the CEO of the Saratoga Springs Chamber of Commerce.

“Diners, at one point, were incredibly popular,” Shimkus explains. “But times have changed.”

He’s right – in the last quarter-century alone, Saratoga Springs has grown and evolved into a vibrantly different community, with a new market and different expectations.

Personally, I love diners. They’re great for winding down after night on the town, for those irresistible late-night cravings, or for when your dinner date is incurably tardy. However, not everyone enjoys these features.

As Shimkus said, while there are still a few of us who enjoy places like Saratoga Diner, we have become a niche market.

This closing of comes in the wake of other businesses leaving South Broadway, though these closings all had separate reasons and are not part of a trend.

On the plus side, with all of these vacancies opening up on South Broadway, there is an opportunity for new businesses to move into this key point of access to the city.

Saratoga hasn’t failed to notice – according to Shimkus, a committee is currently forming to look at the area to see what can be done to bring new business to that corner of the Spa City.

While we will miss the old Saratoga Diner, I’m excited to see what new enterprisse will spring up in its place. And perhaps they’ll keep the little horse statue on the building, too.