Looking to beat the busy Saratoga Race Course crowds on Travers Day? You can watch the most anticipated race of the season at the following establishments that will all be airing the Travers Stakes in the Saratoga Springs, NY area.

Note: It is highly recommended to call ahead of time and make a reservation. 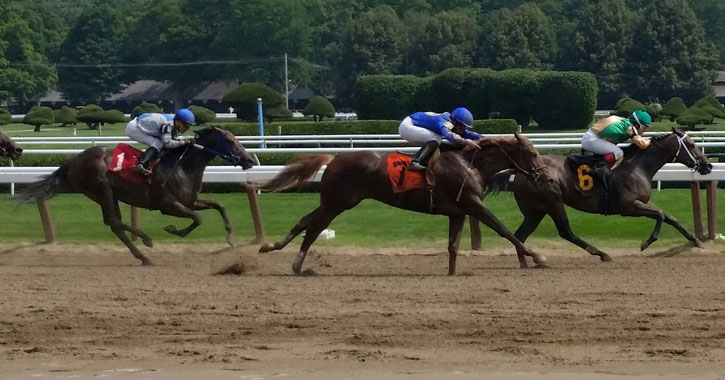 The Saratoga Casino Hotel will be airing the Travers upstairs in their mezzanine area.

Enjoy perfectly prepared steak or fresh seafood while watching the race at Prime.

Watch the Travers at one of the oldest continuously run restaurants in downtown Saratoga.

If you want a classic sports bar atmosphere for the Travers, then head to Peabody's!

The Brook Tavern on Union Avenue will be airing the races throughout Travers Day.

This upscale tavern has five floors of fun including a private rooftop deck. Come watch the Travers on one of their TVs!

You'll find great food and icy cold beer at The Barrelhouse for your Travers viewing.

Beat the crowds not just at the Race Course, but in all of Saratoga, by enjoying the Travers at the Recovery Sports Grill in Malta.

Wheatfields Saratoga is not only airing the Travers, but they will also have drink specials, complimentary apps, raffles, and more at a full Travers party.

Watch the Travers at this "unfussy" sports tavern.

Have great barbecue and drinks while watching the Travers at The Ice House.

Get classic pub food while watching the race at Trotters.

Come and watch the Travers at Clancy's Tavern on Caroline Street!

Head to The Adelphi Hotel's Morrissey's Lounge on Saturday to watch a live streaming of the Travers Stakes. Then, join them in the Wine & Beer Garden from 7:00pm-11:00pm for live music, BBQ, and more.

Read up on Travers Day before the race »

« Back to the Race Track Guide