Yes, you read that correctly. Saratoga, a name associated with the beautiful city known for health, history and horses, is also the name of a Spanish heavy metal band!

That’s right! Saratoga was formed in Spain in 1992 by Niko Del Hierro and Jero Ramiro. The duo spent three years getting ready for the release of their debut album, also titled Saratoga, which came out in 1995. Although its initial release garnered a tepid response, the album is now known as a “Euro-metal classic.” 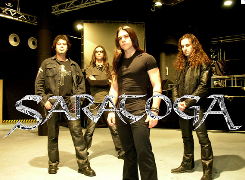 The band released an album of covers, “Tributo,” after “Saratoga,” but it wasn’t until their third album, “Mi Cuidad,” that they became a name in la casa. After that album, Saratoga was one of the few heavy metal bands earning a spot on European pop charts in the nineties.

Saratoga’s fan base is mostly European and Japanese, especially after their English release, “Heaven’s Gate,” failed to bring them more mainstream attention.

Smaller successes didn’t stop the band from making a biographical DVD of their stardom though. Entitled “1992-2004” the movie was a gold selling hit.

Known in the past as one of Madrid’s premier heavy metal acts, the band hasn’t released an album since 2007. The band is still together though, ostensibly working on another album. Who knows, maybe their next album will be a tribute to Saratoga Springs!