Visit Saratoga.com For Everything Saratoga
Enter Giveaways Advertise
Home  »  Fun Stuff  »  Caffe Lena’s Renovations Are Underway; Where Can You Find Its Summer Shows?

Caffe Lena, America’s longest continuously operating folk music venue, will be undergoing major renovations from June 10 through August 27. Instead of shutting down for the summer season, Caffe Lena will feature a full schedule of concerts at a temporary venue in downtown Saratoga Springs! 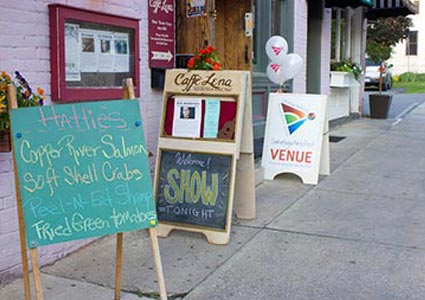 To accommodate its concerts, Caffe Lena has partnered with Bonacio Construction, the developer in charge of Lena’s renovations. The construction company recently opened a renovated luxury adult living community called The Grove at Neumann. Located at 233 Lake Ave. in Saratoga Springs, the rental property will host Caffe Lena’s concerts for the time being.

Stanley McGaughey, the chair of Caffe Lena’s board of directors, was quoted in The Saratogian, “The Grove is a stunning, beautiful spot and we are so excited to have the opportunity to share it with our members and fans.”
On most Fridays and Saturdays, Caffe Lena’s concerts will occur in The Grove’s Great Room, otherwise known as the community living room. To retain the feel of Caffe Lena, the performance venue will bring its recognizable chairs and tables to the new place. In addition, Panza’s Restaurant will provide catered fare during the concerts, including Lena’s always popular chocolate chip cookies.
While The Grove hosts Caffe Lena’s concerts, the Phila Street venue will be renovated. According to The Saratogian, the plan is for Caffe Lena to share an elevator with a new corner building at Phila and Henry Streets. Furthermore, the listening room will be expanded to seat an extra 25 patrons. Some of the other renovations include a modern kitchen and amenities, better artist accommodations, sightlines, sound, and a new administrative space.
Although this is the first time Caffe Lena has seen major renovations, when it reopens later in the year, the historic venue will be ready to host even more artists for years to come.
Source: