By: Pamela A. Gibbs
Contributing Writer

WILTON – Asked if she could be described as a woman with a lot of junk in her trunk, sculptor miChelle Vara hooted with delight.

“You could definitely arrive at that conclusion,” said miChelle, her laughter continuing. “But then again, the stuff really isn’t junk to me.”

The “stuff” in her trunk, and all around the grounds of her Wilton studio, includes antique metal tools, pipes and chains, bicycles, long-retired farm equipment, old car bumpers, a huge assortment of keys, and hundreds of other interesting metal objects rescued from a slow death-by-rust and now slated for new relevance in one of the artist’s sculptures. 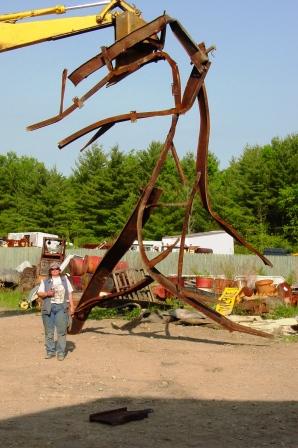 Many of her pieces, some of which weigh several tons, have traveled around the country on loan and for exhibitions. “One Bucking Thing After Another,” an 11-foot-tall creation of a horse, was exhibited at the Shore Institute of Contemporary Arts in Long Branch, NJ, before finding its way back to its Adirondack pasture. 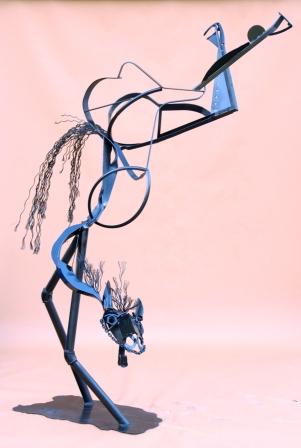 Last year, a piece commissioned by New York State through the Lakes to Locks Passage program, was installed and dedicated at the Knox Trail Pocket Park in Schuylerville. 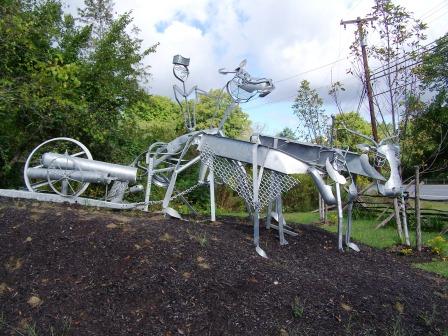 “Using a Model A frame or a ’63 Chevy grill is a way to draw the viewer in, a way to get them to contemplate other uses for discarded items,” she said. “And of course, it does a service to the planet.”

Born in New Jersey, miChelle, 45, moved to the area more than a decade ago and kept busy with a growing airbrush and pin striping business while also working with her partner, Chad Wilson, on custom fencing, railings and gates. In her spare time, she created sculptures, dozens of which are on display inside and outside her Ballard Road studio.

Much of her current work is commissioned by individuals seeking a specific design that will be showcased on their property – a process which miChelle said she enjoys most because of the close creative interaction with clients. She said she encourages design input and welcomes clients who stop in at the studio to watch the progress of the work. 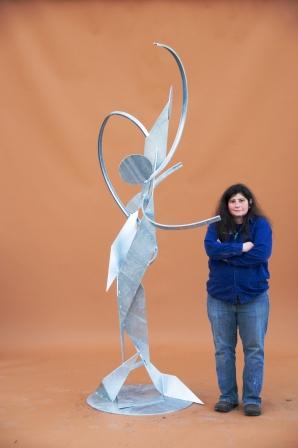 “During the design phase, I also spend time at the actual site to study the topography and the interplay of light and shadow that will influence how the piece is seen,” said the artist. “I need to know if the sun will come up on the piece, illuminate it all day or only spotlight it as the sun sets.”

Several new projects have consumed the past year, one of which is a 20-foot-tall representation of a mother and child.

“It’s abstract and simple,” miChelled explained. “But creating it hasn’t been so simple. I’ve been hanging off a frame, moving across an I-beam with trolleys and climbing ladders a lot.”

In July, miChelle’s sculpture of Henry Hudson and his ship, the Half Moon, will be part of the 400th anniversary of his passage up the Hudson River. The Quadracentennial event will be held at Kingston, with an opening reception on July 4th and exhibitions running through October 26th.

Her piece contains many of her signature elements, which often combine practicality and intentional humor. 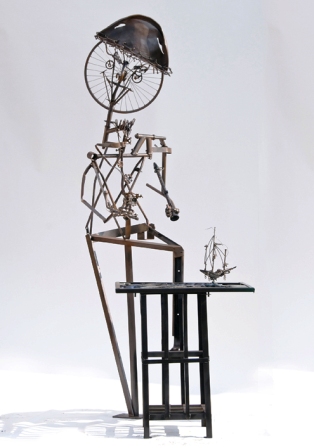 “I made his eyebrows out of bicycle pedals,” miChelle said, “and used nuts and bolts to represent his mind. His eyes are made out of old ship rings that were used to tie off boats, and I have a representation of Hudson’s actual map of his passage. I made a hole in the map, to represent the unknown – and also to show that he really didn’t know where he was going.”

To view some of miChelle Vara’s portfolio, visit www.mvarametalandpaint.com or contact her at 518-587-8706. 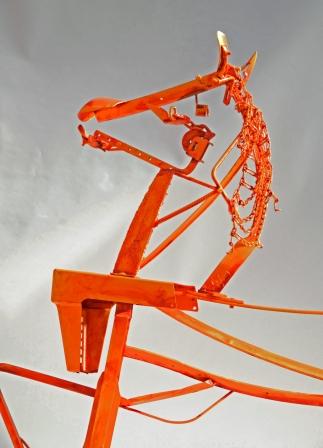