Visit Saratoga.com For Everything Saratoga
Enter Giveaways Advertise
Note: Saratoga.com is not responsible for posts and comments written by non-staff members.
Home  »  Mare's Musings  »  Racing Museum Robbery: They Stole from Everyone Who Loves Horse Racing.

It’s no secret that I far prefer the company of horses to that of humans.

Horses won’t lie to you. And surely, they won’t rob you of anything but your heart.
And people wonder why I say,
The more humans I meet…the more I love horses.
Wonder no more…
I am sick to my stomach, and more angry than I can fathom.
I have blood in my eyes.
I’m enraged.
I’m sure that once you read why I’m out-of-my-mind angry, you’ll feel the rage, as well.
That is, only if you’re a fan or horse racing…or of history.
Racing fans have reason to feel victimized today: some jerk has stolen a big chunk of our shared history.

The Museum was robbed last night. Some pig–cleverly disguised as a human being–broke into the Museum after hours, and stole five irreplaceable trophies. I’ll let you read it exactly as Brien wrote it.
I’d like you to stop slowly at the name of each trophy and horse who won–and seethe, as am I. I’ll write my reflections on this travesty following the release:
FOR IMMEDIATE RELEASE
Contact: Brien Bouyea
(518) 584-0400 ext. 133
nmrmedia@racingmuseum.net
Sept. 13, 2013
National Museum of Racing statement on Thursday night break-in and theft
SARATOGA SPRINGS — Five trophies that were on display at the National Museum of Racing and Hall of Fame were stolen during a smash-and-grab burglary late Thursday night. The Saratoga Springs Police Department is investigating the crime.
The trophies stolen are:
• 1903 Belmont Stakes Trophy, won by Africander
• 1903 Brighton Cup Trophy, won by Hermis
• 1905 Saratoga Special Trophy, won by Mohawk II
• 1914 Brook Cup Handicap Steeplechase Trophy, won by Compliment
• 1923 Grand National Steeplechase Trophy, won by Sergeant Murphy
“These trophies are irreplaceable. We are saddened by this unfortunate event and hopeful that the investigation leads to the apprehension of the individual or individuals who committed this crime and the return of the trophies,”
said Christopher Dragone, Director of the National Museum of Racing and Hall of Fame.
Anyone with information is asked to contact the Saratoga Springs Police Department at (518) 584-1800. Please direct any inquiries about the investigation to Saratoga Springs Police Department Investigations Lieutenant John Catone.
The Museum will be closed until Sept. 19.
www.racingmuseum.org 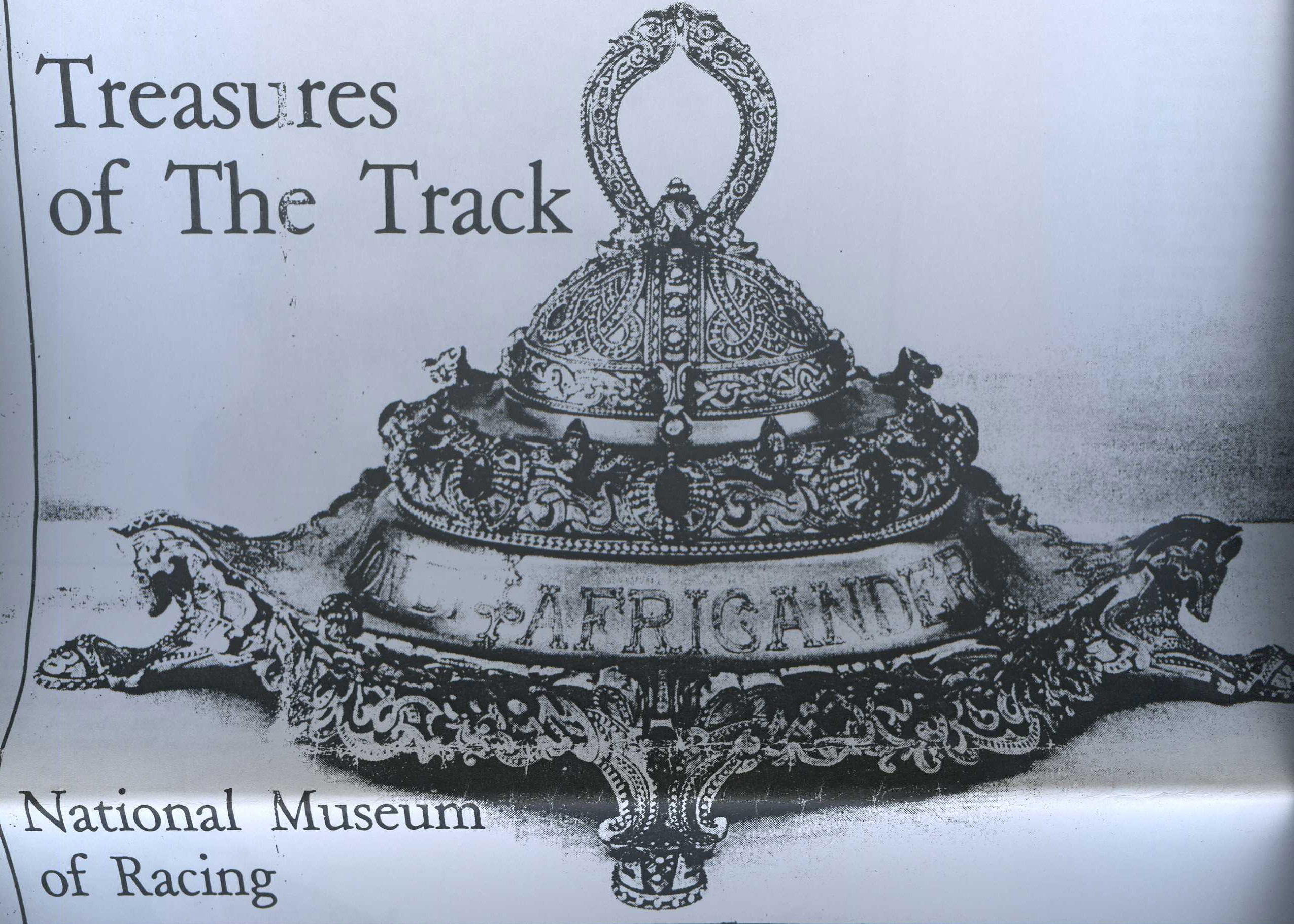 It’s me again. Doesn’t that make you want to break something–like, the head of the perpetrator?
Here’s the deal. Some *^$&@^^__+** broke into OUR Museum, and stole OUR history.
* S/he didn’t just rob a bank–that’s only money.
* The jerk didn’t take jewelry–even the most expensive jewelry is really just crystals from the Earth, hammered out into stones.
NO. What this person did was victimize every single person who loves the sport of horse racing–not just in the United States, but anywhere that horses of ANY breed are loved and raced. 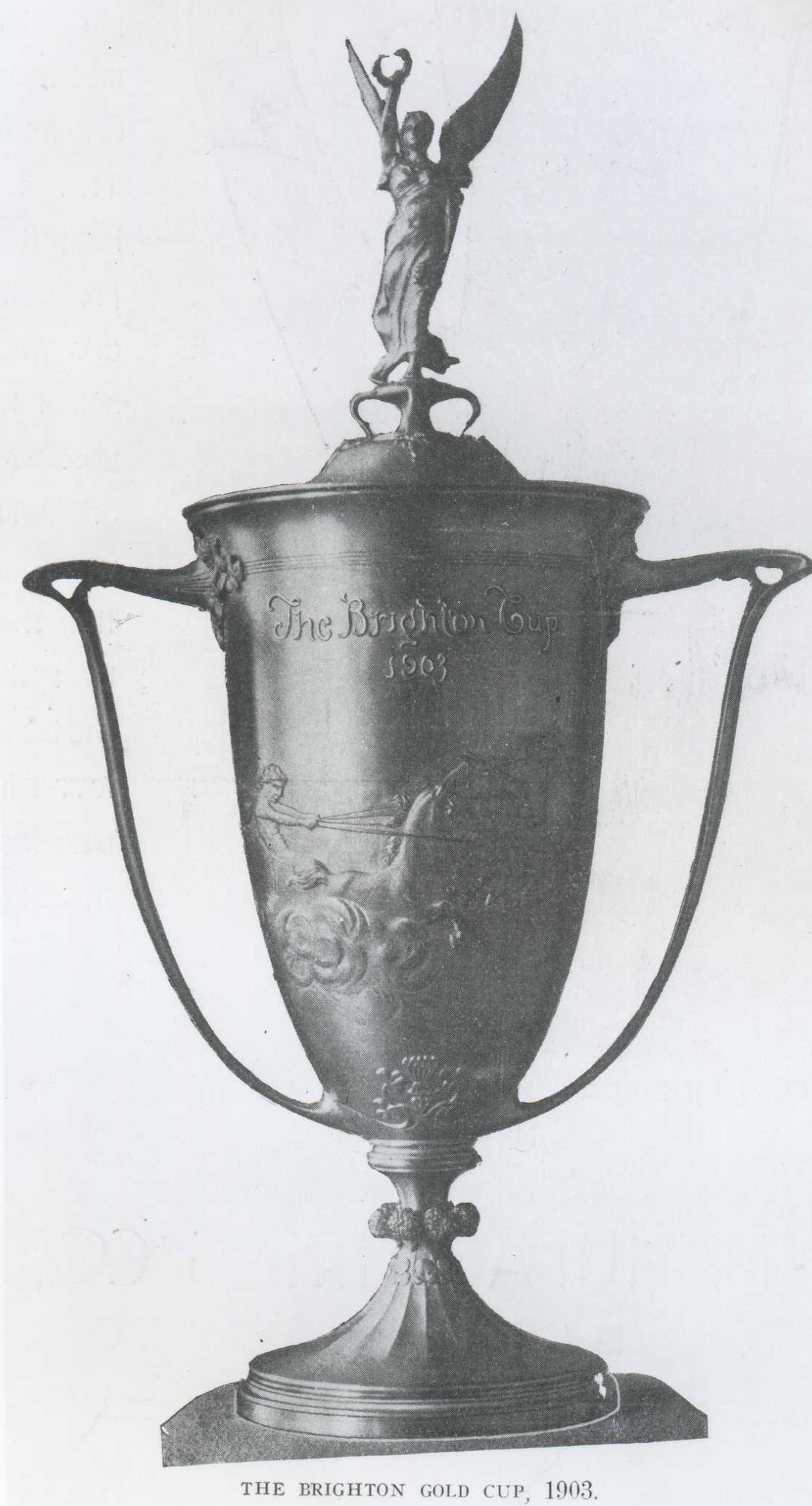 Humans and horses share a relationship that spans eons–many thousands of years. Arabian horses have raced for at least 5,000 years. The sport of humans, taking the world’s most beautiful animals and racing them against each other, is almost as old as written history. 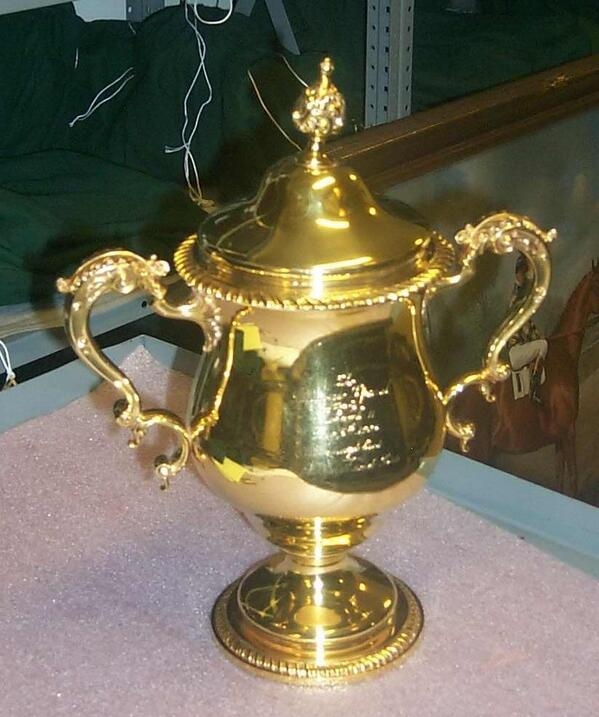 The five gorgeous trophies that were pinched from the Racing Museum are specific to the history and glory of horse racing in America–but in a very real sense, they represent all the blood, sweat, tears, love, commitment and admiration for The Horse that is ingrained in the human soul.
Even the historic discovery of metals and their many uses speak of the history of humanity: the first racing trophies may have been made of wood. But eventually, people realized that metal made a more lasting tribute--and that the enduring nature of metal trophies represent the eternal nature of The Horse, her/himself.
That the love and relationship between our two species could be represented by the strength of metal, and that a trophy would be around long after the particular horse and her humans left this earthly plane. 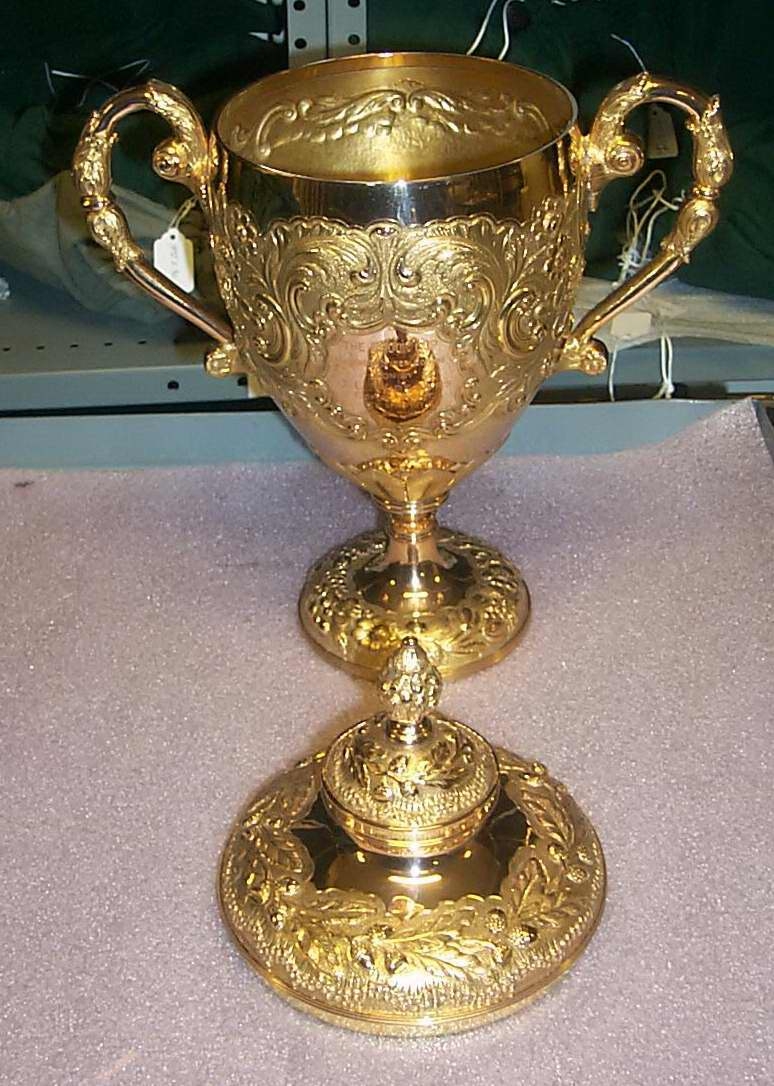 So the Visigoth who thought that they were being funny–or who thought that, d’oh, they could sell the trophies through eBay or CraigsList–has taken far more than beautiful, old pieces of metal from a museum in upstate New York.
What they took was our shared history. Our collective glory.
An actual metaphor for the connection between Horses and Humans.
They stole a piece of our souls when they took our historic trophies out of the Racing Museum. Not just Saratogians–not just fans of Saratoga Race Course–not just of fans of Thoroughbred racing.
Every person on this planet who loves our sport–who connects with a horse, of any breed, as s/he runs like the wind–lost a great deal in the theft of five Thoroughbred racing trophies. Every one of us lost a road marker, that points us toward Home. 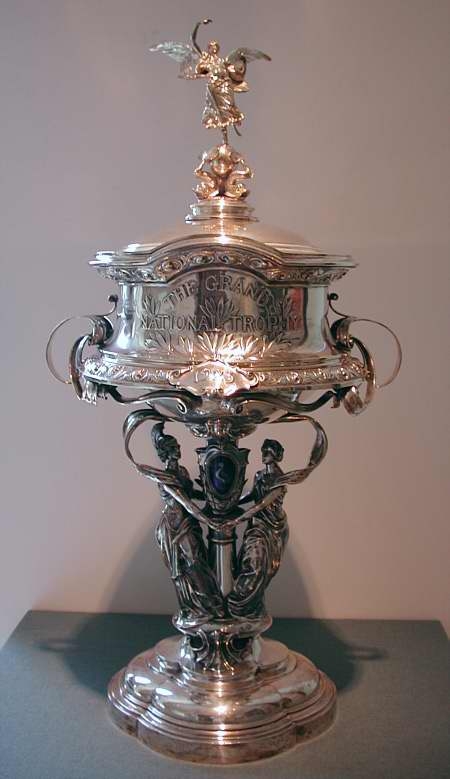 If you’re reading this and you love racing–wherever you are on Earth–I ask that you join with the Saratoga Springs, New York (USA) police–with the administrators of the National Museum of Racing and Hall of Fame–and with other race fans–to find those trophies and the worthless idiots who stole them.
Please look at these photos–cruise eBay, CraigsList and other online auction houses. Look at collectible sales, and pawn shops. Anyone who’s that stupid–to steal a chunk of history–surely is too stupid not to get caught.
Thank you for helping us–for helping yourselves–to recover a part of our shared heritage.
We all lost something valuable last night. Perhaps, together by working and sharing the word–we can recover it, as well.
And if these trophies somehow end up in the hands of some wealthy collector: be forewarned. Whoever you are, I plan to beat you, myself. (Although I may have to stand in line for the privilege.)
Credits:
Logo, photos, courtesy of National Museum of Racing and Hall of Fame